You’ve seen drivers tackle amazing feats before,whether they’re juggling three things at once or maneuvering dangerously through traffic. What you usually don’t see is the ticket or accident that results from these driving habits—unless you’re that driver, of course. How do you avoid these types of drivers and driving habits, you might ask? We’ve got you covered. 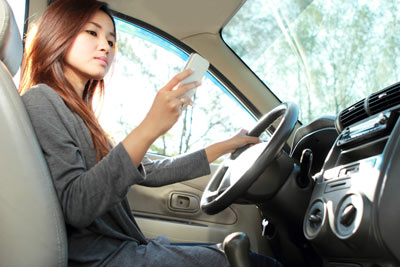 Distracted and aggressive driving are two of the most common causes of car accidents. And most of us are guilty of at least one (sometimes both) at times. Think about it: You’re leaving work and get stuck behind a slow car. You just want to get home, so you tail the slow car and swerve out to pass it at just the right moment. You have to make the next turn, so you dart over to brake in front of traffic and skid into your turn. This is a classic example of aggressive driving.

If that’s not an issue, try this one: You’re headed to a meeting, but you can’t remember the address. You text your colleague and put the address in your phone’s GPS—all while you’re driving. No big deal. It only took a few seconds. You keep checking your phone to make sure you’re taking the correct turns. Sound familiar?

The point is many of us struggle with a handful of bad driving habits. To decrease the probability of getting a ticket or being involved in a car accident, though, you just need to develop new habits and learn which of the old ones to drop.

Lane blocking, tailgating, explicit gestures, honking horns, parking in more than one space, inappropriate use of high beam headlights, blocking traffic, not using blinkers and displaying road rage are all considered aggressive driving behaviors by the Department of Motor Vehicles (DMV). Whew, what a list.

The National Highway Traffic and Safety Administration breaks it down by explaining that aggressive driving happens when “an individual commits a combination of moving traffic offenses so as to endanger other persons or property.”

So, what do you do when your patience for five o’clock traffic runs out? Try relaxing, giving other drivers the right of way and the benefit of the doubt, and realizing it’s more important to arrive safely than not at all. Who knows, a shift in your own attitude may just make it easier to accept the traffic for what it’s worth—a minor inconvenience that will pass.

The best option, according to the DMV, is to avoid all conflict if possible. Relax, take a deep breath and get out of the way, even if you are right.

“Recognize the absurdity of traffic disputes and focus on what is really important in life,” DMV experts suggest. “Save your energy, and your life, for something worthwhile.”

Distracted driving ranks third among the largest causes of road fatalities, according to the National Safety Council (NSC), and the National Highway Traffic Safety Administration describes three types of distraction: visual, manual and cognitive. Basically, anything that takes your eyes off the road, hands off the wheel or focuses your mind elsewhere is a distraction that should  be avoided.

Making a call or checking emails, texts, Tweets and voicemails (come on, who’s guilty?) may seem harmless enough to do while driving, but each concession only leads to more distraction and a higher risk of having an accident.

According to distraction.gov, “Engaging in visual-manual subtasks (such as reaching for a phone, dialing and texting) associated with the use of hand-held phones and other portable devices increased the risk of getting into a crash by three times.”

And the NSC debunks the myth of being able to multi-task while driving—the brain can switch between two activities quickly, but it can’t do them at the same time. A sobering stat? According to distraction.gov, the average person takes their eyes off the road for five seconds to send or read a text. When traveling at 55mph, that’s enough time to cover the length of a football field. And it’s like doing so blindfolded. Avoid adjusting the mirrors, as well. It can wait until a light!

Being a defensive driver means being alert to dangerous situations (and being ready to respond to them) before they happen.

General safe driving practices are part of being a defensive driver, too. Check your mirrors before making a clear lane change, use your blinkers, increase your following distance to avoid collisions in front of and behind your car, check your phone once parked and drive without letting anything affect your emotions.  Realize that the kids arguing in the backseat isn’t that big of a deal.

Looking out for other cars and potentially hazardous situations can prevent collisions and save your life or someone else’s. DMV officials remind us that it’s important to understand that we can’t control the traffic, but we can control our reaction to it.

How To Avoid Driving Distracted

From school to soccer practice to meetings, here are a few ways to stay focused while driving:

Munch in the parking lot. Eating takes at least one hand—and that’s not including handling the ketchup, drink or napkins that you might need. Don’t set yourself up to fail. Pull over, and enjoy your meal.

Wear sunglasses. If it’s bright and sunny outside, it can be hard to focus on the road. Keep a pair of sunglasses handy to keep the glare out of your eyes.

Let your bag fall. When something falls to the floor while you’re driving, don’t worry about picking it up until you can pull over or park. In order to stay focused, you’ll need to keep your eyes on the road and hands on the wheel.Source: dmv.dc.gov

Here, in Florida, texting while driving is a secondary offense for all drivers. That means you can’t be pulled over just for texting. A police officer must charge you with violating a primary law before tacking on the texting penalty. So, if you get pulled over for reckless driving and the cop finds out you were texting, you’ll probably get a ticket for both.

For now, it’s still fine by law to talk on the phone while driving. That doesn’t mean it’s a safe plan, though. In fact, the NSC found that “the activity in the area of the brain that processes moving images decreases by up to 1/3 when talking on a phone.” And, 10 states plus Washington, D.C. have made all cell phone use illegal while driving. Maybe Florida will be next.

“Access to crash videos has allowed us to better understand the moments leading up to a vehicle impact in a way that was previously impossible,” says Peter Kissinger, president and CEO of the AAA Foundation for Traffic Safety.

The following are the most common sources of distraction, according to AAA:

15% Interacting with one or more passengers

10% Looking at something in the vehicle

9% Looking at something outside the vehicle

6% Reaching for an object 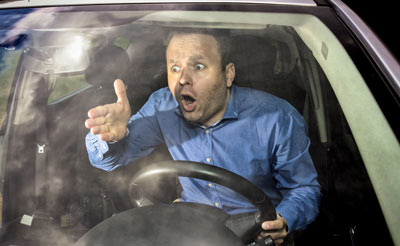 All About That Rage

What to do when…

Increase the following distance between you and the car in front of you. Your “tailer” will most likely pass you. Or, switch lanes and let them go by. Doing this will put an end to the situation before it has the chance to make you or the other person angry. (If it makes you feel better, you’ll probably see them sitting at the next red light… only a couple of cars ahead of you.)

Someone cuts in front of you:

Brake and try to avoid honking unless you are in danger—no need to instigate anger. When another lane is open, switch for a while. It’ll detach you from the situation.

Someone flips you off:

Don’t flip a bird back. That’ll only fuel their animosity toward you. The best thing to do is to act emotionally unaffected—avoid eye contact, racing, swerving in their direction, tailing them or slowing down in front of them. They can’t take their road rage very far without acknowledgement. Just remember, you never know how far a person may take their anger. Don’t engage them.

Someone starts following you:

Don’t head home. Instead, drive to the nearest police station or crowded public place to get help.