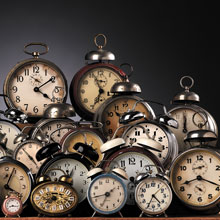 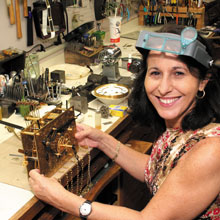 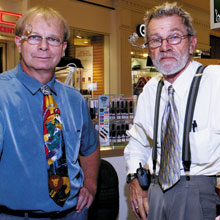 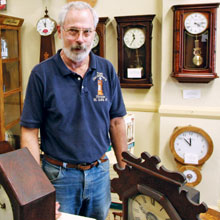 Time is that precious commodity that flies when you’re having fun and drags like molasses on a cold day when you’re doing something you don’t enjoy. Time can pass, run out, and march on. It’s all in the timing until time’s up. There’s once upon a time, time after time, one day at a time, and time and time again. OK, time’s wasting. Time machines have been around for a long time. The earliest people kept time with sundials, hourglasses, and water clocks. Prehistoric man measured it by the sun, the stars, and the changing seasons. Poles and sticks gauged the movement of the sun to determine what time of day it was. Watches and clocks have become essential, convenient, and fashionable. And apparently, people love them. According to the owners of three local watch and clock shops in the area—The Clock Shop, Art’s Work Watch Repair, and Thee Clockmaker’s Shoppe—people like to keep their watches and clocks running like the precision machines they are supposed to be.

John and Helen Carden of Eustis own The Clock Shop, which looks like a typical repair shop at first glance. A long bench runs along two walls and holds an assortment of small drawers, an array of tools of all sizes, and clocks in various states of repair. Some have all their insides missing and are waiting to be restored to their former beauty. Around the shop, other clocks tick gracefully, clanging or bonging on the hour. There’s even an hourglass that gauges life with the “sands of time.”

The shop really does feel like a different time zone.

Helen learned her about watch repair and clock making from her father, who came to America from Italy, and she still has his workbench and stool in her shop.

“I love it,” Helen says with her youthful smile. “It’s like being in a different time period during the day because of all the clocks in here. And I love hearing the stories that go with each clock.”

Helen went to work with her dad when she was 20 and then apprenticed with Chuck Way, a well-known watch and clock maker in Orlando. She then worked with Marvin Phillips before coming back to Lake County to The Clock Shop in Leesburg, eventually buying it in 1996. Helen and John moved the shop to Eustis where John concentrates on repairing watches and Helen focuses on clock repair.

The Cardens work with a number of clock collectors. Their shop on South Bay Street in Eustis houses an array of clocks, from authentic cuckoo clocks to one of the amusing rhythm clocks. These clocks, with their variety of musical selections and moving parts, are almost a form of entertainment. But not far away from these modern marvels sits a gilded clock that dates back to 1904, along with grandfather clocks that have outlived many grandfathers.

Carrying on another tradition her father began, Helen now has David Miller as an apprentice in her shop.

“I did a house call to work on a clock for his grandmother,” Helen recalls. “I could tell David was interested and had knowledge about the mechanical things I was doing, so I asked him if he wanted to apprentice here.”

That was four years ago. David still thoroughly enjoys his chosen profession.

“I was being home schooled, and my mom let me come in a couple of days a week,” David says. “A lot of the repairs we do are for sentimental items. I like that.”

Deborah Sherman also works with the Cardens and David. She loves the cacophony of sounds in the clock shop.

“Some people are bothered by the noise, but some miss it when it’s not there,” she says. “That’s why they want their clocks repaired.”

There’s a timeless quality that seems to draw people of all ages to beautiful watches. For some, they’re status symbols; for others, they’re a necessary part of the workday; for still others, they’re collectibles or art.

“I have a customer who has an art display of watches in her home,” says Tom Pearce, who works with his father-in-law at Art’s Work Watch Repair in Leesburg. “She keeps them all set for the same time, and she brings them in here for service.”

According to Tom and his father-in-law, Arthur Hanson, finding a place that services and repairs watches can be difficult. Arthur, a former dental technician in the U.S. Navy, found the same skills were useful for fixing the delicate machinery on watches when he took a course at Orange County Vocational Technical School.

“I like working with my hands, and I learned there’s a dire shortage of people in this industry,” Arthur says. “People tend to fix them because they want to keep them for a long time. We help them do that.”

Roy Gress, of Thee Clockmaker’s Shoppe in downtown Mount Dora, learned about repairing clocks from his father-in-law who had once been a heavy equipment mechanic.

Jay Greystoke works with Roy, and you could say he learned the trade as a result of a chance encounter 26 years ago.

“Dick Thomas was a well-known jeweler in Leesburg,” remembers Jay. “When Dick retired, he opened a clock business and asked me to help him put in a burglar alarm. While I was working on the alarm, he asked if I’d ever repaired a clock.”

Jay found an old clock and took it apart. He thought the spring no longer worked until he touched it and parts of the clock flew everywhere.

“Dick asked me if I learned anything, and then he grabbed an old kitchen clock and handed it to me,” Jay remembers. “One thing led to another, and I got an informal apprenticeship from a very knowledgeable craftsman.”

The sentimental attachment that most people have to clocks makes the cost of repairing or rebuilding them miniscule.

“I have a clock on my desk that was a wedding present to my grandparents. Years ago, I fixed it up and gave it to my mother,” Jay says. “She got tired of winding it, so it’s mine now.”

Owners of the area’s clock and watch shops say that some of the newer stuff just isn’t worth repairing. But older timepieces are a different story.

“The older, mechanical clocks—and even the newer Howard Miller and Ridgeway Clocks—are heirlooms,” says Jay. “There’s an awful lot of sentimentality attached to them.”

Whether it’s a family heirloom or a watch that’s been a trusted companion for many years, a clock or watch becomes a part of your personal history and is often worth keeping.

It’s About Time
A checklist of 10 notable films concerning clocks.

Once Upon a Time in America, 1984,
starring Robert DeNiro and James Woods

Once Upon a Time in the West, 1968,
starring Henry Fonda and Claudia Cardinale