It was a job for angels—NASCAR Angels to be exact. The syndicated show that airs on some ABC affiliates and on www.nascar.com can be best described as Extreme Makeover meets Car Talk. Since the program’s debut in 2006, hosts Shannon Wiseman and Rusty Wallace have seen their share of clunkers, but the 1995 Jeep belonging to Bushnell’s Keith and Charleen Douglas was beyond heavenly—or earthly—intervention. 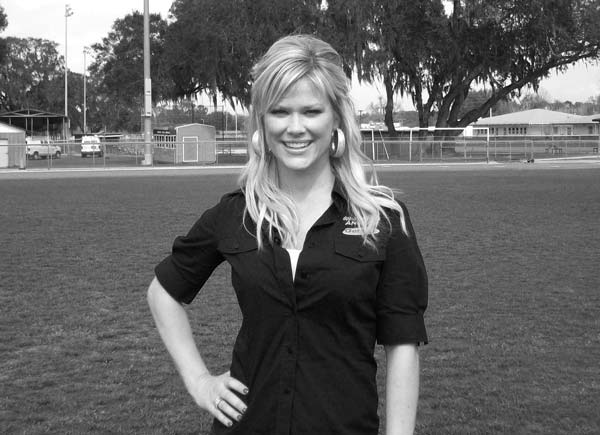 “Angels, are you out there?” Keith wrote to the program, hoping they could answer his prayers for reliable transportation. “If you or anyone you know of could help us find a reliable minivan at reduced cost, we would be eternally grateful.”

The plea for help wasn’t for himself but for his granddaughter Sydney Marie Mullarkey, who was born with two life-threatening ailments: cystic fibrosis and complications from laryngeal papillomatosis, a disease consisting of tumors that grow inside the larynx (voice box). Keith described how his wife, Charleen, and her daughter, Caitlin Mullarkey, must drive Sydney to Orlando for doctors’ appointments several times a month.

Keith devoted much of his letter to describing how life had changed dramatically since Sydney’s birth on September 17, 2006.

“The day after she was born she had major bowel surgery,” he wrote. “The first three months of her life she was in the intensive care unit.”

Because she has short bowel syndrome, a side effect of cystic fibrosis, Sydney needs to be fed every hour and a half or two hours. At night, she’s hooked up to a machine.

“Kids with CF have a hard time gaining weight because the mucus builds up in their pancreas and won’t allow as many nutrients to get through to their system,” Charleen explains, “so that’s why she needs the extra calories.”

Sydney also has to have surgery about every two months to remove the cysts on her throat.

“The disease slowly closes her throat, so she has a hard time breathing, swallowing, speaking, or making sounds,” Keith says. “The long-term effects of throat surgery could affect her speaking ability, so just as a precaution we’ve taught her sign language.”

In addition to Caitlin and Sydney, their son Craig, who has Down syndrome, lives with the couple. They are expanding their house to fit them all. Keith works as a civil engineer at MacDill Air Force Base, and Caitlin, 21, works long hours at Dunkin’ Donuts.

Keith and Charleen have drained their retirement accounts to take care of Sydney, Caitlin, and Craig. There hasn’t been enough money left over to replace a rickety vehicle.

“We are doing our very best to extend the length of her [Sydney’s] life,” Keith says, “and make it as full of joy as we possibly can.”

After several interviews, both over the phone and in-person, the family was selected to get their vehicle refurbished by NASCAR Angels. With the help of NASCAR partners, like Goodyear and local auto centers, the Angels fix cars and explain the process to the program’s viewers. However, as the NASCAR Angels crew dissected the Douglas’ old red Jeep, the evidence was clear—it was going to take more than a tune-up and new brakes to keep the wheels rolling for the family.

Crew chief Rick Hunter disappeared during the filming of the episode long enough to find a van with only 80,000 miles. Complete with a DVD player to keep Sydney entertained, the van would be more dependable and comfortable for the family.

As with all television shows, a little more fanfare than just handing over a set of keys was required. In the episode filmed at South Sumter High School’s football field, NASCAR Angels host Shannon Wiseman said, “It was just too quiet.”

So, on an unusually hot day in February, high school seniors at South Sumter High School were called in and prepared for the “reveal.” Dunkin’ Donuts provided snacks. Harried crewmembers hurried to and fro.

“They’re a beautiful family in a beautiful town,” said Shannon who looked on with satisfaction. “They’re what families should be like.”

After countless takes, the crew tries to keep the students’ energy levels up. It’s time to welcome the family.

“This family comes every Friday to the football game,” Shannon tells the crowd. “Hey guys, are you excited?”

As they speak, a 2000 Chevy Astro slowly makes its way down the field, and the crowd goes nuts.

“We were expecting to turn around and see an immaculate and beautiful Grand Cherokee,” Keith says. “But we got this even more beautiful and immaculate van.” 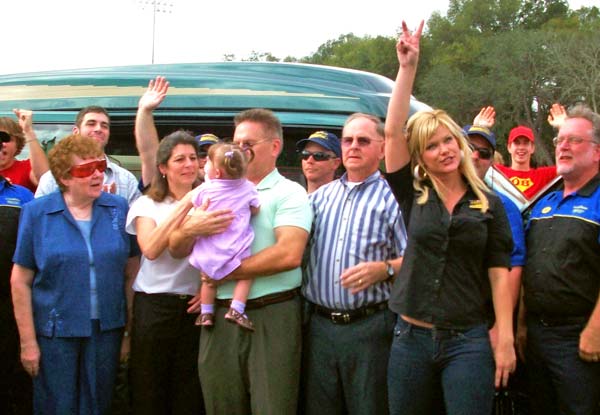 With a little help from some NASCAR Angels, Keith and Charleen Douglas of Bushnell received a much-needed automobile upgrade to transport their granddaughter to and from medical appointments in Orlando.

NASCAR Angels fooled the family by telling them how well the repairs were coming along on the Jeep.

“You can see in my letter I say we really wanted to get a van because we could fit everybody in there,” he said. “We had no idea that would really happen until we were at the event.”

Although the episode doesn’t show it, Keith and Charleen also got the Jeep back—with quite a few repairs courtesy of Hunter’s auto center.

The other big “reveal” during the show was a $5,000 gas gift card from Dunkin’ Donuts that Shannon pulled out of a coffee cup. Charleen and Keith were also given garage and pit passes during the week of the Daytona 500, where they met Rusty Wallace, the other NASCAR Angels host.

Keith and Charleen say they have much for which to be grateful.

“The van has been awesome,” Keith wrote in a follow-up e-mail to NASCAR Angels. “This has been a dream come true.”

Need More NASCAR?
Catch a repeat of episode No. 214 online at
www.nascar.com/auto/angels/episode_guide.html
to see more about the Douglas family.