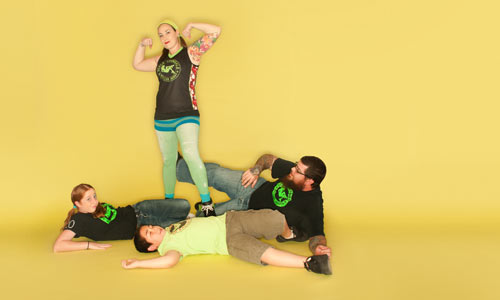 On their website, the Ocala Cannibals are streaked with fake blood, their faces smudged with neon and black eyeliner. They go by such menacing monikers as “Bonesaw Betty” and “Majickal DEATH Poni.” I have to remind myself that the skaters I’m about to interview are just your regular carpool moms by day.

I get to Skate Mania—where they hold practices and bouts (games)—at 5pm, unsure if I’m prepared to meet a pack of brawling, hard-hitting mommas. I ring inside, and the sight that greets me is… a flock of screaming children at daycare. Perhaps I was a little too overeager arriving an hour early. Eventually, the tribe of kids disperses, replaced with the brutal mistresses of the Ocala Cannibals. In truth, you find what is to be expected of a roller derby team—and more. Skaters wearing multicolored tights, their arms inked with tattoos, chatting with fellow teammates dressed in tank tops and yoga pants. A few who snap on helmets look like they’re in their mid-30s, while some changing the wheels on their skates seem to be still in high school. It’s a diverse crowd of women united for the love of the sport.

You’d expect the mother skaters to live double lives, like comic book superheroes. I realize this isn’t the case when the first skater I interview brings in her cavalry: her husband and two children. Because the skaters call each other by their derby names, I decide to follow suit.

“Jane DoughpuhMEAN,” or Camille Loose, 27, is the mother of Ashlyn, 13, and Jimmy, 11. A homeschool mom and homemaker, she has been a jammer and blocker for the Ocala Cannibals since 2011. The derby scene requires a certain degree of mettle from its players.

“I’m not a fighter by nature,” Jane says, “but on the track, I give it everything I have.”

Ashlyn and Jimmy can attest to their mother’s transformation. When I ask Jane’s kids what happens when their mom takes on her alter ego, Jimmy says, “She’s going like that,” and twists his face into a mask of concentration and ferocity.

Jane draws support from her family members, whom she calls her biggest fans. Ashlyn and Jimmy usually attend practices, always encouraging their mom to do better.

“Some friends of mine who are moms find it takes up too much time and dedication,” Jane says. “My kids help out—being an obstacle in our way, throwing balls for a game of dodge ball. They’re not abandoned.”

Ashlyn hopes to one day join her mom on the rink. The age requirement to play roller derby is 18 and older, but an Ocala Cannibals’ junior derby league may form in the near future, where kids can play without full contact. For now, a current goal of the league is to expand and recruit more members.

“One of the biggest misconceptions is you need to know how to skate before you join,” Jane says, “but we teach all the skills you need to become a skater. Another misconception is a lot of people think you can elbow opposing skaters.”

Roller derby, while a contact sport, prohibits fighting, tripping and the use of the head, elbows, hands and feet to block a player. Jane follows the rules, but that doesn’t stop her from wearing her war face when she’s on the track.

Before meeting Jane’s fellow teammates, I couldn’t resist playing a round of one of Ocala Style’s favorite word games. For those of you who aren’t familiar: I say a word or phrase and the player must say whatever word or phrase pops into her mind first. Go! 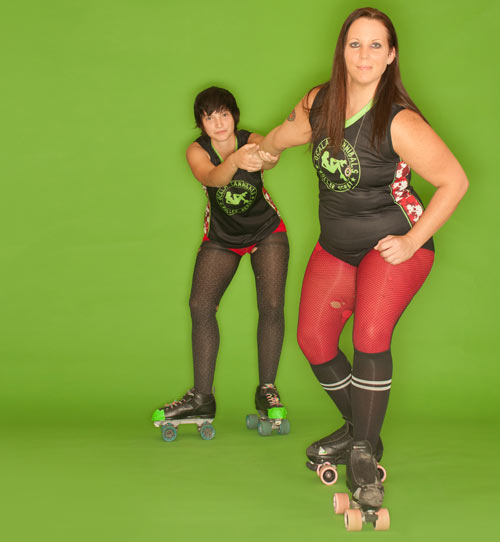 Shannon Donovan, aka “Fingaz Feltersnatch,” 33, is a restaurant server and mother of two who became a member of the Cannibals in August 2010. Taylor Stephen, Fingaz’s 17-year-old daughter, joined her mom on the team only months later. While Taylor, who’s yet to choose a derby nickname, says she isn’t the “better” skater, she had more experience on her quads (in-line skates) than her mom. Fingaz admits her daughter is the better of the two when it comes to backward skating.

Because Taylor was 16 when she joined, the team had to sign a waiver and write an essay to the league in order for her to be able to play. While Taylor can practice with the team, she isn’t allowed to play in bouts until she is 18, which won’t be until November. School activities—Taylor takes advanced classes and is in the IB program—also limit her time on the track. After high school, Taylor plans to continue roller derby and attend the University of South Florida.

“My friends who know that my mother and I play roller derby together think that it’s pretty cool,” Taylor says.

As for friends on the rink, Taylor senses fellow skaters are wary when it comes to push and shoves. Their hesitation is apparently with good reason.

“I’m a little overprotective when she gets hit,” Fingaz says.

Of course, there’s always another side to having your mom on the same derby league.

“My mom won’t hold back anything when she hits me,” Taylor says.

While Taylor got full acceptance from her mom when she wanted to join the league, Fingaz’s own mother wasn’t as supportive. When Fingaz started playing, her mother was against roller derby, thinking it’d take time away from her kids.

“But she finally came to one of my bouts and understood it a lot better,” Fingaz says. “It’s the only thing I did for myself, so I didn’t back out of it.”

“Make time for yourself, and don’t feel guilty about it, because I went through a lot of that. It’s OK to be a little selfish sometimes.”

She also wants to put the skater stereotype to rest.

“A lot of people judge you. They think roller derby skaters are just a bunch of misfit girls, when we’re really just a close family who tries to help each other when we can. I’ve never met better friends.” 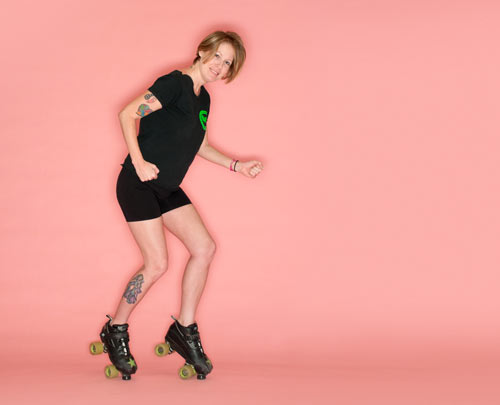 “I want to push myself to be the best I can be.” —Bonnie Love, “Kamel Toepedo”

Fingaz recruited her friend Bonnie Love, 36, alias “Kamel Toepedo,” the same year she joined, in 2010. Like Fingaz, Kamel is the mother of a 17 year old and also has a 5 year old. Amber, her oldest, eventually wants to join the Cannibals, but Kamel says her younger daughter Mia is probably the poster child for derby.

“She’s rough and strong for a 5 year old; she can almost knock me down!”

Kamel and the other skaters know all too well appearances can be deceiving.

“Everybody thinks roller derby skaters are just a bunch of women who party all the time, and we’re so rough that all we do is start fights,” says Kamel. “We have people from all different states, different types of families, nurses, bankers, servers. It’s like a rainbow of people. You definitely can’t stereotype anybody.”

Kamel, who is a nurse, uses herself as an example.

“What you see on the outside on me are tattoos, but during the day, you see scrubs.”

As a mother and fulltime nurse, Kamel does her best to make time for roller derby and give her all on the rink.

“I want to push myself to be the best I can be,” she says. “I’m a very competitive person. I compete against myself. It’s about what you can tell yourself to do. You’ll do this better if you challenge yourself.”

While Kamel and the other skaters I interviewed haven’t had any broken bones, bruises tend to come with the territory, and Kamel says she’s landed wrong on her knee a couple of times.

“I’ve went as far as having steroid shots in my knee,” she says.

The skaters endure these scrapes together, drawing strength as a sisterhood.

“I enjoy the atmosphere and hanging out with the girls. There’s a bond between all of us. If anyone needs anything, we can always call on the team. It’s definitely like a family.”

And now, for the last round of Ocala Style’s Word Game! Kamel is in the hot seat…