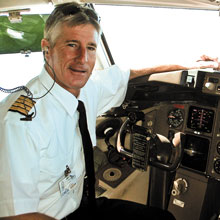 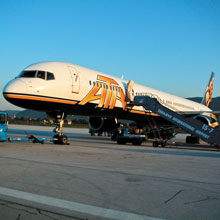 Tens of thousands of troops have crossed paths with Lake County’s Paul Hutchings.

In the past nine years, Paul, a pilot for ATA Airlines, Inc., has transported troops across the country and overseas, making stops in Kuwait, Germany, Ireland, South Africa, and Japan. Closer to home it’s been Dallas, Texas, and Bangor, Maine.

“I’ve talked to a lot of soldiers. It’s just unbelievable to me—the morale of these guys,” he says. “A lot are going over [to Iraq] for the fourth time. They’re ready to go. They’re not groping around. They know what their mission is and they’re going to do it.”

Paul says the soldiers have told him about how they have built new schools, bridges, and roads.

“When you talk to these guys, they are proud of what they have done over there and the people are very appreciative,” he says. “You can’t help but think it’s good when you’re building things.”

Not all stories end happily, though.

“You hear about it [the death of buddies],” he says. “They talk about it. It’s not something they dwell on.”

Paul’s schedule usually includes 18 days on and 12 off. When he’s not flying, he is resting and relaxing at home in Tavares with MyLinda, his wife of 19 years. He often has to spend a day or two getting to his own destination prior to flying the military charters.

The routes usually include one or two legs, and a recent route included eight stops—Amsterdam, Egypt, Jordan, Oman, Bangkok, Japan, Hawaii, and Los Angeles. The nine-day trip took him completely around the world.

Paul, who flies a 757, says the plane can hold about 250 soldiers, but usually has around 150. One trip included dropping off troops in Africa, south of the Sahara Desert, where brush lands are prevalent. The landing strip certainly wasn’t the largest he has seen.

“I wasn’t worried about it,” he says. “I know what the airplane can do.”

Prior to working for ATA Airlines, a division of Global Aero Logistics, which has 65 percent of the military contracts from the Department of Defense, Paul worked as a pilot for nearly 12 years with Mesa Airlines.

The Dallas-Fort Worth International Airport and the Bangor, Maine, Airport are common destinations for soldiers coming home as part of the U.S. Central Command’s Rest and Recuperation Leave Program or the Air Mobility Command’s R and R flight operations.

“The objective is to get them (stateside) and to get them to their families and to their destinations as quickly as possible,” said Maj. Gen. Frederick Roggero, director of Air, Space and Information Operations for Headquarters AMC, as he greeted service members last June when ATA delivered the 500,000th military passenger home.

The festivities in Dallas marking the 500,000th passenger weren’t all that unusual because the troops’ landings are regularly a time of joy.

“Every time we land in Dallas, a couple of fire trucks come out and fire the water cannons over the plane,” Paul says, “and there’s always a group of well-wishers greeting the troops.”

“It’s a whole different type of flying,” Paul adds. “Every trip is different. It’s not like an airline that flies a domestic route.”

Twice a year, Paul must pass the First Class Aeronautical Physical to keep his airline transport pilot license. To keep in shape, he practices yoga and waterskis. He also lifts weights—a sport he first took up in the fifth grade.

Paul, who earned a bachelor’s degree in exercise physiology from the University of Kansas, never thought he’d be a pilot.

After graduation, he managed several gyms. Eventually, he started his own business manufacturing fitness equipment. During that time, he earned his private pilot license.

Paul says he enjoyed flying so much that he pushed himself to earn his ratings quickly. Once he obtained his airline transport pilot license, he thought he could keep his business and be a pilot. He soon realized it was too much. He chose the skies.

“I just love flying,” he says. “I like operating big equipment. It’s a high-responsibility job.”

For now, Paul will continue to transport troops and work for ATA Airlines.

“It’s very fulfilling being able to transport our troops back from their missions safely and comfortably,” he says. “No war is a good war. I’m doing the job I’m supposed to do. I feel good about contributing.”