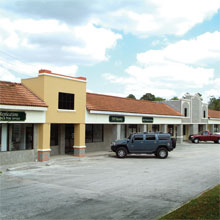 Ask anyone who deals regularly with the public and they’ll agree. Satisfied customers and repeat business are the most overwhelming endorsement any business can receive, whatever the line of work.

For Tom Sherman, owner and president of Ocala-based Trinity General Contractors, Inc., word-of-mouth recommendations from happy clients are the best validation of a job well done. Sherman clearly realizes the value of acting with integrity and it shows in his work. In just three years, the business has grown to a $4 million-a-year company.

With 26 years of experience in the construction industry, 18 of those in management positions, Sherman literally learned the business from the ground up. Born in Ft. Lauderdale, this Florida native started working in plumbing right after graduating from Ft. Pierce High School in 1980 and operated his own business in South Florida until 1992.

Tom and his wife, Shari, met in ninth grade and were high school sweethearts. When they traveled to Ocala one weekend in 1992 to visit relatives, they were so impressed with the friendliness of the people and the overall hospitality of the area that they decided they wanted to live here.

Leaving South Florida behind, the Shermans moved to Ocala with their four children, T.J., Ryan, Sarah, and Danny. Tom initially worked for a large mechanical contractor, and then served as General Superintendent for Atlanta-based Beers Construction, running day-to-day operations for seven years.

Tom’s work as a general superintendent kept him on the road for most of the week, away from home and family. So in 2003, he obtained his own general contractor’s license, becoming a state certified contractor in both Florida and New Mexico, in addition to his plumbing contractor state certification.

With Trinity General Contractors, Inc., Sherman is able to put his extensive knowledge to work for the benefit of his clients as he specializes in commercial construction — both new and renovations — in North Central Florida.

Sherman’s know-how and hands-on familiarity clearly play an important role. His extensive experience includes the $31 million Hard Rock Café project at Universal Studios, numerous hotels and recreation facilities at Disney and Universal Studios, correctional facilities, various projects for Lucent Technologies, and federal buildings such as the U.S. Courthouse in Jacksonville, an $84 million project. He was also general superintendent on the $68 million new construction and renovation project at Munroe Regional Medical Center, which included five floors, a 180,000 square-foot new addition, and a 60,000 square-foot renovation.

“Trinity General Contractors has done several different projects for us and is in the process of doing another addition now,” notes Dale Medina, owner of Hidden Pines Assisted Living Facility in Ocala.

“Tom is very honest and he has a great crew,” says Medina. “He’s great to work with and he knows what he’s doing. He tries to help you save money, which we all appreciate. The workmanship is top grade and everybody compliments it.”

“We hired Trinity General Contractors almost solely because of Tom,” remarks Pastor Ronnie Reid of Crystal River Church of God. The church is undertaking a $2.5 million project consisting of a new sanctuary and gymnasium, which will take 12 months to complete.

“This is a big step for us,” says Pastor Reid of the project, which began three months ago. “We met with probably six contractors and we really hit it off with Tom and felt good about him. We decided to go with Trinity because we felt like we could trust Tom and he was able to meet the price we had in our budget. During the process, we’ve not been disappointed at all. We’ve been elated and I recommend him to anybody looking for a contractor.”

“Trinity General Contractors has performed successful renovation projects on time, on budget, and with excellent working ethics,” says Jacob Nagib, facility engineer at Halifax Medical Center in Daytona Beach. “We always seek their help and expertise whenever the opportunity arises.”

“We call it the ‘wow’ effect,” Sharkey notes, referring to the Ocala Square project. “It was so drastic that people thought we tore the buildings down and started over, but it was all a façade that was built. The quality of the work is excellent and we’re having great impact on a neighborhood. Tom is a gentleman and a professional; he’s a pleasure to work with and I hope to do much more work with him.”

When Trinity General Contractors was recently hired to perform renovations within a hospital in Lovington, New Mexico, all of the work was done while the hospital continued its full operations.

“Trinity maintained a very clean working environment throughout the project, without disruptions or excessive noise levels,” notes David Shaw, CEO/administrator of Nor-Lea Hospital District. “The quality of the work was excellent.”

Trinity General Contractors is based out of a quiet, unassuming office on Lake Weir Avenue, just about one mile south of Cornerstone School. The company also has a branch office in Lovington, New Mexico, where Tom’s father and Trinity vice president, Robert Sherman, Sr., oversees operations on that end.

With his extensive background in building correctional and healthcare facilities, Robert Sherman has been involved in all phases of the construction industry since 1951. He coordinates project schedules, trades, safety control, and implementation of quality control on all of the New Mexico jobs, such as the nearly completed Nor-Lea Regional Hospital project.

For projects closer to home in North Central Florida, Tom Sherman relies heavily on his general superintendent, Mike Bradford, with whom he has worked for 20 years. Bradford brings a wealth of experience in supervision, quality control, project coordination, and scheduling to his position. Bradford’s background includes work on a wide array of construction projects, from federal buildings, schools, and churches to recreational facilities at Disney and healthcare facilities across the region.

Sherman’s oldest son, 23-year-old T.J., also works with the company as a superintendent.

Sherman has been the recipient of several awards, including two “ABC” Eagle awards, one “ACI” award, one “Best Overall 2002” award, and one “ABC” Excellent in Construction Craftsman award. Yet his greatest pleasure comes from satisfying clients on a day-to-day basis and spending quality time with his family.

“Operating with integrity has brought us a great amount of repeat business,” he observes. “And that says a lot.”

Looking to stand out from the crowd? Start at ground level. It’s frequently the first thing your customers will see. The appearance of walkways, sidewalks, lobbies, driveways, pool decks, and floors make a lasting impression before potential customers pull out their wallets to actually do business.

Through their CTI dealership, Trinity General Contractors, Inc. creates decorative concrete surfaces for a variety of projects — both exterior and interior. Durable, long-lasting, versatile concrete can be made to look just like marble, Terrazzo, or tile without any of the inherent disadvantages of those surfaces. No dirty grout to scrub. No worry about scratching marble or breaking tile.

Simply pick the color you want and enjoy attractive flooring that is sealed for easy cleanup and no maintenance.