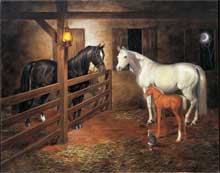 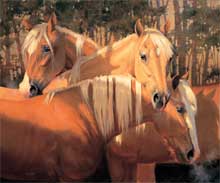 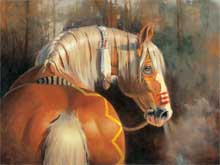 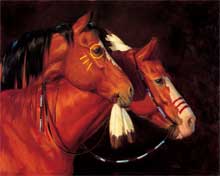 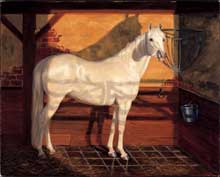 As an equine artist, Lynn Wade could be considered a late bloomer. But that description would have to quickly be amended to gifted-and-accomplished late bloomer.

After a lifetime as a horsewoman, at 40, Lynn embarked upon her second act — as an equine artist. Now 14 years later, Lynn’s success is unquestionable. The only dual full artist member of the American Academy of Equine Art, Lynn’s work has been juried into numerous national shows and garnered an AAEA Masterwork Award. She has authored and contributed artwork to the AAEA Sketchbook of Horses, been featured on the cover of Equus magazine, and received five nominations for “Best Drawing of the Year” by the American Horse Publications Awards.

Lynn’s work is represented by some of the most prestigious galleries in the country. Now living in Ocala, Lynn’s work is also being offered locally at The Paddock Room Galleries and at the King’s Gallery in The Villages.

The daughter of commercial artists, Lynn’s talent was inherent and the environment conducive.

“I remember at a very early age hearing my parents talk about how they saw the world around them,” she recalls on a recent afternoon at her in-home studio. “They wouldn’t just talk about what color something was, but about all the different shades of those colors and how the light affected things. I guess all of that soaked in without me even realizing it.”

Born in Washington D.C. and raised in the hunt country of Maryland, Lynn sketched as a child and poured over horse books illustrated by C.W. Anderson. But her early ambitions were directed toward hands-on interaction with horses. By the age of six, Lynn was competing on the hunter/jumper circuit. It was the beginning of her professional career as a horsewoman.

“I was horse crazy,” says Lynn, who would go on to own and operate a boarding/training stable, break Thoroughbred yearlings, and spend some time ponying racehorses at Santa Anita. “I really didn’t think of doing anything else.”

Things began to change in 1988 when a friend encouraged Lynn to try her hand at bronze sculpting. On a whim, Lynn submitted the resulting piece to the AAEA and it was accepted to its show at the Kentucky Derby Museum. And although it was a bronze that had gotten her there, it was at the AAEA show that Lynn fell in love with oil painting.

“Those paintings were the most beautiful things I’d ever seen,” she remembers. “Right then and there, I knew this was what I wanted. I wasn’t sure how, but I knew it was what I had to do.”

Then 40, Lynn didn’t see going back to college to study art as a viable option. So with some mentoring from equine artist Lanford Monroe, she began an accelerated learn-as-you-go education in oil painting.

“I got every art magazine and book I could,” she says. “I would spend hours and hours looking, studying, and tearing out pages in the magazines of anything that caught my attention. I started to see the common denominators in what caught my eye. Then I went to work and started painting.”

The home-schooling worked. The very next year, Lynn had two oil paintings accepted to the AAEA show. Her new career was officially underway.

“I owe everything to the AAEA and [founding member] Jean Bowman, and my dear unbelievably talented friends, Lanford Munroe and Robert Abbett,” she says. “They made me believe I could be an artist.”

After spending five years traveling the country in a 36-foot motorhome to go to AAEA shows and workshops, then living for several years in the art community of Taos, a combination of an art career and the area’s Thoroughbred industry pulled Lynn back to Ocala. She has since settled down on a small farm.

“It feels right being here again,” she offers. “I was here 15 years ago to work on a Thoroughbred farm and loved it. I always felt like I’d come back.”

Lynn’s focus on her career is obvious as the entire back half of her ranch-style home is devoted to her art studio. The expansive Florida room is filled with paintings and prints: framed on the wall, unframed in a wooden bin. There are large giclees rolled up on a table. Frames of all different sizes are piled on the floor against the walls. An easel, surrounded by paints and brushes, waits by a window.

All of the natural light flooding in through the Florida room makes for an ideal art studio. But it’s not necessarily the perfect setting for Lynn to actually paint.

“I’m up by 4am,” she explains. “I prefer artificial light because that’s how the painting will be seen in a home or in a gallery. And when I’m really into a painting — when it’s just falling off the brush onto the canvas — I’ll paint nearly non-stop right into nighttime for days until it’s done.”

The initial, just-getting-the-canvas-covered phase generally takes Lynn two to three days. Then comes about three weeks of perfecting what will be the final work of art.

Lynn considers her particular use of light and shadow to be her trademark.

“You have to have the light to start with,” she insists. “It’s the basis of every painting. From the light comes the shadows of the paintings, and this is where the story of the painting comes to life.”

And for Lynn, every painting has to tell a story. This is where her inherited artistic talent and her lifelong association with the horse meld into one. The story is in the detail and attitude of the painting, in the simplest cock of a horse’s ear or the look in its eye. There are no people in Lynn’s portraits, just horses in the starring role, with sometimes a cat, a dog, or a bird as a supporting character. But the story is there. “When I see the emotional response people have to a painting, I know I’ve accomplished what I wanted. They’ve connected to the story I’m trying to tell.”