Ah, dogs. One of the earliest domesticated animals, dogs have been mankind’s most enduring companions. Dogs are such a predominant pet that the American Kennel Club recognizes not only more than 150 different breeds, but several different classifications among the breeds including terriers, toys, working, herding, sporting, non-sporting, and hounds.

And then, of course, there’s the ever-lovable mutt. Of mixed and oftentimes unknown parentage, mutts and kids just seem to go together like an afternoon rain shower and a summer day.

Then there are those very special dogs that go beyond being just wonderful pets, heeding a higher calling as service dogs. They are selectively bred and raised, then go through years of specialized training to assist people with special needs. Therapy dogs are individuals’ well-trained pets that have a deep affinity for people, visiting hospitals, nursing homes, and rehab centers to brighten someone’s day with their very presence.

Ocala Style recently visited with several local special dogs and the people whose lives they have enriched.

Georges Doura and his service dog, Robert, are inseparable.

Georges and Robert. Robert and Georges. Where there’s one, there’s the other. For almost six years now, the duo has been an inseparable team. It’s a partnership built on necessity and training, but most importantly on trust. That’s the true bond between Georges Doura, who is blind, and Robert, his 90-pound black Labrador/golden retriever cross guide dog.

“You have to trust your guide dog,” says Georges, 58, who lost his eyesight at 20 after contracting bacterial meningitis. “I knew a man who had a German shepherd guide dog, but he thought he knew better than the dog did. One day he was walking in the city and the dog stopped, but the man ignored him and kept walking—right into a construction site—and was almost killed.”

Georges and his wife, Marie, moved to Ocala in 1987 where he soon established a massage therapy clinic. Once again health problems—this time congestive heart disease—struck Georges and he was forced to close his business in 1999.

A friend insisted he get a service dog.

“I had always done fine getting around with a cane,” he recalls, “but I put my name on the list and waited.”

One catch. Georges would have to live at the guide dog school for a month to train with the prospective dog and ensure they were a good match.

“Robert and I got along right away,” says Georges, who always smiles when he talks about his dog. “The trainers at the school said we even walked alike.”

Since their first meeting, Georges and Robert have been a team. When Robert isn’t in harness, guiding Georges around Ocala, he’s curled up at Georges’ feet. Robert has flown many times with Georges to New York, and when Georges has to spend time in the hospital because of his heart problems, Robert’s at his bedside.

As often is the case when owners and their dogs begin to look alike, Georges’ black hair is gray-streaked and Robert’s black muzzle is sprinkled with gray.

Like most 5-year-old boys, Angel Duarte is all about energy. Long-limbed with a mop of curly brown hair, he climbs up on his mother’s lap and almost immediately jumps down. He sprints into the kitchen, back in seconds clutching a bottle of liquid yogurt as he clambers up again onto Janet’s lap. He is impatient for her to peel off the lid, squirming until she does. He throws his head back as he pours the yogurt into his mouth. It comes out too fast and some dribbles down his chin onto his dark green shirt.

Angel is upset, vigorously shaking his head side to side. Janet quietly reassures him that everything’s okay as she wipes the yogurt off his shirt, then hugs him. He does settle down, but only for a moment before he wriggles free and is off again.

“A year ago, he wouldn’t let me hug him at all,” says Janet. “He wouldn’t acknowledge me for a long time or even make eye contact.”

Janet and her husband, Osniel, have two older children, Samantha, 8, and Antonio, 6. Soon after Angel was born, they knew something was different with their third child. At 18 months, Angel was diagnosed with high-functioning autism, a neurological disorder that typically appears in the first three years of a child’s life.

Autistic children have difficulties with social interaction, verbal and nonverbal communication, and repetitive behaviors or narrow, obsessive interests. Conventional treatments for autism include medication and educational/behavioral intervention. Additional alternative treatments include animal therapy, which is how Hunter, a 110-pound golden retriever, became part of the Duarte family.

“I read an article in Ocala Style almost two years ago about Julie Drexel, a puppy raiser and trainer for New Horizons Service Dogs,” says Janet, a cardiovascular technologist at Central Florida Heart Center. “In the article, she mentioned that the service dogs could be trained for autistic children. Angel was three at the time and becoming very active. We had to keep him in a stroller whenever we went out in public because he would just take off. I didn’t want to keep him in a stroller as he got older and thought maybe getting a dog would be an alternative.”

Four months after contacting New Horizons Service Dogs, which is located in Orange City but places dogs throughout the country, Janet got a call. Six weeks later, Hunter arrived.

When out in public places, Angel wears a lightweight nylon harness and Hunter is attached to his waist by a leash. Janet has a separate leash that she clips onto the dog’s collar. Hunter responds only to Janet’s commands, not Angel’s.

The only difficulty the Duartes have experienced is sometimes being denied access to public places with Hunter initially because people don’t believe he is indeed a service dog, despite the vest he wears in public.

“People are used to guide dogs for the blind and people in wheelchairs,” says Osniel, who is a local real estate professional. “But they see a child with a dog and they think it’s just a pet. We have to explain to them that Angel is autistic and Hunter is his service dog.”

Hunter, who is 4 years old, is a quiet dog, bred and trained to be that way. His demeanor has a calming effect on Angel. There’s also this: When Angel is attached to Hunter and he tries to run off, the dog has been trained to sit and becomes a 110-pound anchor. Janet can be sure that Angel isn’t going anywhere.

Initially cool to Hunter, Angel now understands that he’s his special dog. Hunter goes everywhere with him except to school and sleeps at the foot of Angel’s bed.

“It gives us great peace of mind that Angel has Hunter,” says Janet. “We’ve seen a lot of progress.” 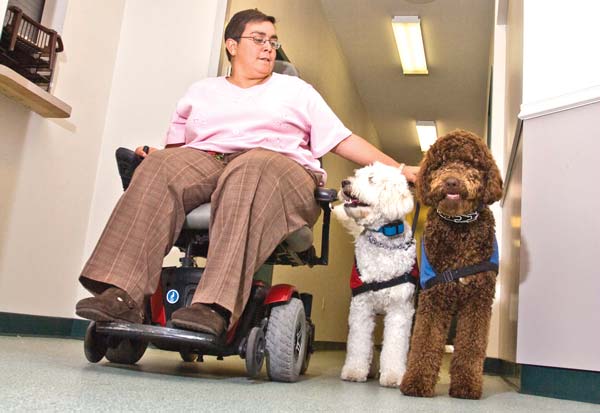 For Alma Rosario, her labradoodle service dogs Mustang and Princess are the calm amid the storm of lupus. An autoimmune disease, lupus is often described as a misdirected attack by the body on itself. Lupus’ grocery list-long symptoms include debilitating fatigue and arthritis. At its worst, the disease destroys organ tissues in the lungs, spleen, kidneys, heart, and brain.

Alma has battled lupus since she was diagnosed in 1990. At the time, she was a nun doing missionary work with orphaned children in Colombia, South America. Currently, she is a client assess evaluator for Ocala-based The Centers, sharing her small office with Mustang and Princess.

“I was having a lot of trouble with dizziness when I would get up from my wheelchair or switch to my walker or cane,” explains Alma. “I was doing some research on the Internet and came across information on service dogs. That’s when I got the idea to get the dogs. I thought maybe they could be trained to help steady me.”

Alma contacted Elite K9 Academy in Jupiter, who agreed to train the dogs for her. She decided on labradoodles because of their easy-going nature, size, and hypoallergenic coats. Princess and Mustang are half-siblings, and both are just shy of one year in age.

Sitting behind her desk in her motorized wheelchair, Alma is flanked by Princess in the right corner and Mustang in the left. Each dog has a comfortable pet bed and a variety of toys. Both wear service dog vests, red for Princess and blue for Mustang. Stitched on one side of the vests is the admonition, “Please Do Not Feed The Service Dog.” A sign with the same message hangs on Alma’s office door.

“When they’re here with me, they’re working,” says Alma, 47, who was born in Puerto Rico, raised in New York, and lived in New Jersey before moving to Ocala in 2002. “Everyone is amazed at how well- behaved they are. No one is even aware there are dogs in the building until they see me going through the halls with them.”

When Alma uses her wheelchair, the leashed dogs walk in tandem on her left side since the chair’s control panel is on the right. They have been trained to stay at Alma’s side when she leaves her wheelchair, coming to her aid if necessary. Their training will continue depending on Alma’s needs. For instance, they could be taught how to open doors and drawers, or pick up objects that lupus-induced arthritis may make difficult.

“The dogs are such a calming presence. I don’t worry as much about falling and other things that lupus makes you worry about,” says Alma. “Princess and Mustang have made a huge difference in my life.”