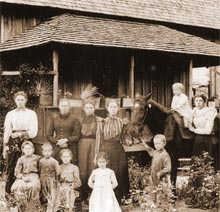 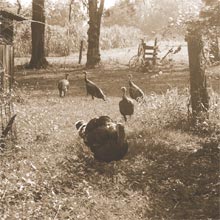 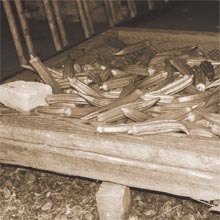 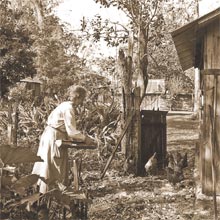 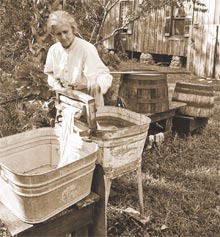 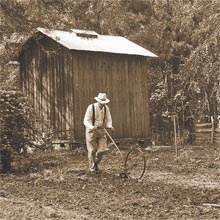 Dappled in morning sunlight streaming through the trees, two hard-packed dirt roads intersect. The road heading east was once the only road into Gainesville, many decades before Highway 26, or Newberry Road, came to be. The track to the south leads to the towns of Jonesville and Archer. These two narrow Alachua County roads look much as they did 150 years ago, when horses, mules, and foot travel were the main methods of transportation.

Near the crossroads, a weathered gray mailbox still bears the name Myrtle Dudley, silent testimony to the last daughter of the Dudley family whose homestead stands just beyond the split rail fence a stone’s throw from the roads. Today, the generosity of the Dudleys and the efforts of the Florida Park Service have made it possible to literally turn back the pages of history and visit an early Florida working farm.

In 1859, Captain Phillip Benjamin Harvey Dudley, (PBH Sr.) purchased with a land grant the first 300 acres of what would grow to be a 640-acre farm in Alachua County, and moved his family from Charleston, South Carolina. Dudley’s son, (PBH Jr.) went on to develop the farm and by the 1880s, the Dudley name was a prominent one in the area. The farm became an important landmark and neighbors relied on the Dudleys’ general store, which sat at the crossroads. Thanks to the store, post office, syrup making complex and the cattle dipping vat, (used to rid cattle of ticks), the Dudley homestead established itself as a true center of the community.

Over the years, three generations of the Dudley family lived and worked the land as their successful cattle, crop, and vegetable farm evolved through the decades. The year 1930 saw the arrival of electricity and the first tractor was put into use on the farm. Indoor plumbing wasn’t added until 1950; until then the three-seater outhouse, (complete with corn cobs and Sears & Roebuck catalogs), served that purpose.

The family of PBH Dudley Jr. had 12 children — four boys and eight girls. Of these, Myrtle Dudley was the youngest daughter and the last of the third generation. Respecting her mother’s wishes that the family farm be preserved forever, Miss Myrtle, who never married, donated the land to the Florida Park Service in 1983. Restoration of the property’s 18 historic structures began the following year.

Reading about history is one thing. Exploring it in person is something else altogether. Firsthand experience is what Dudley Farm is all about. From the all-original furniture in each room of the house to the pile of homespun laundry waiting to be twisted through the wringer washer, everywhere you look there is evidence of life the way it was when the farm was a working operation.

The beauty of the park is that this is still a working farm. Sugar cane, field corn, and sweet potatoes are cultivated using mules and by hand. The annual sugar cane harvest and grinding takes place just as it did a century ago. Colorful Cracker cattle graze the pastures and horses are used to plow the fields.

“On Wednesdays, you may see quilting, rug braiding, basket making, or crafting with corn shucks,” adds Sally. “You can see the traditional crafts from Florida’s early days.”

Products from the farm, such as cane syrup, cornmeal, and grits, are sometimes available in the Visitor Center, depending on the season.

“In the past, a typical morning at Dudley farm would begin at sunrise,” Sally explains. “The cows would be milked and mules brought up to harness for working in the fields. In the kitchen, the women would be cooking the breakfast meal. Today, we carry on many of these same traditions, but we don’t cook on the wood-burning stove when the weather’s hot. We reserve that for cooler days and special events.”

Long before the days of air conditioning, the Dudley farmhouse was built to make the steamy summers tolerable.

“The breezeway provided ‘air conditioning’ by allowing breezes to blow through the center,” Sally notes. “The high ceilings allowed warm air to rise so the lower air would be cooler. The elevation of the house off the ground also allowed air to circulate underneath.”

Located in a separate building because of the heat of cooking and the danger of fire, the kitchen and dining room stand a few yards off the back porch. It’s just a short walk to the chicken houses, the turkey pen, the smoke house, and the combination dairy shed/canning house where the Dudley women made butter and cottage cheese, stored their canned produce, and tackled the endless task of laundry.

Out in the stable area and around the hay barn are stacked split rail fences, sometimes referred to as “snake fences” because of the way they were built in a slight zigzag fashion. In small enclosures where livestock could put pressure on the fencing, support posts were used on the inside and outside of the rails. But for large pastures, the rails were simply stacked in alternating fashion, and stayed in place because of their weight and the way they were stacked.

All of the farm buildings and fences are made of long-leaf yellow pine, a native Florida tree known for its long-lasting, hard wood. Unlike the pines grown in Florida today, the long leaf wasn’t ready for harvesting until it was 80 to 100 years old.

Near the heart of the farmstead sits the Syrup House Complex, the site of sugar cane syrup making, hog butchering, lard processing, and lye soap making. All of these tasks took place during the winter months.

“Myrtle said the cane syrup making began at Thanksgiving and continued until around Christmas. By that time, they had used up all the sugar cane they had to grind,” Sally relates. “They used the syrup for themselves and their hired help, and then sold the surplus. It was a working enterprise and good business. They also let the neighbors use their syrup complex since not everyone had a mill. The neighbors would bring their own horse or mule and sugar cane, and then use the Dudley’s kettles and mill to make their own syrup.”

The Dudley family maintained four to six acres of sugar cane. Considering all work was done by hand, harvesting the cane, which started in mid-November, was a time-consuming task.

“You can’t speed up the process if you want to get a good product,” explains Stephen McMenamin, who has worked at the farm for three years. (The simplicity of the farm has affected his own lifestyle — he owns no car, TV, nor computer and rides his bike to work.) He adds that an experienced syrup maker can tell when it’s cooked enough by the consistency of the syrup as it drips off the ladle.

When done, the syrup is poured into a trough that runs directly into the bottling shed next to the furnace. Here, women bottled the finished product once it had cooled slightly.

Terry Stidham is a park ranger, but her “uniform” is a cotton print housedress and white apron. In the eight years she’s worked at Dudley Historic Farm, Terry has devoted her efforts to managing the livestock. She also tends the flower garden in the front yard of the homestead and the 21 heirloom roses.

“They supported about 20 neighbors in the area with their general store,” notes Terry. “They were very self sufficient.”

Monthly trips into Gainesville for coffee and a few items that weren’t produced on the farm took care of their outside needs.

Terry is an ardent fan of the farm’s Cracker horses and cattle. The Cracker horses, descendents of the first horses brought to Florida by Spanish explorers in 1521, are hardy and well adapted to the unforgiving Florida climate. These tough little horses helped build the foundation of Florida’s first industry — cattle ranching. (Indeed, the first fight between cowboys and Indians took place not in the Wild West, but here in Florida in 1647.) Cracker Horses were excellent cow ponies and their unusual name is derived from the cracking of the whips their riders used to drive the cattle out of the thick underbrush.

Start your visit to Dudley Farm in the Visitor Center where you will learn a quick history of the property. As you make the short walk through the woods to the homestead, it’s as though an entire century has disappeared.

“The experience is like a walk back in time as you leave the busy highway and walk into the farmstead where time seems to have stood still,” says Sally. “You’re transported back into the late-1800s where you’ll learn about when people were self-sufficient and able to live off the land.”

One thing is certain. Spend some time at Dudley Farm and you’re sure to come away with a renewed appreciation for the amenities we often take for granted.

And have an increased respect for the early settlers of this land we call home.

Hours: 9am to 4 pm, Wednesday-Sunday

School classes and groups of more than 10 must make reservations one month in advance for guided tours. Book early — dates fill quickly!