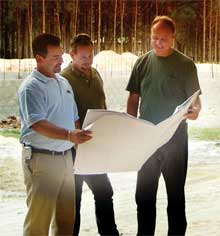 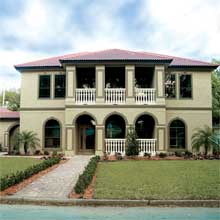 Most of these tales of woe are directly related to the fact that the home owner doesn’t control the building process. But with UBuildIt, all of that changes. If you like the idea of saving money and being in control, UBuildIt is the only way to go when you’re ready to build your next home.

With 117 offices in 31 states, UBuildIt has assisted thousands of families and individuals over the past 19 years. Instead of relying on a builder, you’re in control of your own project and know exactly what is happening at every stage. Your Construction Consultant from the UBuildIt team is there to walk you step-by-step through any type of residential construction.

“We currently have about 150 projects under construction coast to coast in central Florida, and another 100 in the planning stages,” says Monty Anderson, owner of three UBuildIt franchises conveniently located in the Central Florida area.

Most UBuildIt clients have no prior construction experience, but enjoy the peace of mind of having professionals on their team who help them avoid expensive mistakes, something you don’t have as an owner/builder going it alone. You also get the benefit of a network of reliable subcontractors and excellent discounts from national vendors in the construction industry.

“On average, our clients are saving 24 to 26 percent overall, and even up to 30 percent,” notes Monty. “You pay your own bills directly so you know they’re paid on time and that there’s no mark-up on materials. All it takes is about one and a half to two hours a day to be ‘on the job’ and most of this is just phone calls.”

The freedom and control of handling the construction directly convinced Rick and Cyndi Schooler to go with UBuildIt when it was time to build their dream home.

Having built four previous homes in four different states, the Schoolers were no strangers to the construction process, but working with UBuildIt was a new and exciting concept.

“In the past, we either used a custom builder or we job-shared and had a project manager,” explains Cyndi. “This was the first time we decided to completely take on the project ourselves. We had talked to a builder and knew what those prices would be, and then we talked with UBuildIt.”

Now in the final building phase, Rick, Cyndi, and their three children are about to move into their new 4,400 square foot home barely six months after actual construction began. With Rick working full time, Cyndi was the one who oversaw planning and construction and worked with the subcontractors so that the building process could be completed in a relatively short time.

“Working with UBuildIt has been a very positive experience,” says Cyndi. “The main reasons I would recommend them are cost savings, the reputation of their subcontractors, and the expertise of their consultants. We’ll probably never go back to using a builder again. We’ve saved about 25 percent overall.”

The Schoolers have been especially happy with the control they’ve had over the entire process.

“You’re not held hostage by a builder’s timeline,” Cyndi explains.

“You really do control the time. In the past when we’ve used builders, we had to rely on them to make calls and get things done.

“They clearly explained things upfront so we knew what our responsibilities would be and the amount of time required. I really liked their honesty and direct attitude,” adds Cyndi. “They make sure the homebuilder is committed to the building process. They know the industry and really do a good job of helping you all the way through the process. They take you from start to finish and want to make sure you’re happy with your home at the very end. If you run into any problems, their consultants are always available to help you solve them.”

Cyndi adds that taking out the middle man saved her family 25 percent. “If you use a builder, they charge you if you change things, plus all the features we’re getting would have been marked up by a builder,” she says. “With UBuildIt, we’re just paying materials and labor costs. There’s no mark-up. I know exactly what we’re paying and we can control what we get with a subcontractor.”

The Schoolers quickly discovered that the tremendous resource of qualified and screened subcontractors was another big bonus of going with UBuildIt.

“You can use anyone you want, but UBuildIt allows you to use their list of recommended subs,” notes Cyndi. “This was a huge thing because it took the worry out of wondering if you’re getting a reliable subcontractor. UBuildIt helped us save money, but they were also a stepping stone to finding reliable subs for each step of the process.”

“Not every homeowner wants the responsibility of being so involved throughout the building process. But for those who do, UBuildIt is a win-win choice,” says Cyndi.

When Richard and Debbie Stuart moved to Marion County last year, they had already heard about UBuildIt from friends when they lived in Fort Lauderdale. The Stuarts decided to go with UBuildIt instead of a general contractor and plan to move into their new home by the end of 2007.

Determined to build a home that was both hurricane safe and had a high insulation value, the Stuarts wanted to use ICF (insulated concrete form) construction. When Richard talked with builders, however, he found that they weren’t interested in using ICF. “They also didn’t seem like they wanted me to be as hands-on as I planned,” he adds.

Going with ICF construction is already proving to be a wise move. “Between the ICF walls, double windows, and the spray insulation foam we’re using, we were able to lower our air conditioning unit size from seven tons to just under four tons for a home that is 3,000 square feet under air,” notes Richard.

In addition to using the construction process they wanted, the Stuarts have found that working with UBuildIt has plenty of other advantages.

“Their consultants are very accessible if you have a problem and have been available whenever we need them,” says Richard. “UBuildIt has supplied us with a list of subcontractors and they make sure they’re licensed and insured. If necessary, they will also handle the bid, so that’s a positive.”

Starting off on the right foot is crucial. He adds, “I can’t emphasize enough how important it is that your building plans are exactly what you want before you get started because making changes later is costly. Be sure you’re happy with the plans before any construction starts because that’s what the subs will follow.

“UBuildIt has the expertise to guide you, but you still need to be informed and involved,” Richard points out. “You need to visit the site regularly to make sure things are being done the right way. It’s your home and your money; you can’t just turn it over to someone else. We’ve also saved money by using UBuildIt. You pay them a set price so you’re not getting hit with extra costs all the time. We’ve been very happy with them and are glad we decided to build this way.”