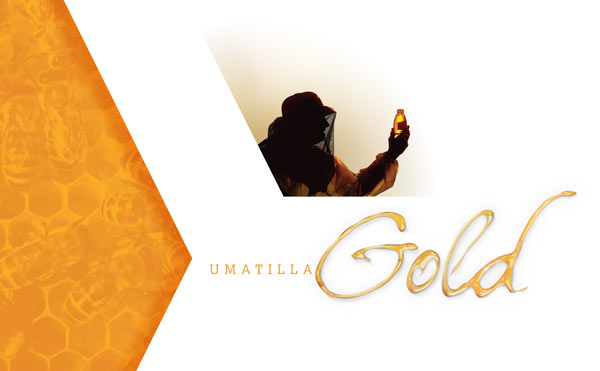 If honeybees could acquire frequent flier miles, then Bill Rhodes’ bees would be medallion-level travelers. They spend their summers pollinating clover and alfalfa fields in South Dakota and their winters in Florida’s Everglades making Brazilian Pepper honey. In the late spring, they’ll be shipped to south Georgia and northeast Florida around Yulee and Jacksonville to produce the artisan Gallberry honey. Then there are trips to Lake Placid and Indiantown in South Florida for the state’s signature Orange Blossom honey.

And, of course, they return to Umatilla in between all those pollinating trips where they are fed and maintained as well as bred for more hives.

Bill is one of Florida’s leading honey producers and the owner of Bill Rhodes Honey Company. The Umatilla business began as a one-man operation in the early 1970s after Bill returned home following a two-year career in the Canadian Football League.

“I got interested in the bee business through a friend,” says the former Florida State University lineman. “I started with 50 hives and before I knew it I had 400.”

Today, he has anywhere between 8,000 and 10,000 hives and 15 employees. He has a plant in South Dakota as well as a farm in Georgia where he “runs” the bees. He also pays “bee rent” to farmers who want their crops pollinated. His company produces 1,500 to 2,500 drums of honey annually, but those numbers can fluctuate wildly from year to year because of weather and a variety of other factors. 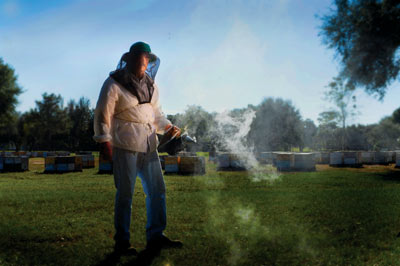 The unknown factors are what cause Bill and beekeepers like him to lose sleep at night. Honeybees are disappearing in record numbers. The Apiary Inspectors of America and the federal government’s Agricultural Research Service (ARS) estimate that the U.S. lost a third of its honeybee colonies last winter, mostly because of a phenomenon called Colony Collapse Disorder (CCD), which causes worker bees to just leave the hives. Scientists believe that pesticides on crops play a significant role in causing the bees to become disoriented or impaired so that they never return to their hives.

“A cold winter or too much rain hurts you,” explains Bill, “but Colony Collapse Disorder will kill you.”

“People don’t realize that a third of everything they eat is pollinated by bees and the collapse of the honeybee population is a major threat to crops,” says Bill. “Even scarier is that the same pesticides hurting the bees are on everything you and I eat, too.” 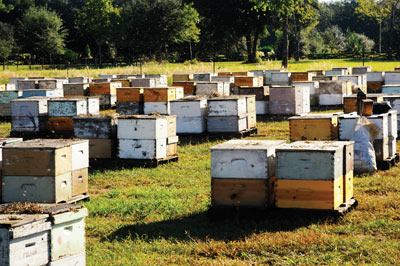 Flowering plants require insects for pollination, and the honeybee is by far the most effective. They pollinate most fruits, nuts and vegetables, including apples, oranges, strawberries, onions and carrots. Even coffee, soy beans, clovers—like alfalfa, which is used for cattle feed—and cotton are all dependent on honeybee pollination.

Systemic pesticides that move throughout a plant, even down to its roots, are highly toxic to bees. And it’s this assault on bees that is causing catastrophic losses for some honey producers. Many have left the industry altogether, but more and more are choosing to blend their local products with inferior foreign honeys or syrups and make what the honey industry calls “funny honey.”

Adulterated honey scares Bill more than bee stings. He says that much of the honey from Malaysia, Indonesia and especially China contains carcinogens and antibiotics.

“Importers are recruiting local packers and producers to jar foreign honey under local labels,” Bill says. “They can sell it for 80 cents a pound, whereas pure local honey goes for $1.60 a pound.” 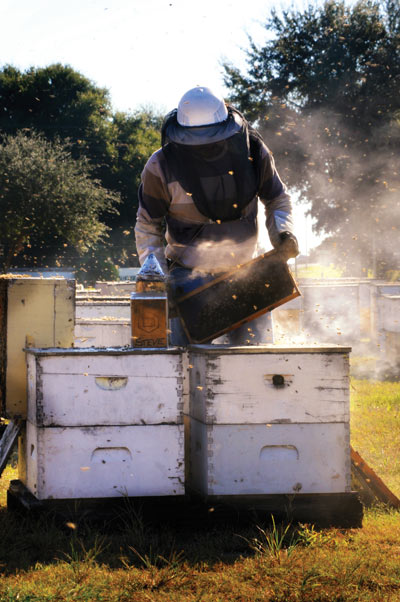 Estimates of America’s honey consumption range vastly, from 350 to 450 million pounds of honey per year, according to Bill. The National Honey Board estimates that less than 150 million pounds are produced in the U.S. Bill says the market is ripe for importers and producers who are looking for ways to cut pure honey with additives that are far less expensive to produce.

“Bill was instrumental in helping Florida become the first state in the nation in 2009 to set industry standards,” says Doug McGinnis, co-owner of Tropical Blossom Honey Co. in Edgewater. “He is passionate about making sure honey is pure, and we need more beekeepers like him.”

Florida’s Standard of Identity for honey defines what honey must be in order to be sold in Florida. California, Wisconsin and North Carolina have since followed suit with their own standards, and similar efforts have been proposed in at least 12 other states, including North and South Dakota, the nation’s largest producers of honey. The U.S. Food and Drug Administration is currently reviewing a petition seeking a national honey standard, something that Florida’s honey producers say is long overdue.

When Bill isn’t writing letters or making phone calls about funny honey or harmful pesticides, he’s busy making the golden nectar of the gods. And, indeed, his locally produced Gallberry and Orange Blossom honeys are a taste of heaven. His clover, alfalfa and Brazilian pepper flavors are tasty, too.

“Although Bill is a large producer, he pays attention to the little details that go into producing honey,” says Doug, who has sold Rhodes Honey at Tropical Blossom for more than 20 years. “He knows what he’s doing, and he always brings us a superior product because he puts so much care into his hives.

“When we get calls from people in your area looking for pure honey, we send them to Bill,” Doug continues. “The surest way to get the best honey is to know your source and buy local.” 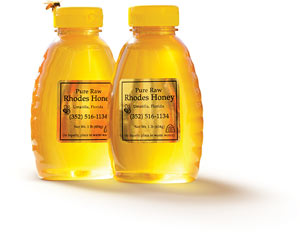 Bill’s process of honey production begins with healthy bees in hives that aren’t overcrowded. The white “super” boxes that cover the hives have room for 10 frames, but Bill uses only nine so that the bees have more room. When the honeycombs on the frames are full, they are removed and taken to the “honey barn” for processing. Each “super” holds 40 to 50 pounds of honey. Next, the honey is slightly warmed, just enough to separate the honey from the wax. Raw honey, Bill explains, is one of the purest foods on the table so it’s never overcooked. He also uses a centrifuge to further separate the wax and honey. The wax is then placed in molds that form 40-pound “cakes”—a by-product that has its own market among candle makers and cosmetic manufacturers—and the honey is barreled.

When Bill has a bit of downtime from producing honey, the Umatilla native enjoys spending time with his wife, Anna, and their grandchildren. Their son Billy manages the family’s farm in Quincy, Florida, and their other son, Bobby, is a local contractor and proprietor of a solar energy company. When the family isn’t discussing business, they are talking football—both sons followed in their father’s footsteps as FSU players in the late ‘90s.

When folks turn into the long driveway leading to Bill’s honey farm on CR 450A, they’ll find a place where the honor system still exists. Jars and gallon jugs of his raw pure honey are set in a glass cabinet near his office door. An honor box hangs near the door, and Bill says he’s never had a jar stolen.

“Most of the folks around here know me and just come on up to get their honey,” he says with a big smile.

More than 300 unique types of honey are available in the U.S. When a honey label denotes a varietal source—for example, orange blossom—that is the predominant nectar from which the honey is derived. The honey may not be 100 percent orange blossom, though, because bees can fly two to three miles and visit several different nectar sources. Here are just a few of the flavors bees produce:

ALFALFA  Alfalfa honey, produced extensively throughout Canada and the United States from the purple blossoms, is light in color with a mild flavor and aroma.

CLOVER  Clover honey has a pleasing, mild taste. Clovers contribute more to honey production in the United States than any other group of plants. Red clover, Alsike clover and the white and yellow sweet clovers are most important for honey production. Depending on the location and type of source clover, clover honey varies in color from water white to light amber. It accounts for 45 percent of supermarket honey.

GALLBERRY  Gallberry honey has a rich, elegant taste and is considered a perfect table honey because of its thick, aromatic flavor. It is also prized for its honeycomb. Gallberry is produced from a small evergreen holly (also known as inkberry) that grows along the South Atlantic and Gulf Coast and blossoms in late spring.

ORANGE BLOSSOM Orange blossom honey, often a combination of citrus sources, is usually white or extremely light and mild in flavor with a fresh scent and light citrus taste. Orange blossom honey is produced in Florida, Southern California and parts of Texas.

TUPELO  Tupelo honey is a premium honey produced in northwest Florida. Usually light golden amber with a greenish cast, Tupelo has a mild, distinctive taste. Because of the high fructose content in Tupelo honey, it granulates very slowly.

Bees can be scary or funny or mysterious, depending on how Hollywood portrays them. Have some honey with that popcorn and enjoy these captivating bee-movies:

Killer Bees (1974). Kate Jackson, Edward Albert and Gloria Swanson star in this horror movie about a strong-willed woman who not only dominates her California winegrowing family, but also has a strange hold on a bee colony in her vineyard.

Bee Movie (2007). Jerry Seinfield created and starred in this animated comedy that supposedly will change the way you think about bees. Renee Zellweger is the florist who changes the way Jerry’s bee thinks about humans.

The Secret Life of Bees (2008). Set in South Carolina during the 1960s, this tear-jerker tells the story of a 14-year-old girl, played by Dakota Fanning, who goes to live with a family of beekeepers. Queen Latifah and Jennifer Hudson give memorable performances.

Nicotine Bees (2010). If you are not convinced about the importance of honeybees for food crops, you may want to check out this critically acclaimed documentary by Kevin Hansen. Beekeepers explain why the industry is in big trouble.