The image of a biker has definitely shifted gears. Bikers were once considered the bad boys of the road. Films that personified the wild life such as Easy Rider and Chrome and Hot Leather have been replaced by the tamer images of John Travolta and Tim Allen in the recently released Wild Hogs.

Meet seven successful people who are contributing to that new image for motorcycle enthusiasts. Judges, educators, a chiropractor, and a minister share their stories—and their love of the open highway.

In the words of the old Steppenwolf song, “Get your motor running and head out on the highway” with Lake and Sumter counties’ most unlikely bikers.

This Oxford native is a sixth generation Florida native who continues the family tradition of making a living off the land. He also rides across it. A rebellious streak is the reason.

“My father wouldn’t let us have motorcycles,” Rodney explains. “I was always fascinated by them.”

He often leaves Oxford to visit a vacation home in Otto, North Carolina.

He doesn’t always travel those mountain miles alone. He enjoys riding with his wife, Lynn.

“When you raise kids most of your life,” he says with a smile, “it’s nice for her to get on the back of the bike and ride with me.”

Ask him if he treks the treacherous “Tail of the Dragon,” and he confirms that he does. The North Carolina road has 318 switchback curves on an 11-mile stretch of U.S. Highway 129.

Back in the gently rolling hills of Oxford, Rodney says he “piddles at several things.” But for recreation, he rides.

“I took a class about a year after I got my Harley. It rained the whole day,” he remembers. “I learned a motorcycle will do more than you think on a wet road. A good friend of mine told me [that] no matter how long you ride, you can always learn something.”

Small of stature, but big on adventure this 5-foot 2-inch, 110-pound college dean decided a few thousand miles ago to buy her Yamaha V-Star 650.

“The bike has a low center of gravity and it’s easy to maneuver,” Mary Jo explains. “Since I’m a new rider, I also took a class which makes me a better car driver, too.”

As an educator, Mary Jo teaches classes in word processing and basic computer skills for college writing. As a dean, she oversees all of the career and technical programs at LSCC and works directly with faculty members. She balances this cerebral indoor activity by biking in the great outdoors.

“When the semesters are over, the students celebrate in their way. I do it on my bike,” Mary Jo describes. “I enjoy nature, the scenery, and going through little towns and meeting new people. It’s a great way to get to see America.”

A Leesburg Bikefest visitor can get thirsty. Rich Haines, wife Melody, and others from the Oxford Chapter of Wheels of Faith Ministry can quench it with bottles of “Living Water.” They hand it out, gratis, as a ministry outreach.

“All people are looking for acceptance,” Rich witnesses. “Wheels of Faith is a national ministry that reaches out to people of all faiths as well as to bikers and non-bikers.”

At the Sturgis Motorcycle Rally in South Dakota, one of the oldest and largest motorcycle events in the country, Rich and his group set up a water booth and handed out bracelets.

“We take it very seriously and prayerfully,” he explains. “You have to meet a lot of criteria to wear a Wheels of Faith patch. There’s a lot of accountability.”

Wheels of Faith is also known for its annual Toy Run at Christmas in many areas, including Lake County. The group reaches out to people who may not be going to church, including hardcore bikers.

“If you ride with people and build a relationship with them,” says Rich, a father of three, “they’ll know they’re accepted and may go to church with you.”

When he takes off his leather, Rich puts on a suit to sing gospel music with the duo His Purpose and with the quartet Reverence.

Whether on wheels or at the altar, Rich does what he loves with compassion and commitment.

I was always a two-wheeler,” Cliff says between chiropractic appointments. “I was a bicycle messenger in Manhattan.”

If being a bicycle messenger in New York doesn’t sound exciting enough, this chiropractor is also a musician in three groups. In the Dora Music Project, he plays jazz standards. The Sky Earth Orchestra explores the genre of world music, and The Lost Cats is a classic rock band.

His bike choice is also a classic. The Honda Valkyrie is a discontinued, rare find and has great sentimental value.

“I chose it because a close friend of mine, Dr. Bob Upton, was diagnosed with leukemia and passed away. The bike was his,” Cliff reminisces. “I ride with an angel.”

He also rides with a purpose.

“It’s a more involved mode of transportation,” Cliff says. “You’re outside, you lean and turn with the bike, and it’s a great way to travel.”

He also has a serious side to why he bikes.

“To me, biking is one of the best things we can do to support our troops serving in the Middle East,” he explains. “It comparatively saves gasoline. It may sound like a drop in the bucket, but it’s an important vote we can make.”

Kathy is a grandmother who won’t take a back seat to anyone for long.

“I used to ride on the back of my husband John’s bike,” Kathy says. “But I wanted a bike of my own.”

She passes on the three lessons from a motorcycle class to anyone considering biking.

“First, you have to want to do it,” Kathy advises, “second is motorcycle safety. I would never have tried it unless I took a class. Third, you have to buy the right bike.”

Kathy has clocked more than 12,000 miles, locally and long distance, on her V-Star. Adventures have included rides to Texas, New Mexico, and the Grand Canyon.“I love being on the back roads,” Kathy says. “On my one-year anniversary of buying my bike, we rode to Key West. When you’re in the mountains, there are few guard rails. It’s different for Florida flatlanders!”

Back home, her students have paid attention to more than the computer preparatory classes she teaches.

“I wear gloves with open knuckles. Some students have noticed the sunburned circles,” Kathy says chuckling. “I enjoy being outside. Biking keeps me young.”

It is said that the wheels of justice grind slowly. That is not the case with the wheels under T. Michael Johnson’s luxurious Ultra Classic. However, it did take time for him to take to the road.

“I regret not having done this 25 years ago,” Johnson shares. “About four years ago, I took a motorcycle class, got my Harley, and started going down the road with friends.”

“It was awesome being outside. I loved the wind hitting me,” Michael recalls. “Last year, we went to Napa Valley, Lake Tahoe, and up the Pacific Coast Highway.”

This year’s plans include a trip to the Four Corners region of New Mexico, which serves as a backdrop for some locations in Wild Hogs. In that movie, four mid-life friends take a road trip and some have to get past their wives to get on their bikes. That was not the case with Michael’s wife, Michelle Morley, also a Fifth Circuit judge.

“Normally you would have trouble convincing your wife about riding motorcycles,” Johnson explains. “But my wife has horses. I don’t have to feed my motorcycle and I have yet to be kicked or bitten.”

The verdict is he can ride and so can Michelle. One with a lot of horsepower and the other on horseback. With the case closed, it’s out on the open road. 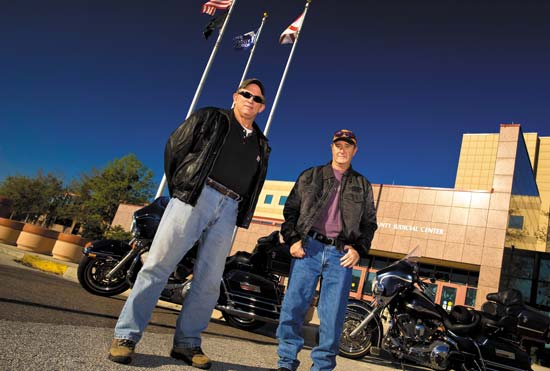 If you think biking is perilous, judge not lest you be judged. The Honorable Don Briggs will immediately admonish you to have positive perception. Cohorts beyond the courtroom, he and fellow judge T. Michael Johnson ride together. They also have corroborating stories about how they got started.

“It’s all Michael’s fault,” Don explains. “I rode horses with his wife, but then went biking with his brother. I fell in love with motorcycles. I started out with a Honda Gold Wing and then got a Harley.”

Traveling out West with Judge Johnson and other friends is a highlight, but Don also enjoys local scenery.

“The view from a bike is much better than in a car,” Don says. “My favorite places to ride around here are Umatilla and Altoona.”

He also enjoys the local Bikefest. Going to the huge Sturgis, S.D., bike rally or nearby Daytona, is not an aspiration.

“Leesburg Bikefest is as good as any of them anywhere.” Don confidently states, “I help out with concessions for the Leesburg Partnership.”

The judge encourages people to come to Bikefest and have an open mind about bikes and bikers.

“There’s not anything like riding a bike,” he says. “It’s an enjoyable experience. Once somebody does it, they can’t get enough.”

More than 150,000 people are expected to attend the three-day celebration that will feature music, food, exhibits, and vendors.