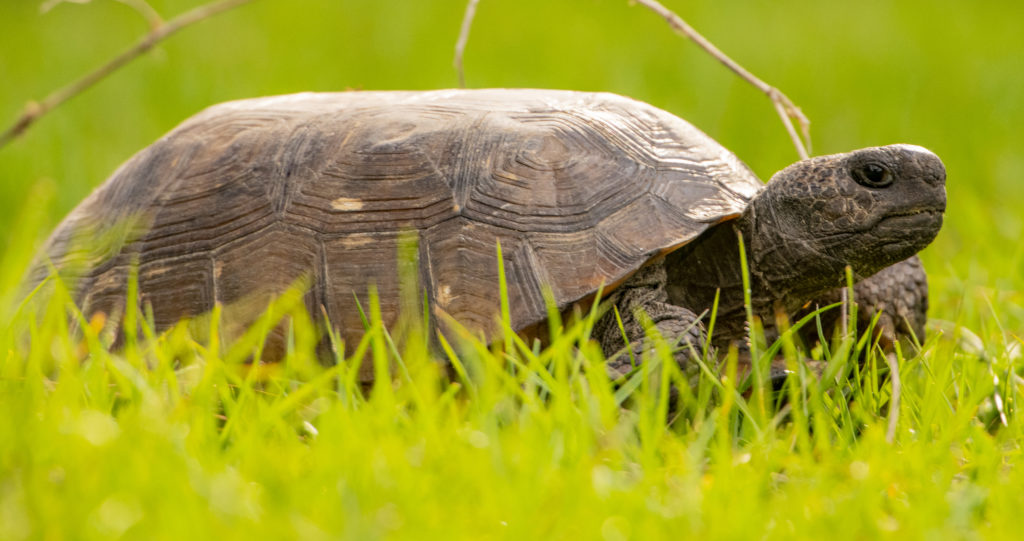 Silver Springs State Park consists of 5,000 acres that include a variety of upland and wetland habitats, one of the largest freshwater springs in the world and the Silver River Museum. The park also is home to some incredible animals, and some are native “Floridians,” such as the manatee, while others are newer arrivals imported from faraway lands, like the Rhesus macaque monkeys.

Spend any time quietly walking the park trails and you’ll likely be treated to wildlife sightings. A common critter that guests encounter is the seemingly mundane gopher tortoise. Old timers in north Florida refer to them simply as “gophers” and they are sometimes confused with turtles. Tortoises aren’t flashy by nature, but there’s much more to these unique animals than most folks realize.

For starters, they are the only land tortoise found east of the Mississippi River. They likely evolved about 60 million years ago (for comparison, scientists theorize that humans evolved about 250,000 years ago) and a healthy gopher can live some 80 years. While their longevity is impressive, it is their status as a “keystone” species that is most important. Keystone animals are those that benefit many other organisms (plants and animals) just by being around. By protecting keystone species, numerous other animals are protected by default.

The gopher tortoise helps its neighbors in several ways. They dig burrows (tunnels) as homes, where they take shelter from extreme heat, the rare cold snap and even forest fires. A lot of other animals either move in with them or escape fires in the burrow. Their “roommates” include a variety of snakes, mice, lizards, insects and frogs (there are about 350 species that take advantage of the underground shelter).

Gopher tortoises are vegetarians and help spread seeds as they roam the area where they live.

Gopher tortoises are slow movers and are very picky about where they live; two traits that have led many of them to an early demise. Being easy to catch put them on the menu of prehistoric Native Americans and pioneers alike, and they were referred to as “Hoover chickens” during the Great Depression (after President Herbert Hoover).

More recent development/destruction of great swaths of upland longleaf pine habitat in the Southeast also has thinned their numbers considerably. The lack of regular natural fires also has been bad for them as fire promotes pine habitats and generates new plant growth, which equals more food for gopher tortoises.

These slow but important reptiles are considered threatened by the state of Florida and are protected by law.

So, as more and more of Florida is developed to suit our needs, let us remember the humble gopher tortoise as an example: They look out for the other animals in their neighborhood and go about their business in a slow and steady manner, traits I think we as humans should try to acquire.