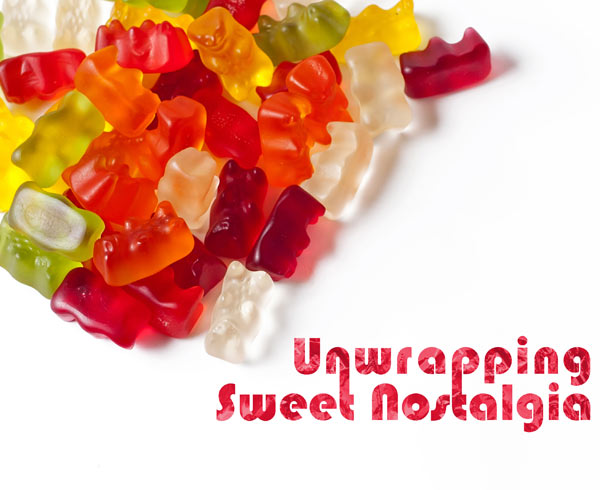 Padding the sidewalks in worn penny loafers and knee socks that had fallen down to our ankles, my friends and I would walk to town after school on Fridays with a mission of utmost importance: to buy a bag of candy at the local candy store.

Entering the shop always had a euphoric effect. After a moment of mouth-hanging awe, we’d plunge our little hands into glass jars of Nik-L-Nips, scoop out delicate Satellite Wafers and mischievously pick up a pack of bubblegum cigarettes at checkout.

The odd crackling of Pop Rocks on my tongue, pinched cheeks when I sucked on a Warhead, contemplation on whether to eat the whole roll of Smarties or one at a time, these are the sensations and trivial decisions that left sour, tart and sweet imprints on my childhood.

To regain some semblance of these sweet memories, I spoke with those who work with candy, a select few whom I call “time keepers.”

As my candy expedition progressed, I found a mix of the old and new. While visiting an old-fashioned candy shop and finding a more modern means of attaining candy favorites, I picked up a few fun factoids along my way—while sucking on an Atomic Fireball, or two.

My first stop was Cracker Barrel, a favorite pit stop for hungry travelers and dish towel collectors alike. Its store devotes an entire corner to nostalgic treats with jars of Clark bars, stacks of Bosco chocolate and Chiclets, cubbies of Zotz and Bubble Tape, and so much more. Jennifer Basham, shift leader of the retail shop, couldn’t have said it any better: 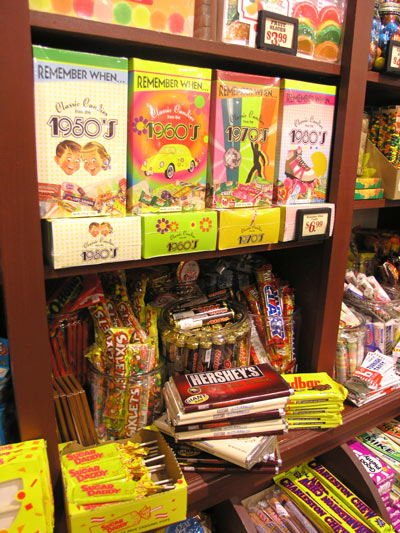 “You’ve come to the right place.”

The first Cracker Barrel Old Country Store opened in Lebanon, Tennessee, in 1969. From its opening, Cracker Barrel divided its space between its restaurant quarters and retail store. Lucky for us candy connoisseurs, the store’s candy corner is loaded with over 500 treats. Some of the candy is even exclusive to the store, such as Cracker Barrel’s very own Pecan Rolls, Fudge and Mints, and Remember When Candy boxes from the ‘50s, ‘60s, ‘70s and ‘80s.

Never one to go empty handed, I grabbed Chuckles and a couple Sky Bars—for research purposes only—as I made my way out.

Cracker Barrel is definitely the go-to destination for hard-to-find candy. Of course, my journey was just the beginning.

Whoopie! For a Retro Sweets

People often say whoopie pies are the first sight they see when they walk into Sweet Jane’s Candy. Maybe they had blinders on their eyes because the first thing I see is candy—baskets, counters, tables and shelves full of candy.

“When I was a little girl I was just fascinated in campgrounds and candy stores,” says Jane Waugh as she removes a fresh batch of cookies from the oven. They’re chocolate chip, and she lets me snag one as I ogle at the boxes of Push Pops and candy cigarettes. 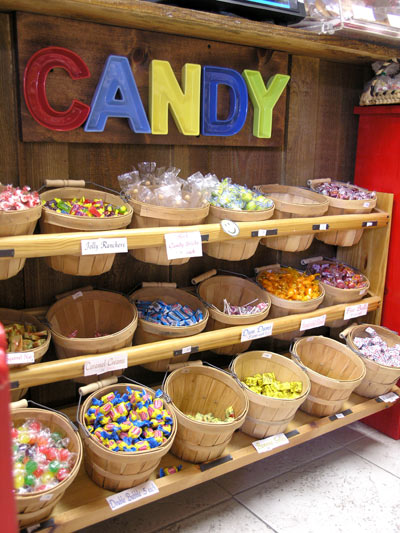 Located inside the Trading Post in the Wilderness RV Park Estates Campground in Silver Springs, Jane’s two loves were combined like Fizzies poured into water—an item she sells—when she opened in 2008. The Bar Harbor, Maine, native gets a small thrill when she sees a customer gasp and point while saying, “Remember this?”

However, there have been moments when Jane’s witnessed a less enthusiastic reaction. She recalls a couple with their two teenagers returning from a camping trip.

“The mother and father were so excited seeing the candy, but the two kids were like this,” she hunches her shoulders and bows down her head, texting an imaginary cell phone. “The kids were more excited about having phone service again than being in a candy store!” she says.

“This world has changed so much. It’s just a fast-paced world. When people come here, it’s their time to go back to their past. This is their moment in time, something people can’t take away. Life was so simple then.” Jane reminisces about walking to her town’s five-and-dime for candy when she was a child. “It had wooden floors that creaked. They still do.”

While most of her customers are adults, occasionally, a precocious 8 year old will come in and say, “Nana, I remember this from when I was a kid.”

Jane laughs, but both of us wonder what the future has in store for the, ahem, candy store. Supplied with a bag of loot—again, for research purposes, obviously—I pondered the future of candy as I left Sweet Jane’s and soon found my answer.

Jane is always on the lookout for requested candies. Here’s a quicklist of just some of her bountiful stock.

Started in 1998, CandyFavorites.com is the Internet’s oldest and largest online candy store. With a warehouse the size of a city block in McKeesport, Pennsylvania, the website carries over 2,800 products and ships worldwide.

Backed by McKeesport Candy Company, which was founded by Ernest Prince in 1927, I spoke with CandyFavorites president Jon H. Prince, a third generation candy man.

“One of the fun things about my job is that I get to sell candy that has considerably predated me,” says Jon.

On the site’s retro tab, customers can search for candy by the decade, starting before 1919 and onward to the 1970s.

“We wanted CandyFavorites to be kind of a community place, a place for candy lovers to reconnect with candy and connect with other candy lovers,” Jon says. “Anybody can sell candy. It doesn’t take a rocket scientist. It does take a great deal of commitment to make sure customers are happy.”

A confection of a site, CandyFavorites offers candy history and assorted nostalgia, from Whiz Bar ads to a Bonomo’s Turkish Taffy commercial. Facts and trivia are on each candy’s product page, and a list of discontinued candies—may they rest in peace—can be accessed on a sidebar.

“Quality has been associated with long lasting,” says Jon. “Charm Squares have been around forever. As a survival kit item in World War II, they have a place in American lore.”

Surrounded by candy every day, you’d think Jon would be sick of the sweet stuff.

“On the contrary,” he says. “I like Licorice Allsorts. Anything peanut butter and chocolate. Tootsie Pops…”

Web surfing CandyFavorites instilled me with a candy education. Here’s your own history lesson, candy quiz and health lecture. May I suggest a roll of Lifesavers? You’re going to need them.

Candy through the Ages

CandyFavorites compiled a timeline on candy’s milestones. Here are some highlights.

1930: Snickers, named after a family horse, is introduced.

1940: Hershey’s produces the D Bar, which is highly caloric and has a high melting point. Sealed in wax paper to make it resistant to poisonous gas, it was distributed as a survival ration for soldiers.

Test your candy knowledge to see if you’re a Smartie.

Answers at the bottom of the page.

How many licks does it take to get to the center of a Tootsie Pop?

What four flavors are in a NECCO Sky Bar?

“Even the name says fun” is what candy’s slogan?

What is the name of Bazooka bubblegum’s comic character?

The average American consumes how much candy per year?

What baseball player had a circular chocolate bar named after him in the late 70s?

In 1923, a plane was chartered to drop thousands of what candy bar over Pittsburgh?

You Can Have Your Candy And Eat It, Too

Tell well-intentioned friends to stop blaming the chocolate, and enjoy a Snickers as they chew on this.

Myth:Eating chocolate will give you acne.

Fact: The University of Pennsylvania performed a study that concluded chocolate doesn’t cause acne. Hormones, health conditions and genetics are contributing factors, while greasy and sugary foods are not. So if it makes you happy, go ahead and eat a chocolate bar—just don’t pop that pimple!

Fact: I promise you, swallowed gum takes but a few days to digest. While swallowing won’t cause the gum to become a part of your anatomy, it can be a choking hazard.

Fact: Any food containing carbohydrates—starches and sugars—can contribute to tooth decay; however, this is easily preventable through proper oral hygiene. Remember to brush after meals or at least twice a day.

Fact: I’m not saying go ahead and give your kids candy for breakfast and soda before bedtime, but studies conducted at Vanderbilt University and the University of Iowa College of Medicine found no evidence that sugar affects children’s behavior. In fact, some studies have shown that sugar boosts kids’ performance on tests and helps them stay on task. Try telling that to the school board.

Why stop at retro candy? These carbonated beverages are like bottles of prized perfume—only drinkable. Twist off a cap at Stella’s Modern Pantry in Ocala and you’ll slurp up a refreshing taste of nostalgia.

Cheerwine: Called the “Nectar of North Carolina,” this cherry pop was created in Salisbury in 1917.

Bubble Up:The lemon-lime beverage came out in 1919, with the tagline, “A Taste of Lemon, A Taste of Lime.”

Frostie Root Beer: Always a crowd pleaser, this fan favorite was created in 1939 in Catonsville, Maryland.

Ale-8-One:Bottled in Winchester in 1926, it is the only soft drink invented in Kentucky still in existence.

Lemmy Lemonade:Introduced in 1939, the soda was produced by the A.J. Lehman Company.

Nesbitt’s Strawberry Soda: Marilyn Monroe was a 1946 poster girl for the orange flavor. The Nesbitt’s Fruit Products Company opened in 1924.

Nehi: Radar from M*A*S*H was often seen drinking the grape flavor. The line of sodas was created in 1924.

Most songs are written about love, so it’s a no-brainer why many classics were about candy.

“On the Good Ship Lollipop,” Shirley

“The Candy Man,” Willy Wonka and the Chocolate Factory, 1971

Has all this talk of candy made your eyes glaze over with longing? Courtesy of CandyFavorites, the Retro Candy Gift Pack includes Bottle Caps, candy buttons, candy cigarettes, Charleston Chew, Chick-O-Stick, Cry Baby Tears, Fun Dip, Mary Janes and so much more.To enter, “Like” us on Facebook and stay tuned for details on how to win.