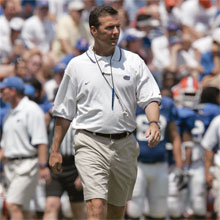 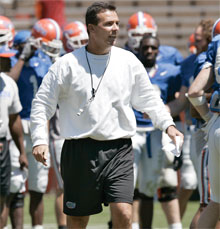 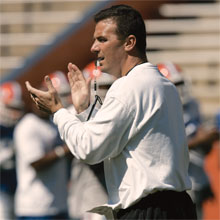 In this exclusive Ocala Style interview, Urban Meyer reveals his plan to live up to the expectations surrounding his inaugural season.

For a while I was beginning to feel like Marshal Sam Gerrard chasing Dr. Richard Kimble. The new football coach at the University of Florida, Urban Meyer, was about as elusive as “The Fugitive.” I had interviewed the last eight Gator coaches — from Bob Woodruff in the 1950s and Steve Spurrier in the 1990s to Ron Zook in the 2000s– and now I was on a personal sports journalism mission to keep my record intact. I was in hot pursuit of No. 9, but just couldn’t catch him.

This Meyer guy was intriguing. Over a period of about six weeks early in the 2004 season, the 40-year-old native of Ashtabula, Ohio, had emerged as the hottest college coaching prospect in the game. Following his undefeated season at Utah — and especially after the vacancy occurred at Florida — some of us had targeted Meyer as the best candidate to replace Ron Zook. Meyer was also in the crosshairs of UF President Bernie Machen, his former boss at Utah.

There was one tiny glitch. Steve Spurrier became available and it looked like Meyer might be going to Notre Dame. Once the Gator deal was done, however, and Meyer stepped up to deliver The Gospel According To Urban on December 8, 2004, we all bought it. And we’ve been buying it ever since. He’s sold it with the fervor of Billy Graham.

Come spring, the chase was underway. Only Meyer wasn’t running away — he was running to the outstretched arms of The Gator Nation. He was traveling around Florida like a rock star, speaking before record crowds at Gator Gatherings, healing old wounds, baptizing Florida football fans with a fresh spirit, and waking up the echoes.

You see, Meyer wasn’t just the pick of President Machen and UF Athletic Director Jeremy Foley, he was ordained by a higher power as the new savior of a program that had been jilted by the Favorite Son of Florida Field and then botched by his replacement.

At last, the Gator Nation had its Surrogate Spurrier. By late summer this year, Florida fans were ready to order their national championship tickets.

For a coach whose only track record at his new school was one spring game, Meyer inherited inflated expectations that soared off the charts. Undefeated? National chaampion?

This kind of supposition — OK, hallucination — is a birthright earned by all those loyalists of the Gator Nation whose membership cards were punched BSS (before Steve Spurrier) and have the bonafide scars to prove it. They all bought it. The fact that Meyer would turn down his dream job at Notre Dame in favor of Florida endeared him with Gator fans forever.

The national media bought it, too. An online Sports Illustrated story rating the nation’s best coaches put Meyer number six and left off Larry Coker of Miami, Bobby Bowden of Florida State, and Spurrier. Further affirmation of the savior’s arrival.

My pursuit resumed last April when Meyer launched his spring practice with 58,000 peering at his new Gators, but the interview didn’t materialize except in a group discussion. It was doubtful I would ever catch up with him once he began his whirlwind 10-state tour in the month of May, during which he flew 14,615 air miles, drove 33 rental cars, and performed 10 speaking engagements over three time zones, and visited 99 high schools. He was home three days that month.

It wasn’t until June 9 in Ocala that I finally holed up with Meyer for 20 minutes in a small meeting room at Central Florida Community College. Just me, Steve McClain of the Florida sports information department, 6-year-old Nathan Meyer, and Urban, who was looming over a plate of barbecued ribs and chicken. We would have to take this thing in small bites.

I told him I would be meeting with Steve Spurrier in Columbia the next week and that I’d seen a recent story where they’d chatted.

“He said some nice things about you,” I said.

“Yeah, that you were an excellent coach and that he expected you to be successful. I’ll send you the quotes.”

You’re not going to seduce Urban Meyer with flattery. He is interested in certain coaches’ techniques and personalities and Spurrier is one of them. He has voiced great respect for The Ol’ Head Ball Coach, but those feelings will soon be put aside.

“I’m sure that’ll be the last nice thing said between the two of you between now and the Florida/South Carolina game,” I added.

There was a thin smile of a man who realizes what’s ahead.

Remarkably, Meyer has tapped into the psyche of his players. His off-season program, which rewards hard work, conditioning, and academics (Meyer has established a “Champions Club” which gives them perks), appears to have worked.

“Right now, I can say anything to them that I want to,” he said with a sense of accomplishment. “Anything.”

It may be that Meyer is looking up at Mt. Everest. He is seen, even by his family, as a man who is able to leap buildings with a single bound. And his own father sent him out in the world with a mandate to achieve excellence.

According to a story in the Cleveland Plain Dealer several months ago, when 14-year-old Nicole Meyer asked her parents why the family had moved twice in three years, her mother Shelley replied, “Your dad is climbing a mountain.”

Nicole asked how much further the family would have to climb. “So is Dad at the top of the mountain yet?” she asked.

The interview in Ocala had gone into overtime. At the urging of McClain, who was concerned that Gator fans downstairs were clamoring for their leader, Meyer stood up and began to move toward the door. We had engaged in a conversation about the great game of college football and whether it was getting too violent.

“Absolutely not,” he said. “I don’t get why everybody talks about ‘reform.’ Why would you want to reform the best game there is?”

Finally, we had a subject we were both passionate about.

Things had gone well, a fact that was confirmed when Meyer looked over at me and said, “You’re good at what you do.”

“You’re pretty good, too,” was all I could think of to say.

“Come see me anytime,” he replied.

I plan to. This is the most exciting time in Gator football since 1990. And I’m convinced Urban Meyer is even money to make it to the top of Mt. Everest.

Buddy Martin has personally interviewed the last nine Gator football head coaches. He is the author of several books about the Gator Nation including Down Where the Old Gators Play: How Steve Spurrier Brought Glory Home to Florida Field and Reign of the Swamp Fox: Florida’s Steve Spurrier Tracks the SEC Legends. Buddy can be reached at buddy@ocalastyle.com.

The Man Who Would Be King

What’s the first thing you changed on the first day of the job?

Changed? A lot of people get opinions that I change a lot of things. I don’t. I’m one of those people who’s not really concerned about how things were in the past, so I don’t really study the past.

It’s really important to me to take care of the football, get first downs, and make sure they [the athletes] are living right off the field. I want to win games.

I remember the day of your first press conference, I asked, “How are you doing?” And you said, “I’ll let you know after I find out.” Was that your first step toward establishing credibility with the team?

I used the word “trust” a lot. I still don’t trust them; I just don’t know ‘em. I’m embarrassed to say it, coaches — and I’m one of them — get far too much credit. Without [Utah quarterback] Alex Smith, without Chris Leak, I’m not me. I remember one time one Big Ten school lead the league in passing and they were the saviors of how to throw the football. The next year, they were last in the league because they didn’t have the same quarterback. I put it all on the players. And I put a lot of pressure on them.

What’s the most important thing you’ve learned so far?

There can’t be anything more powerful than the southeastern part of the country. There can’t be. I mean, 60,000 people at the [spring] game. It’s not like that elsewhere.

You’re coaching everything that moves — fans, students, players. Can you do all this? And how long can you keep on doing it?

The hardest thing for me — and I actually let my secretary do it — is I can’t say no; I’m too appreciative of everything. She’s been the “bad cop,” and she does a good job of it. I focus on my family, my players, and recruiting.

What’s the first thing you changed on the first day of the job?

Changing the attitude and changing the perception that South Carolina can’t win in football. We’ve got everything here to be successful.

What about the changes you’ve made in the uniforms?

We’ve tried to make our uniforms a little more flashy. Put some stripes on the pants. Our players are going to wear white shoes, so our guys will feel fast and quick and feel good in their uniforms. I think all the Carolina fans appreciate us wearing garnet now, which is our true color.

What’s the most important thing you’ve learned since you’ve been at South Carolina?

We’ve always known that South Carolina has some wonderful fans that have supported their team through the thin times as well as some decent times. But I’ve learned that they’re really starving for success, that they’re ready to do whatever they can to make our football program one of the best in the country.

You said you’re more grateful now than ever?

I’m the lucky guy to be the coach here, because this is a wonderful opportunity to coach at an outstanding state university that has all the facilities and resources to be successful, but for some reason hasn’t done it. [I] hope we can get there soon and pay back these fans who have been paying a lot of dues over the years and haven’t received much in return.

There are a lot of similarities between Florida and South Carolina, right?

Tremendous amount of similarity. When I took the job at Florida at 1990, the record the last three years was something like 6-5, 5-6, 7-5, about the same as it’s been here. I’m not inheriting quite as strong a team as that 1990 Florida team, which was very good. But, yeah, we’re in the Eastern Division. Play about all the same conference teams. We’ve got Clemson; Florida’s got FSU.

Is there a good chance that Florida and South Carolina could become the biggest rival for each team?

I don’t think so, not unless we start beating them. You can’t have a rivalry if one side has won every year for 13 years. After the curiosity wears off, hopefully we’ll be competing with Florida for the division.