After recovering from life-threatening injuries, mixed breed canine Molly now relishes a life of ease and serving as the ambassador for Marion County’s animal abuse registry. 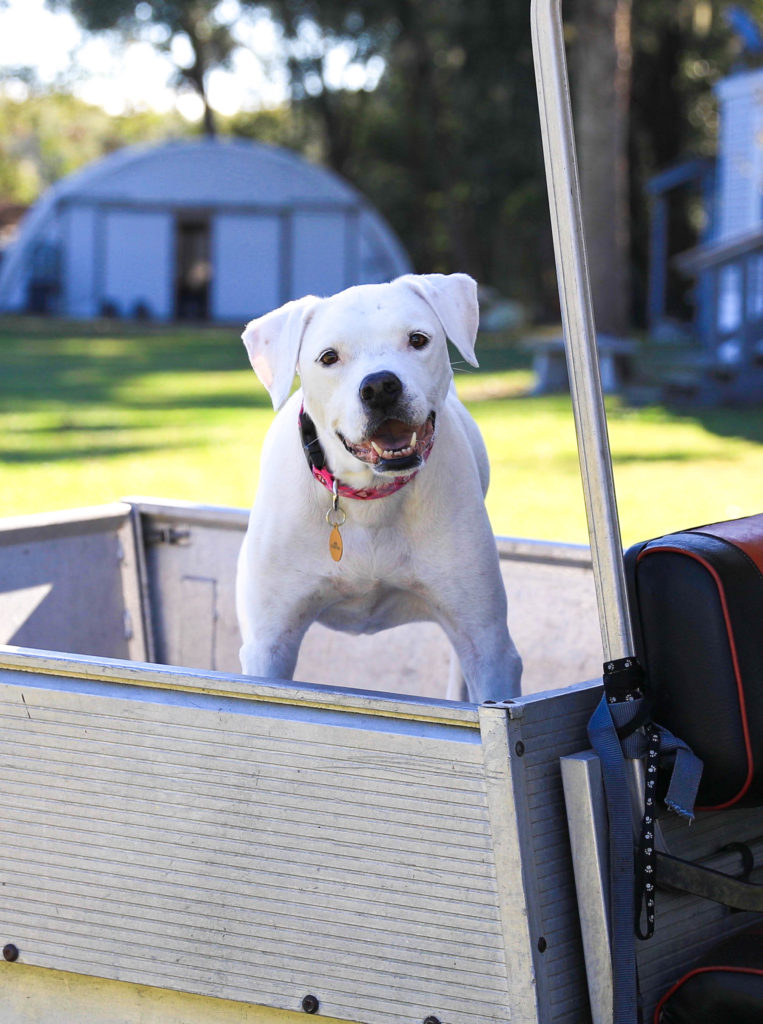 Life is good for Molly, a mixed breed dog who was stabbed three times in the head and had her skull fractured with a baseball bat in early 2014. She now has a forever home with the SPCA of Ocala, where the spunky canine enjoys plenty of play time, golf cart rides and loving care.

After recovering from her horrifying ordeal, the beautiful mixed breed with the soulful eyes has become the namesake of legislation aimed at publicly identifying those convicted of animal abuse.

According to the county website, “the Marion County Board of County Commissioners established an animal abuser registry, otherwise known as Molly’s Law. That law requires that any offender convicted of an animal abuse crime as defined in Marion County Code, Chapter 4, Section 4-15 to be placed on the animal abuse registry. The online database allows citizens, pet sellers and rescue organizations to verify that they are not placing an animal with an animal abuser.”

Molly’s accused attacker, Steven Scott Fleming, served time in state prison on three counts of felony cruelty to animals. He no longer appears on the registry because listings rotate off in certain time frames.

Before the pandemic stalled many public activities, Molly was busy as an ambassador for the registry

“Because of COVID, Molly has been spending more time with her best canine friend,” offers Lilly Baron, President of the Society for the Prevention of Cruelty to Animals of Ocala (SPCA). “And Molly is really loving her golf cart rides twice a day around the neighborhood. When she was doing all the events, she only got to go around once a day. It’s great to see neighbors running out and waving and yelling ‘Hi Molly!’”

“And we are very involved in education about the animal abuser registry, teaching the public if you see something, say something,” Baron notes. “We are very active in working with Director Jim Sweet of the Marion County Animal Center and County Commissioners. One of the goals for the SPCA of Ocala is to lobby for a statewide animal abuser registry.”

Baron notes that SPCA of Ocala holds a Class III license with the Florida Fish and Wildlife Conservation Commission. All adoptions are on hold because of the pandemic.

The registry is accessible at www.marioncountyfl.org/aar

For specifics on the county ordinance, visit https://bit.ly/33GP4OA

To learn more about SPCA of Ocala, visit www.spcaofocala.org

How to Report Animal Abuse

According to the Marion County government website, animal control officers respond to more than 10,000 calls a year and are on-call for emergencies 24 hours a day. They rescue injured, sick or stray domestic animals and investigate aggressive attacks, as well as animal cruelties that can range from one-animal cases to large-scale incidents involving hundreds of animals.

To report an animal-related concern or complaint:

Marion County Animal Control provides assistance to incorporated cities upon request, but residents should contact the municipality in which the animal-related situation is taking place. If you are unsure if you are within a city’s limits, call animal control.