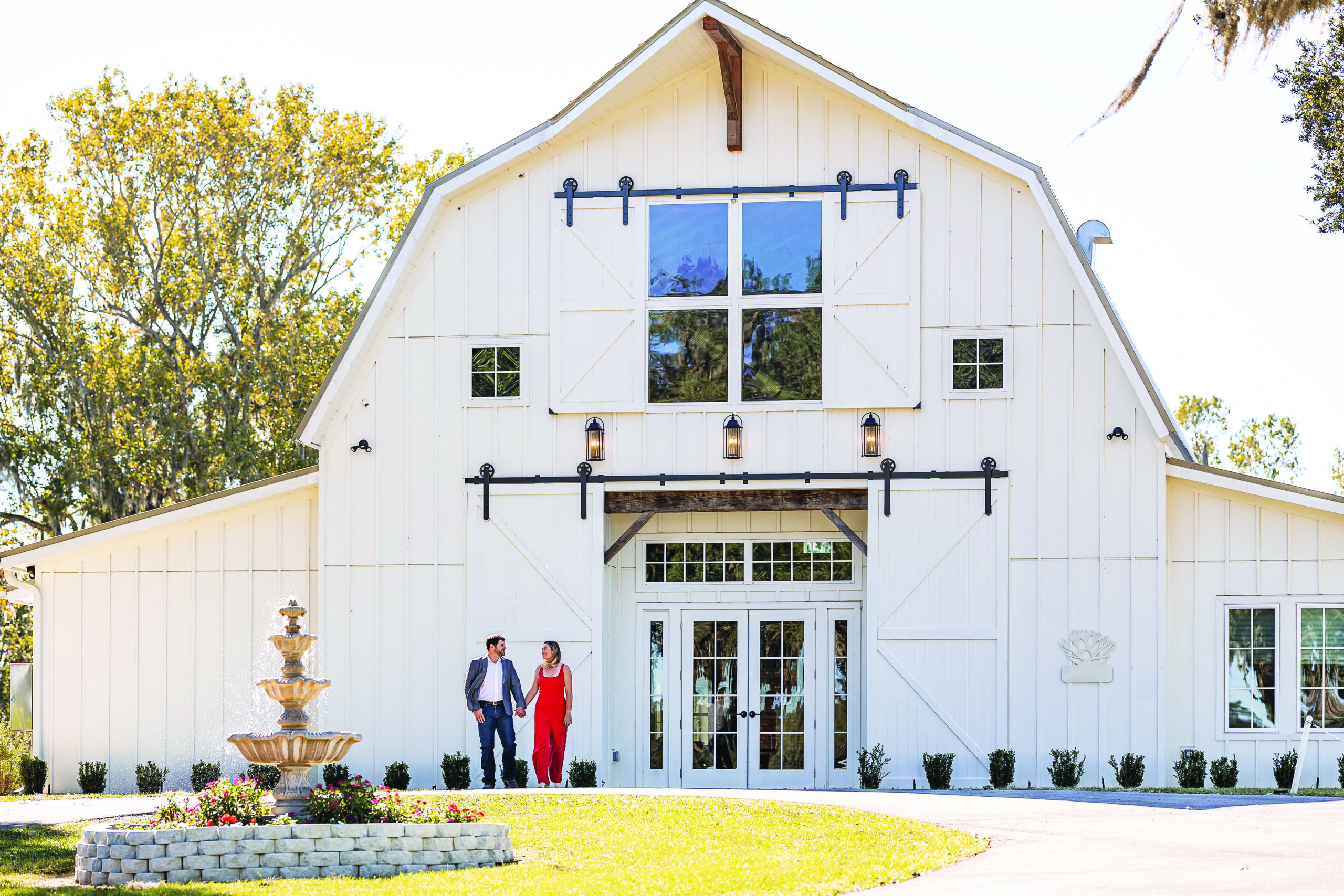 From top-ranked equines to their unique wedding venue, this young couple is creating a legacy built on quality.

Work hard. Dream big. That mantra has been the basis for many successful entrepreneurs throughout history. Add a willingness to never stop learning and a firm belief in relying on your own proven methods and you will find the made-for-the-movies story of Joe Pickerrell and Courtney Roberts Pickerrell.

This dynamic young couple, both of whom have been involved with equines since they were children, are at the top of their game in training and showing thoroughbred and barrel racing horses at the highest levels and running their successful Protea Wedding & Events venue, which has a unique history all its own.

The story of how it all started begins with a horse named JSYK (Just So You Know) I’m Famous, who they nicknamed “JR.” Courtney grew up in South Florida. Joe was born and raised in Ohio. They met while enrolled in the College of Central Florida’s (CF) Equine Business Management program. They had been seeing each other for about two weeks when she asked him to accompany her to a futurity barrel horse sale in Oklahoma.

“I had just moved up here and was in school full-time,” Courtney recalls. “I had saved $5,000, which was a lot of money, in hopes of buying myself a prospect. Joe tagged along and we made it a fun road trip. They had sale catalogs and, out of about 100 horses, there were four or five that we both agreed looked nice and there was one we both put a star on. Sale day comes and we are sitting in the stands and I have $5,000 hoping to buy that horse. He’s in the ring and the bidding starts and it’s $2,000 and somebody bids $2,500 and we’re to $3,000 and I’m nervous cause we’re getting close to my limit. I think I have the $5,000 bid, and now, I’m upset because somebody hits $6,000 and I’m like, ‘We came all the way out here; we lost this horse…’ The bid stops at $6,900 and I am crying over this horse!” 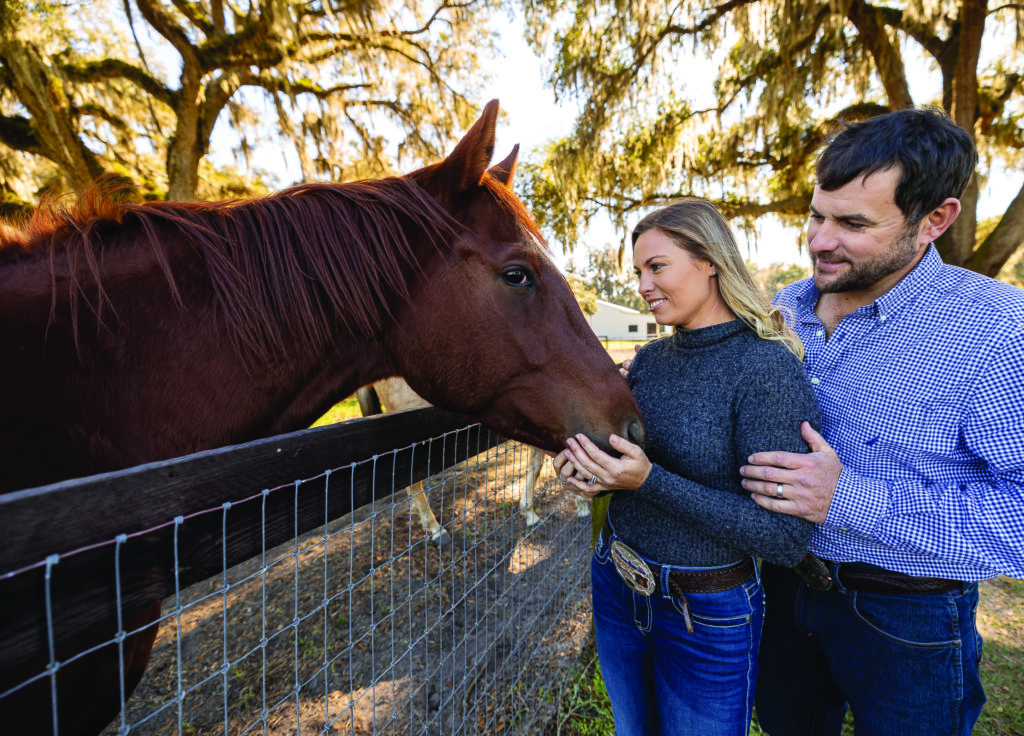 With fresh tears in her eyes, Courtney continues, “I have my head turned the opposite direction because I don’t want Joe to see me crying. The bidding stops and the guy points at me and goes ‘Sold! $6,900’. And I’m like ‘No, no, no, this is not our bid’. So, I look over at Joe and he’s smiling.” “I took over after she ran out of money,” Joe adds with a mischievous grin.

“So, we bought him together and traveled the country and set numerous arena records all over,” Courtney states. “We won everything there was to win on this horse. A rodeo girl in Texas had been trying to buy him for a long time, but I would not sell him.” Fast forward a bit. Courtney and Joe traveled to South Africa, where her family on her mother’s side lives. They attended the wedding of her cousin, which took place in an old dairy barn.

“In South Africa, these old barns are very, very popular; they’re everywhere. Joe and I fell in love with the venue,” she recalls. “We came home and got engaged, so, of course, we started looking for a wedding venue like the one we had seen. We looked at several, could not find what we wanted. Then, my other cousin got married in South Africa, so we flew back over for her wedding…once again in an old dairy barn. That’s when the talk started about what could we do to build something like this in Florida.”

“We started looking and there were three-, four-year waits on some very average venues,” Joe remembers. “And we’re like, ‘This might really be an actual business and not just a dream we had on an airplane coming home from South Africa.’”

Courtney said Joe had started to establish a thriving business with his racing horses and, around the same time, she was not able to be on the road as much as she needed to with JR. 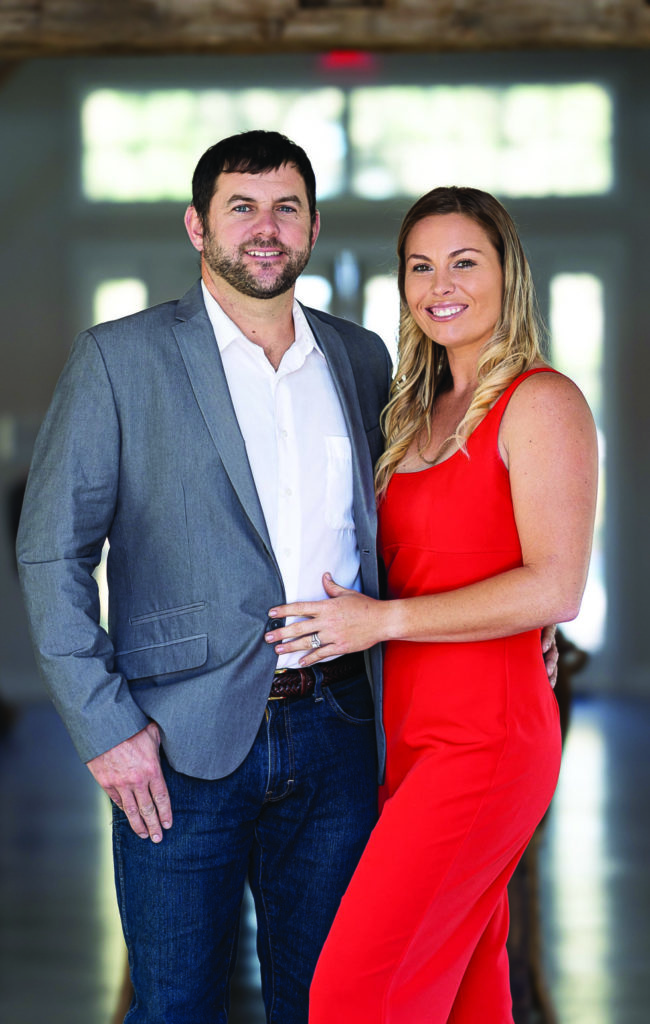 “It was stopping me from trying to make the National Finals Rodeo, which is where the horse belonged,” she says, her voice wavering. “So, I sold him to the girl out West who promised me she would make the Finals on him and make us proud. I sold him in 2016 and that is the year we bought our historic barn frame and started the building process and then, in 2017, JR ranked No. 1 in the world. I got to fly out there when he made the finals and be with him. He is pretty much the heart behind Protea because, without him, we would have never been able to start it. Still, to this day, when Joe and I go to the yearling sales to buy the thoroughbred racing prospects, we use the same exact method as we did when we bought JR.” “And it works,” Joe asserts, “because we’ve had horses run the Kentucky Derby three years in a row. We have had horses win the Breeders’ Cup and have a bunch of exciting ones that are coming up now.”

Valerie Dailey, president of the Florida Thoroughbred Breeders’ and Owners’ Association, met Joe when she was teaching a pinhooking class in the equine program at CF. “He was a great hand, extremely helpful, with a very calm demeanor and very knowledgeable,” she shares, “He’s got a good eye for horses and has customers willing to help purchase those horses. Then, he brings them along and resells them and they go on to perform on the tracks and that’s a true testament to his horsemanship abilities.”

She says the young couple both are “great, genuine people who work really hard for their customers.” Dailey helped them buy their first farm together, then later purchase the final 40 acres of the 85-acre property, formerly the Cashel Stud Farm, where they now base their equine business and Protea Weddings & Events.

The Pickerrells and Courtney’s mom, Bev Roberts, operate Protea, pronounced “Pro-tea-uh” in the US, says Courtney, but “Pro-tay-uh” in South Africa. The king protea is the national flower of South Africa. Courtney says they chose the name as a nod to her family’s heritage. 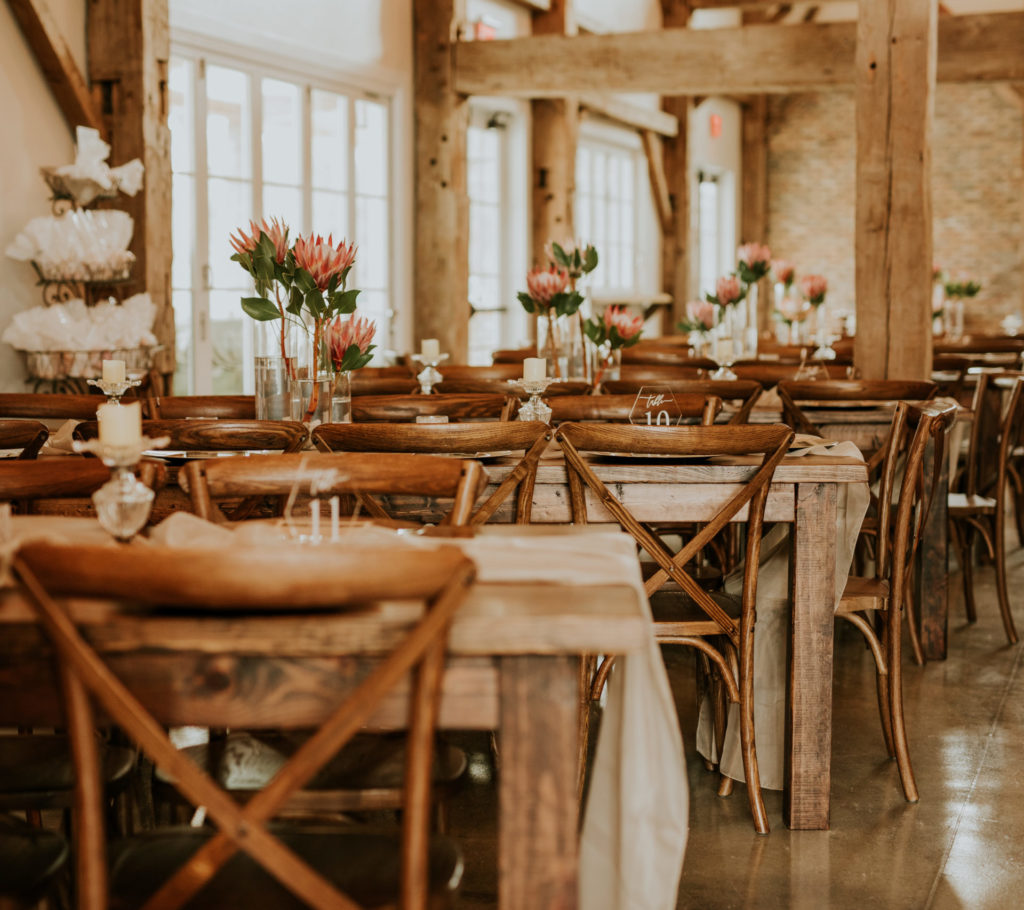 Those who visit Protea Weddings & Events follow a winding road past ancient oak trees, rolling pastures and horse paddocks. At the crest of a hill is the magnificent “swing beam” barn venue envisioned by the couple in the early days of their romance.

The “bones” of the barn are massive, hand-hewn hemlock beams with smaller beams anchored with wooden pegs. “Heritage Restorations, based in Texas, finds old, historic barns around the world and takes them down and rebuilds them into wedding venues, homes, whatever you like,” Courtney offers. “This barn was built in 1850 in Canada. They shipped it here on the back of a semi. This barn was built to farm wheat. The swing beam allowed for a clear span in the center, so farmers could walk their animals in circles and thresh out the wheat on the ground. Then, they would toss it up to the loft to dry. When we started talking about building a wedding venue out of an old, historic barn, people thought we were crazy and said it was never going to work.”

“Mega Construction in Ocala was the only company with the confidence to tackle it,” Joe shares, “And they mastered it.” Building onto the barn frame involved adding a catering prep kitchen, bridal salon and groomsmen’s area. A spacious patio allows parties to spill outside. The venue can accommodate up to 200 guests for events such as weddings, birthday parties, baby showers and holiday festivities.

The initial plan was for Courtney and Joe to be the first couple married there but, as the pandemic spread, her family members in South Africa could not travel to America. It was serendipitous that the global plague actually provided them with a boom in business.

“When we opened in June 2020, we were swamped. I was getting frantic emails and phone calls from brides in states that had harsher regulations than we did and their venue had closed or would only allow a few people,” Courtney notes. “It didn’t matter if it had to be a Tuesday or Wednesday or Thursday, there were moving everything to Florida.”

“We planned to ease into this, as most weddings are planned over a couple of years on average, and we were throwing together all these weddings on short notice,” Joe shares, adding, “We went right into the deep end.”

Making It Matthews, a wedding and event business operated by Camilla Matthews and her daughter-in-law, Kayla Matthews, often provides services at Protea. Camilla says Courtney and Joe are professional and dedicated.

“They are on-hand, taking care of their stunning venue and so much more; they truly care about the brides that choose their venue for their big day. They also care about each vendor being successful. They treat each couple, vendor and guest as though you are walking into not just their venue, but their home.” 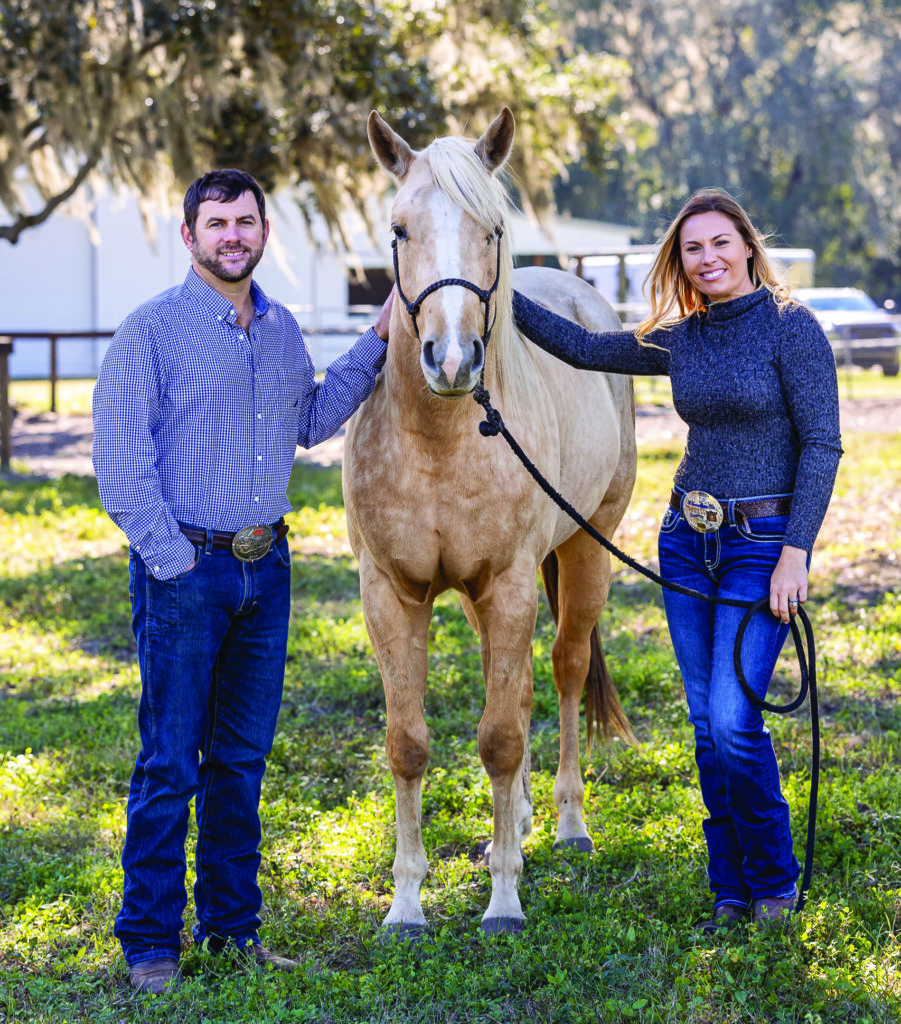 Courtney and Joe were finally married in their beloved historic barn in January 2021. In their scarce free time, they love to go saltwater fishing, travel and dote on their four canines. She is returning to the barrel racing arena and he has built his thoroughbred racing herd up from seven to 70 horses. They both say that training championship horses is somewhat akin to running a bustling event venue.

“It takes a lot of time and patience,” she shares. “We both love good-pedigreed horses and I think the key to being a successful trainer, whether it’s racehorses or barrel horses, is to never stop learning. I am continuously trying to watch professional barrel races and have open ears. You can’t get stuck going one particular way because it might work for one horse but not another. No matter how much you think you know, there is always something else you need to learn.”

Joe says buying and selling horses, especially when they win at the highest levels, “solidifies our program and the horses we pick out. That’s the great thing about buying yearlings at auction; anybody can buy them, but the ones we select is our portfolio and we take pride in the quality of our group. With the venue and the horses, it all takes hard work and discipline, and scheduling is very important.”

“There have been many times when I’ve wanted to throw my sucker in the dirt,” Courtney says with emphasis, reflecting on how a child might react to a challenge. “But we are always trying to grow in different ways. We’re both always looking forward: What can we do to make this horse faster and make the venue more sought after? We’re very blessed and we’ll never take any of what we have for granted, ever, but we’re never going to wake up and say that’s enough. We’re never going to settle.”