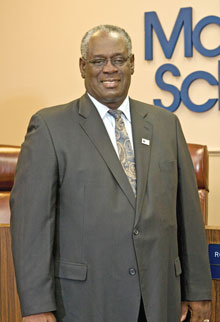 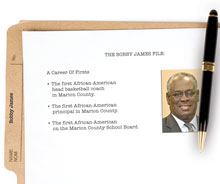 Bobby James speaks softly, but doesn’t carry a big stick. Instead, he wields a hefty 35-year career in education that garnered him an appointment to the Marion County School Board. On August 10, Governor Charlie Crist named James to fill the seat vacated by newly elected Florida Congressman Kurt Kelly. James was formally sworn in on August 14 and will serve in the District 3 seat until 2008.

While the seat’s term doesn’t officially expire until 2010, state law prohibits an appointed candidate from holding office more than 28 months. That will necessitate an election for the seat in 2008 and 2010.

Odds are that James, who has an enduring passion for education, will be a candidate in both those elections.

“Education gave me a whole different perspective on life,” says James, 60, who grew up in northwest Ocala as the seventh of 11 children. “It gave me opportunities and put me in contact with people that never would’ve happened otherwise. Education put me in the right place at the right time. And that’s what we need to continue to do for the children of Marion County.”

For Jim Yancey, superintendent of Marion County Schools, the appointment of James was the right choice at the right time.

“First and foremost, Bobby James is focused on the kids of Marion County,” says Yancey, who was initially appointed to his position by then Gov. Jeb Bush in 2003 before being elected in 2004. “He’s going to work for student achievement and student citizenship at the highest level.  And his depth of service in the school system makes him a very strong candidate when election time rolls around. This is important because continuity is the key to get things done in a position like this.”

Since 1971, when he began his education career as a social studies/history teacher and physical education instructor at Forest High School, James has focused on the needs of Marion County’s children. He went on to become a head basketball coach at both Fernandina Beach High School in Nassau County and Forest High School. Then there were stints as principal at Fessenden Elementary, Phoenix Center, and Dunnellon High School. He served in the latter position for 13 years, retiring in 2006.

While acknowledging those accomplishments, James considers them secondary to his primary role as an educator.

“Yes, I’m an African-American,” he says. “And, yes, I was the first one in each of those positions. Those are facts, maybe even interesting and important facts. But the key is that I use those positions to be of service to the children—and to show them how important education is in their lives.”

It was his mother, Minnie Lee James, who first impressed the importance of education to her son and his 10 siblings. A young widow who never remarried, she had only a third-grade education and was determined that her children would do better.

“My mother worked hard and made sure that all her children graduated from high school,” says James, adding proudly, “seven of the 11 went on to earn college degrees.”

James was one of those seven. A star high school basketball player, James earned an athletic scholarship to Central Florida Community College. Two years later, he transferred to Paul Quinn College in Waco, Texas, where he earned his Bachelor’s degree in education. Then it was on to Nova Southeastern University, where he collected a Master’s degree in supervision and administration. He is currently working on his doctorate at Nova.

As for his goals in his new position on the Marion County School Board, James isn’t reticent. While soft-spoken, James knows how to gain attention without shouting. He just looks someone right in the eye and says what he believes, what he knows.

“We need to extend and enhance the school day; add more extracurricular and vocational training opportunities,” he says, keeping his voice low, but taking off his glasses and leaning forward across his desk. “The drop-out rate has risen because kids lose interest. Not every child is going to go to college, not every child is going to be a star athlete, but every child is going to have to go out into the world. They need the tools to survive and thrive. We as educators need to provide them with the programs to accomplish that or we haven’t done our jobs.”

The melding of those two entities is also present in James’ new business enterprise. Established in 2006, James Development and Investment Corporation, LLC, is working on revitalizing the northwest Ocala area that James grew up in. Working with the City of Ocala and local contractors, James wants to build quality affordable homes in a neighborhood setting.

“The environment that kids grow up in is just as important as their school environment,” says James. “We have to look at the big picture and at the impact we all have. We have to remember that individually we have very little, but collectively we have a lot.”

A Career Of Firsts