Think of hormones as our bodies’ signal callers, the quarterback of the team. Without hormones relaying the plays, our essential functions would, well, malfunction. 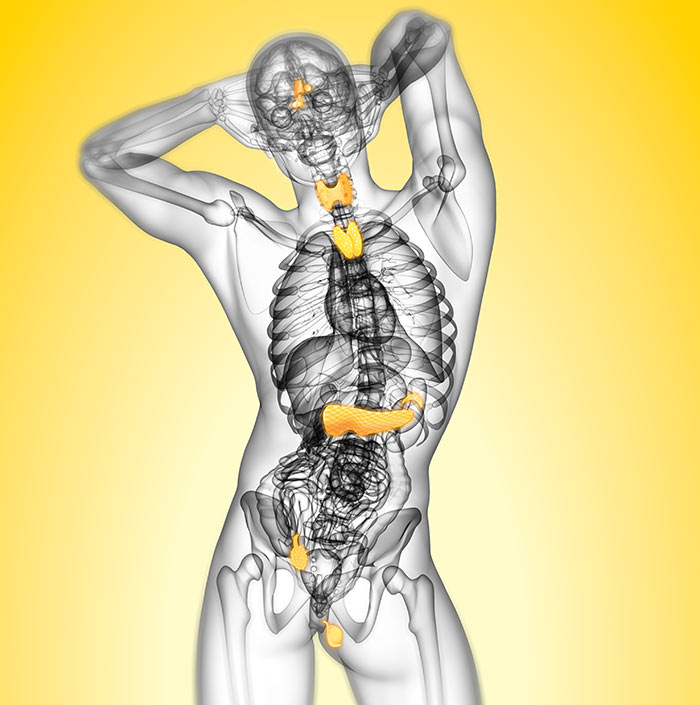 rtant chemical messengers are produced by our endocrine system, which is a network of glands in the body. This intricate system includes the hypothalamus, pituitary gland, pineal gland, thyroid, parathyroid, thymus, adrenal gland, pancreas, ovaries and testes. The hormones that the endocrine system regulates control such functions as our growth and development, reproductive processes, metabolism, sleep, mood and sex drive. In other words, hormones affect almost every organ and cell in the human body.

“When choosing a medical specialty, I settled on endocrinology for several reasons,” says Dr. Henry Anhalt, an endocrinologist and Endocrine Society spokesperson. “I found endocrinology to be fascinating. And the endocrine system is truly at the center of the body’s universe.”

Hypothalamus: Part of the lower middle brain, the hypothalamus releases hormones to signal the nearby pituitary gland when to secrete its hormones to the rest of the body.

Pituitary: Pea-sized and located at the base of the brain behind the sinuses, the pituitary gland is often referred to as the “master gland” because it greatly influences many other glands in the body, especially the thyroid. It produces peptide hormones that influence growth, lactation, healthy blood pressure, stress levels, thyroid hormones, estrogen, testosterone, egg and sperm production, as well as the body’s water balance.

Pineal: Found near the center of the brain, the pineal gland releases melatonin, the hormone that controls sleep patterns and the production of hormones related to the reproductive organs.

Thyroid: A butterfly-shaped gland in the front of the neck, the thyroid releases T3 and T4 hormones that control metabolism. These hormones also influence the way the body uses energy, consumes oxygen and produces heat.

Parathyroid: A group of four small glands located behind the thyroid, the parathyroid works with the thyroid to control calcium and phosphorous levels vital to bone development.

Thymus: Situated in the upper chest, the thymus helps develop the body’s immune system early in life. It produces thymosins, hormones that control white blood T-cells, which our immune system utilizes to fight off infections.

Adrenal: There are actually two adrenal glands, one each on top of both kidneys, which produce the steroid hormones cortisol, testosterone and aldosterone, as well as noradrenaline and adrenaline. Also known as the “fight-or-flight” gland, the adrenals control how we respond to stress. The adrenal glands also promote proper cardiovascular function and help control blood sugar levels during times of stress.

Pancreas: Located behind the stomach above the small intestine, the pancreas is surrounded by small, slightly granular endocrine cells, known as the islets of Langerhans. Islet cells secrete insulin and glucagon, both of which stimulate glucose (blood sugar) in the body.

Ovaries: Stimulated by hormones from the pituitary gland, the female ovaries produce estrogen and progesterone, which promote breast development and maintain a healthy menstrual cycle.

Testes: This pair of glands produces testosterone, which is responsible for penis growth, facial and body hair, a deepening male voice, muscle and bone mass, sperm production and sex drive.

The endocrine system orchestrates a delicate balance of hormones for the body to function at its best. If your body has too much or too little of a certain hormone, the endocrine system sends out a correction signal. But sometimes that feedback system is disrupted, leading to a possible endocrine disorder or disease. Factors that can negatively affect the endocrine system include aging, certain diseases or health conditions, stress, the environment, genetics, tumors or an injury to an endocrine gland. Endocrine diseases are typically put into two groups: a hormone imbalance or the development of nodules or tumors in the endocrine system.

“Aging, which affects the endocrine system, is just a natural process that everyone has to undergo,” says Anhalt. “We’ve seen a burgeoning anti-aging industry spring up in the last decade, promising the fountain of youth by taking certain hormones, like growth hormones. But the truth is that there is no scientific evidence to back these claims.”

Instead Anhalt recommends what he calls “the age-old advice of eating well, getting regular exercise and staying engaged in life to keep your endocrine system working well.” To which he also adds that “men and women need to get their regular health screenings, especially as we age, and follow their physician’s advice.”

And, according to Anhalt, the endocrine system could use a little more respect in health care.

“When it comes to patient care, doctors should look at the endocrine system’s impact on the body,” says Anhalt. “For instance, when the parathyroid malfunctions, it pulls calcium out of the body, and this can lead to osteoporosis. An adrenal gland issue can cause high blood pressure. In addition to insulin, the pancreas produces glucagons, and this has an impact on liver function. The best way to put this is that endocrine system malfunction can often be the underlying cause of myriad health issues.”

There are dozens of endocrine disorders with diabetes being the most commonly diagnosed one in the United States. Diabetes occurs when the endocrine cells in the pancreas do not produce enough insulin or the body doesn’t properly use insulin, becoming insulin-resistant.

“We live in a societal environment that over stresses the pancreas,” says Anhalt. “This includes diet issues and not enough daily exercise that have led to an epidemic of obesity and in turn type 2 diabetes. And while we endocrinologists admit we really don’t know what causes type 1 diabetes, it is also on the rise. Both types of diabetes are caused by malfunctioning of the overstressed pancreas’ insulin delivery system.”

In diabetes and other endocrine diseases, such as hypothyroidism, the patient is treated with synthetic hormones to restore the body’s hormonal balance.

Hypoparathyroidism: This is a condition where there is too little parathyroid hormone in the body, which can cause abnormally low levels of calcium in the blood. Symptoms can include nervousness, headaches, weakness with muscle cramps and spasms.

Cushing’s disease: The overproduction of a pituitary gland hormone leads to an overactive adrenal gland and can cause Cushing’s disease. The latter causes fat to accumulate in the face, back and chest and can also lead to acromegaly, in which the hands, feet and face are larger than normal.

Hypopituitarism: When the pituitary gland releases few or no hormones, hypopituitarism may develop. Women with this condition may stop getting their regular menstrual periods.

Polycystic ovary syndrome (PCOS): A leading cause of infertility, PCOS occurs when the ovaries produce too many androgens that interfere with the development and release of eggs.