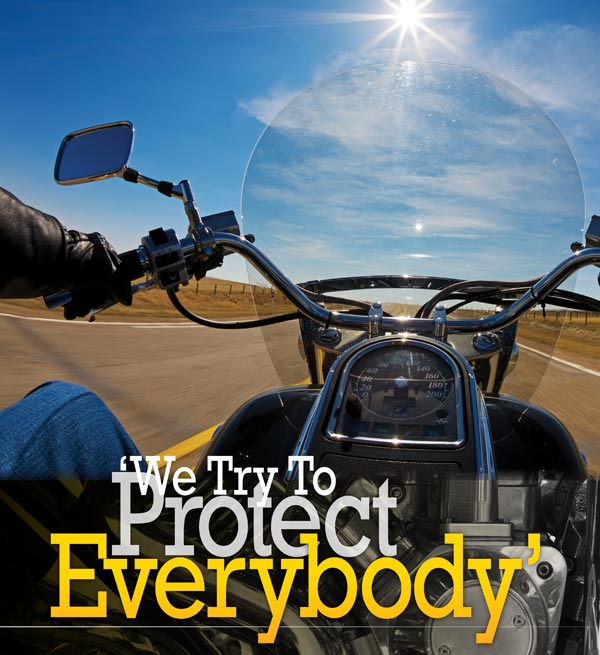 When all goes well, Central Florida’s gently rolling hills and long stretches of highway are a motorcyclist’s dream. But as local attorney Brent C. Miller has seen far too many times, one mistake can spell disaster for bikers, especially once the costs mount.


Popular Lake County attorney Brent C. Miller doesn’t just talk the talk when it comes to motorcycles. The Illinois native, who first opened his Lake County law practice over 15 years ago, has been riding since he was just a kid.

“I got my first motorcycle when I was 12. Now I ride a few times a month out at Sugarloaf Mountain and down in south Lake County,” says the Harley owner. “It’s just being out on the open road, being out in the country. You’re closer to nature when you’re on your bike compared to being in a vehicle.”

Yet Miller would be the first to attest to just how perilous that open road can be for motorcyclists. As a personal injury attorney with more than 20 years of experience, he has seen first-hand the devastating and even catastrophic results of motor-cycle accidents. At any given moment, riders are at the mercy of other drivers—both to avoid an accident in the first place and to have proper insurance coverage if one occurs. But the problem is far too many motorcyclists don’t have sufficient insurance coverage themselves.

To say medical costs after a vehicular accident can exceed $10,000 quickly is akin to saying that sometimes drivers exercise poor judgment on the road. Of course it does, and of course they do. In the past, Miller has handled cases in which medical costs have skyrocketed to $300,000. He personally has a $1 million uninsured motorist policy on his own bike. 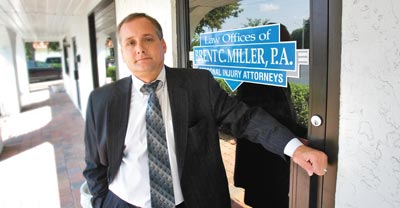 “I give a lot of talks to different motorcycle groups—Gator Harley, the HOG Chapters, the Leesburg Bikefest—to stress that even if you’re in a car, Florida does not require that you have bodily injury coverage,” Miller explains. “The risk is you’re on a motorcycle, you don’t have any coverage, and the person in the car that hits you doesn’t have any coverage.”

Miller’s associate, attorney Thomas Hippelheuser, finds that most accidents are not the fault of the motorcyclist, although the motorcyclist usually endures more bodily harm.

“As much as 90 percent of the people who call us, it was exclusively the car’s fault,” he says. “The vast majority involve cars that simply didn’t see the motorcycle. They cut them off, stop suddenly, turn without signals. And a minor fender bender for a motorcyclist could be catastrophic.”

While Miller prefers that all motorists remain safe on the roadways and never require his services, his law office excels in handling motorcycle cases, which make up some 15 percent of its total caseload. Most recently, Miller settled a case in which a motorcyclist had lost his leg in an accident and was facing $279,000 in medical expenses. The hospital agreed to $10,000 as full payment.

If the case does reach the courtroom, however, Miller offers his clients a particular edge as their counsel.

“We get a lot of comments from defense lawyers saying, ‘People who ride motorcycles are not looked at favorably by jurors,’” Miller admits. “But because I’m out there and socialize with people who ride bikes, I know that the stereotypical motorcyclist of 30 or 40 years ago is completely different demographically today. Now, it’s CPAs, doctors, lawyers, and stock brokers who ride, so I think I’m in a better position to screen jurors and make arguments.”

Miller encourages all motorcycle accident victims to schedule a free consultation with his firm to review the facts of their case, but in the meantime and as long as the open road keeps beckoning riders, Miller will continue his efforts to inform the public about adequate insurance coverage.

“We simply try to educate people on the law,” he says, “and try to protect everybody.”

Offices in Tavares, The Villages,
Inverness, and Clermont