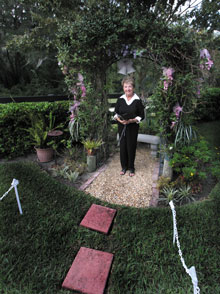 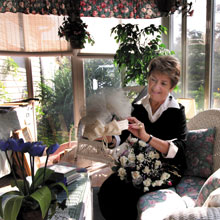 Couples stand under the pergola wrapped in beautiful honeysuckle vines with wedding bells hanging from the arch. Their vows are exchanged not in a chapel in the woods or in a church on a town square, but in Vita Crain’s backyard.

Vita’s backyard in The Villages is the perfect place for civil weddings because she is an established notary public and can perform weddings. Only Florida, Maine, and South Carolina allow notaries to officiate at weddings.

“I get so much joy out of it,” Vita says with a smile. “I’ve been performing marriages for 16 years. I started when I lived in DeLand before I moved to The Villages.”

Vita says most Florida notaries choose not to perform weddings. However, she decided long ago to limit her duties to weddings and loan closings.

“My ceremony is very special. It lasts about 15 minutes and it is very meaningful,” she says. “I like to include guests and have them say something, too.”

She meets with each couple a week before the ceremony to go over the vows and make whatever changes or additions they would like.

“I always refer to a higher power and I like to say a prayer of blessing, but I can easily remove or change that if it’s what they want,” Vita says. “I wear whatever they like, although I do insist on dressing to look like a professional. I want the focus on the couple.”

In DeLand, Vita officiated weddings on the beach, but now that’s she inland, she stays in the tri-county area.

“I do travel, and there are so many beautiful places to perform weddings in The Villages,” Vita says. “I’ve done them on the boats that tour at Lake Sumter Landing and at Church on the Square. My backyard will accommodate about 10 people, so the weddings here are very small.”

Vita has performed more than 500 weddings over the years and has been keeping a computer record of them for the past 10 years.

“The oldest person I’ve married was 88 years old,” Vita says. “There isn’t too much I won’t do, except I will not jump out of an airplane. I was asked to once, and I said, ‘No way.’”

Vita’s lanai has a delightful tropical theme, so she usually invites guests to have sparkling grape juice or champagne after their wedding. Her property is adjacent to private property that has only one house on 10 acres, so it’s a very quiet and private place for a wedding.

“She was terrific,” says Francis Sullivan. “She married us Feb. 17, and it was as if it were a church wedding.”

John and Francis married at the Cattle Baron Club above Katie Belle’s Restaurant in The Villages.

“Vita is very considerate. She made favors for us, and her husband helped with the music,” Francis says.

Francis says she found Vita’s phone number and just took a chance with the notary public. Prior to the Sullivans’ wedding, Vita met with them once again to go over the complete ceremony.

“We had 26 people, and it was just beautiful,” Francis says. “Vita is really a nice woman and she does a beautiful ceremony.”

Married 11 years to her second husband, Robert, Vita’s own romance sounds like it came straight from a novel.

“My first husband died when we were both very young, and he told me he didn’t want me to go through the rest of my life alone. But I didn’t really take that seriously.”

Eventually, Vita decided to sell his one-ton truck and took it to a detail shop.

“It was working great and had nothing wrong with it,” Vita says. “On the way to the detail shop, I reached up to adjust the mirror and it broke off.”

The men at the detail shop recommended she take it to a glass shop in DeLand for repairs. There, she met Robert Crain.

“It was very unusual for him to be in the shop that day,” Vita recalls. “He fixed the mirror, and then the truck wouldn’t start. It had been working fine, and then all of a sudden, it wouldn’t make a sound.”

Once again, Robert came to the rescue. He went with Vita to the auto parts store, got a new starter, replaced the damaged one, and the truck started beautifully.

“I was so thankful, and I really wanted to pay him for his trouble, but he wouldn’t let me,” Vita remembers.

Instead, Robert suggested a milkshake at Wendy’s.

The rest, as they say, is history. However, Vita doesn’t think it was just a chance meeting.

“I don’t believe in coincidences,” Vita says. “There’s always a reason why things happen, and there’s a reason why you meet the people you do.”

Any day is a good day for a wedding for Vita, and she keeps bouquets, headgear, favors, and invitations on hand to help with the preparations. She also sends cards for anniversaries and stays in touch via e-mail with many of her couples.