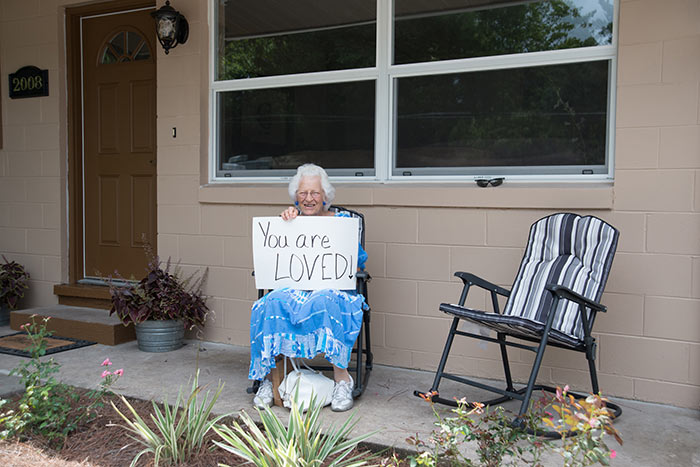 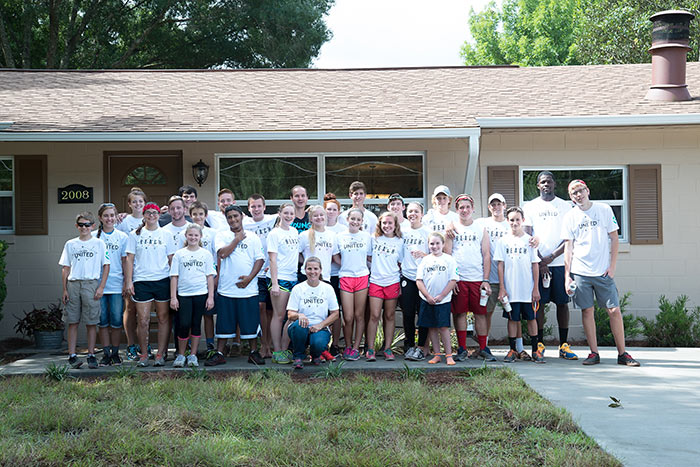 All you have to do is turn on the nightly news or scan the headlines to be reminded we’re living in troubling times. There’s no denying that darkness and evil abound, yet we recognize them because they stand in stark contrast to their opposites: goodness and light.

And make no mistake, goodness and light also abound. Just ask Landon and Jenni Cassidy, and their children, Caroline, 9, Clayton, 6, and Callie Rae, 1.

Married 11 years, Landon and Jenni have lived in Ocala that entire time, and Jenni’s lived here since she was born. Landon works at SPX, while Jenni, a stay-at-home mom since her last child was born, has worked as a Marion County teacher and also led Future Farmers of America (FFA) and 4-H groups. The couple is actively involved in their church and community, routinely helping others and offering assistance in any way possible. Yet, despite their diligence and work ethic, the Cassidy family had stumbled into hard times.

During a storm in 2011, a tree limb fell on the roof of the house they owned in Silver Spring Shores, damaging the structure’s integrity and eventually leading to mold and other problems. Over the next year, Landon and Jenni struggled to come up with enough money to repair the roof but could not afford a complete fix. After trying everything possible, they ended up having to “short sell” the house, which caused their credit rating to take a huge hit. 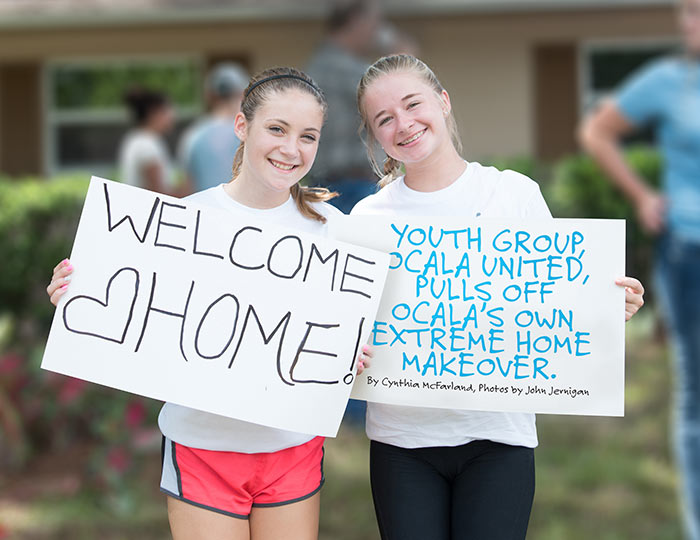 Jenni’s parents, Steve and Julie Upton, also of Ocala, owned an older house in the Fore Acres neighborhood, which they’d bought as a “fixer-upper” and intended to turn into a rental. They agreed to let Landon and Jenni rent to own, and the Cassidys moved into the house in December 2013. The house needed a new roof and drain field, which they were able to replace, but Landon and Jenni simply didn’t have the money to address the failing AC/heating unit, faulty windows and crumbling driveway.

“We were able to save enough money to do some necessary work, but everything else was on hold,” relates Jenni, who was pregnant at the time with the couple’s third child. When that baby, Callie Rae, was born in June 2014, she had health issues, which required testing and doctor visits. Those mounting medical expenses only added to the Cassidy family’s financial difficulties. 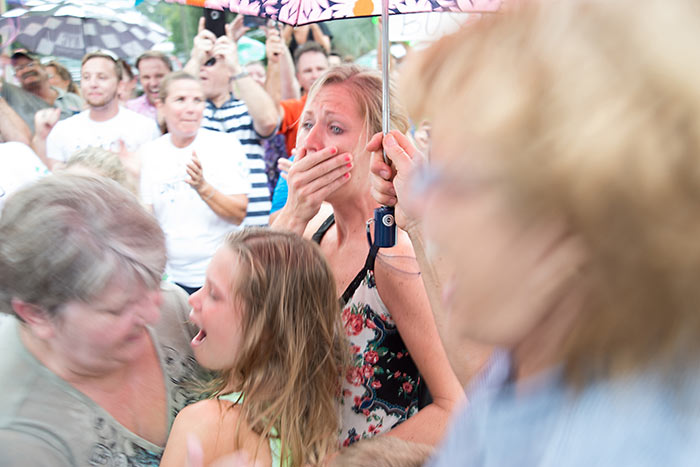 “This is a working family trying to help themselves. They never complained. You’d never know they were struggling because they never asked for help. They just worked harder and harder, but they needed help to get their feet back under them. This is a family that has been known for their generosity; they’ve always been willing to help someone if needed,” says Judy Overfelt, who first met the Cassidys in 2001 through their 4-H club when Jenni helped the Overfelt children get ready for the Southeastern Youth Fair.

That’s when Judy’s son, Matt, came up with an idea. Matt had founded Ocala United, a Christian youth group in Ocala in 2014. The students involved in Ocala United had traveled to Nicaragua the last two summers for a mission trip and had already conducted several fundraisers to raise money in anticipation of this year’s trip. Why not, Matt suggested, help a local family instead of traveling overseas? The idea was to renovate the Cassidys’ home reminiscent of the former TV reality show Extreme Makeover: Home Edition.

The kids needed no convincing. They were all in.

Matt and Judy stepped up to help solicit donations from area businesses. When all was said and done, Ocala United received nearly $60,000 in materials, products, labor and monetary donations. It was an amazing accomplishment, especially considering Ocala United is such a young organization.

“We live in an awesome community. Ocala is a family. This town pulled together unbelievably,” says Judy, who’s lived here her entire life. “When you see others helping someone, businesses and people want to get on board and help. It’s contagious.”

Once Ocala United was committed to the project, there was the matter of logistics. For instance, getting precise measurements so materials could be ordered and specific items (countertops, cabinets, etc.) built. Unbeknownst to the Cassidys, Jenni’s mother, Julie, provided the Overfelts with a house key and frequently had to come up with a reason to get Jenni out of the house. The Cassidys had no clue that contractors had been secretly coming and going for months.

It took some creativity to get the family away from home for a week, but Ocala United had that covered, too. 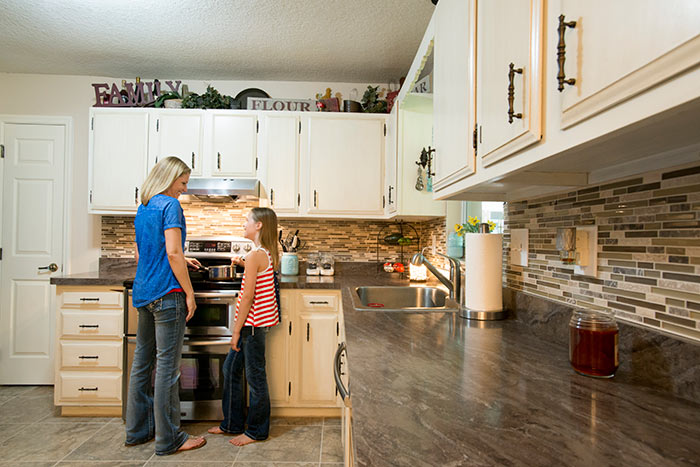 “We told Landon and Jenni that Ocala United had chosen them as the family they wanted to send on an all-expenses-paid Daytona Beach vacation,” explains Judy. “They said they thought another family would be more worthy, but Matt told them they were deserving because of how they serve their community.”

On August 2, as soon as the Cassidys left town, Ocala United showed up, along with a contractor, sub contractors and volunteers, and the makeover was underway. That they accomplished as much as they did in five days is nothing short of miraculous.

The 20 young people from Ocala United who participated approached the project as though it wasn’t in their own town. They stayed in donated rooms at a local hotel and didn’t keep their cell phones on. They might not have been in a third world country, but they put in the same amount of effort as if they’d been on the other side of the world.

Andrew Hurst, 17, a dual enrollment student at Forest High School and the College of Central Florida, took part in the makeover as a member of Ocala United. Andrew has participated in missions in other countries before but found this “trip” no less remarkable.

“I went to Nicaragua the last two summers for missions, and it was amazing but nothing quite like this. This was a different kind of amazing,” says Andrew. “We worked our tails off. That last day, Thursday, we worked until after midnight. We’d also done a lot of fundraisers beforehand, everything from a pancake breakfast to a three-day yard sale. The best part of the whole thing was ‘reveal day,’ to see how the community came together and how we impacted this family. They were so grateful for everything we did. For me, that put it over the top. It was the reward for all our hard work.”

Pulling off the magic of a makeover of this magnitude indeed required hard work. Installing countertops, cabinets, flooring, a bathroom sink and vanity, ceiling fans and lighting, a new front door, windows, a new AC/heating unit, dog kennel and redoing the concrete driveway took a team of experts and dedicated volunteers. Painting, bedding, dishes, cookware, enough new furniture to fill several rooms, home décor items, a new push mower, sod and mulch, the donation of a 2004 Mazda mini-van and lifetime garbage service were also part of the intensive project. Several area eateries donated meals every day to those who were working at the house.

At least one neighborhood teen got involved early in the week after walking over to find out what was going on. One of the volunteers offered him lunch, and he decided to pitch in and help out.

Although the Cassidy family drove their own vehicle to Daytona, Ocala United had to be sure they didn’t get back to Ocala before Friday morning. Because Jenni’s parents were in on the surprise, they offered to help. Judy Overfelt texted the Cassidys to let them know a limo would be arriving in Daytona to bring them home under the pretext that it would be a fun “first” for their kids. Jenni’s folks rode over in the limo so they could drive the family’s car back.

On the morning of Friday, August 7, the Cassidy family was due to arrive home between 11am and noon. Following in the tradition of the television show, a bus (in this case, a 37-foot RV) was parked to block the driveway of the house on NE 52nd Street. As the limo pulled up, the Cassidy family stared out the windows in shock at a crowd of close to 400 cheering people, some waving signs that declared, “There’s No Place Like Home,” “We Love the Cassidy Family” and “Welcome Home.”

And what a welcome it was.

The stunned family stepped out of the limo into an enthusiastic crowd shouting, “Move that bus! Move that bus!” As the RV pulled away from the front of the home, the Cassidys got the first view of their totally renovated home.

Walking through the house, they were overwhelmed at the abundance but especially at the attention to detail that included some very simple things, such as closet doors in 9-year-old Caroline’s bedroom, something that was missing before.

“We feel so humbled; it’s hard to even talk about it,” admits Jenni, who still gets emotional thinking about what happened to their family. “Not many people knew our situation. We’ve always been willing to help others but didn’t ever expect it would happen to us. This is the kind of thing that happens on TV, not in real life. It’s just so unbelievable; it’s really miraculous.

“My husband keeps saying they gave us the gift of time,” she adds. “It was so stressful having so much to do, both time-wise and money-wise. It would probably have taken us 15 years to have done this. We’ve already played basketball in the new driveway!

“You hear so many bad things about young people today, and then this happens and it gives you hope,” says Jenni. “It was so moving to know that complete strangers gave of their precious time and resources so selflessly. This was an act of generosity, love and kindness we could have never imagined. God truly worked through Ocala United, our community, local businesses, and I know there will be many treasures laid up in heaven for the love of Christ shown to my family. Landon and I really want to pay it forward. Nothing we can say can express our deepest, most sincere gratitude and appreciation. We are ever humbled at the outpouring of love into our family and can’t wait to see how God continues to use this for His glory. It’s the blessing of a lifetime.”

Ocala United is a non-profit 501(c)(3) local Christian youth ministry for middle school, high school and college students. It is not affiliated with any one church. Sunday evening meetings are held in Grace Place, an assembly room at St. John Lutheran Church. For more info, visit ocalaunited.us or facebook.com/ocalaunited. 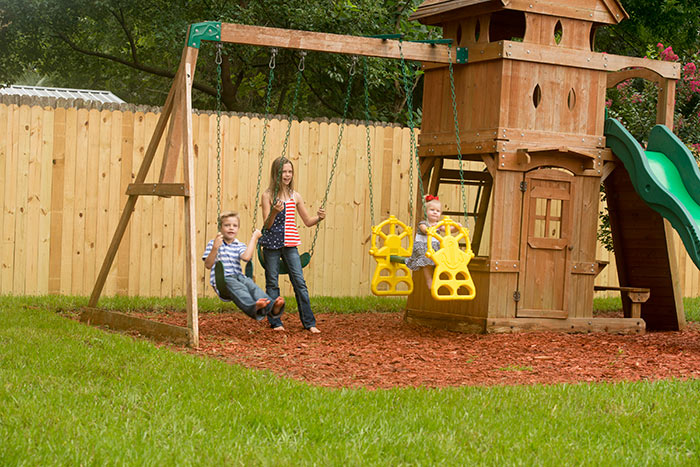 Thank You for Making this Makeover a Reality!

Ocala United would like to thank the following area businesses, organizations and individuals for their contributions in making this project such a heartwarming success: