Bruce Mozert could not have known when he showed up at Silver Springs 70 years ago, eager to make good on a freelance assignment to photograph Tarzan Finds a Son, that he would find a lifelong avocation. He also found a home. 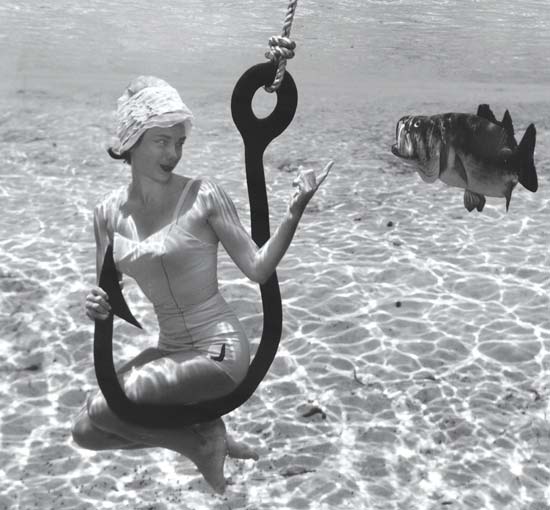 Bruce Mozert, though just 21, was anything but wet behind the ears when starting out at Silver Springs.

His sister, the famous female pinup artist Zoë Mozert, had launched him on his way by introducing him to Victor DePalma, then a top photographer for Life magazine before striking out on his own. Constantly on the move, Mozert used his trusty “Rollie” to photograph everything from football games and beauty pageants to the ill-fated Hindenburg moments before it burst into flames. His work was published in daily newspapers, like the New York Mirror, as well as Pic, Look, and Life magazines. 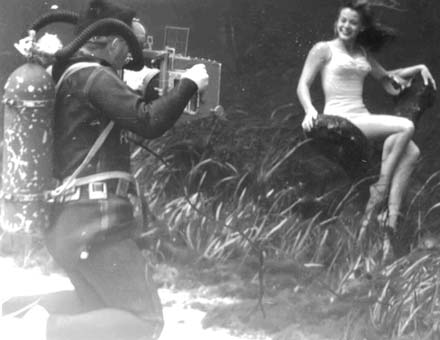 At his peak, Mozert’s photographs appeared on an average
of two magazine covers a month.
Photo by Bruce Mozert

As Mozert puts it, he “took to photography like a duck takes to water.” For the man generally considered the “grandfather of underwater photography,” that may be something of an understatement. On the scene at Silver Springs in 1938 to capture the third in the Tarzan series starring Johnny Weissmuller and Maureen O’Sullivan, Mozert was vexed to discover that the one shot he truly needed, Weissmuller swimming with “porpoise-like grace” in the springs’ crystal clear waters, was the one shot he couldn’t get. That’s because the only way to capture underwater sequences was in a submerged drum outfitted for the movie’s cameraman, and there wasn’t room enough in the rig for Mozert.

But, in what would become Mozert’s lifelong mantra, necessity proved to be the mother of invention. He got permission to nose around the park’s maintenance shop and cobbled together the world’s first underwater camera casing out of galvanized metal sheeting, an old inner tube, and rubber cement.

“When I showed up at the set the next morning, they all laughed at me,” he says. “But I just walked into the water and took my pictures.”

He ended up with black-and-white images so good that MGM snagged them for publicity stills, paying Mozert the princely sum of $12.

The rest, as they say, is history. 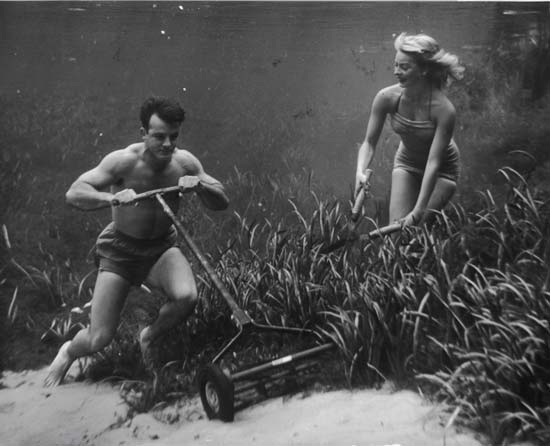 IN THE PRIMORDIAL days before Disney, Silver Springs became Florida’s premier tourist attraction thanks in large part to a public relations juggernaut that targeted snowbirds through release of thousands of publicity stills on the national wire services.

Mozert was part of an aggressive marketing machine that by the 1950s saw annual visitation of 800,000. During the park’s heyday, from the 1940s through the early 1970s, Mozert’s pioneering efforts resulted in the first underwater movie camera and the first underwater lighting system that is still used today.

“We developed a lot of things at Silver Springs,” Mozert says, “mostly out of necessity.”

At his peak, Mozert’s photographs appeared on an average of two magazine covers a month—including a Popular Science he spotted in Paris when then-Florida Gov. Ferris Bryant sent him to Europe on assignment. He worked on myriad films, including all three of the Creature from the Black Lagoon movies and The Yearling, and handled underwater camera work for ABC Sports, NBC’s Mike and the Mermaid, Fox News, CBS’ Sea Hunt, and Mercury Outboard Motors.

Along the way, he also took the bathing beauty “shot” seen round the world, helping catapult Jayne Mansfield to stardom. And he was the only photographer Esther Williams would allow to take her picture while filming Jupiter’s Darling at Silver Springs.

MORE THAN 50 of Mozert’s 8×10-inch glossies, as well as much of his equipment and other Silver Springs memorabilia, are on display through May 11 at the Appleton Museum of Art.

Dr. Leslie Hammond, the museum’s chief curator, said that Silver Springs: The Underwater World of Bruce Mozert is more than a collection of Florida kitsch.

“When seen in the context of history and art, not only is this group of images a contribution to the history of photography,” she says, “but also, weighing the technical difficulty of staging the scenes as well as the actors and their props, increases the level of appreciation of the works beyond their value as fun, old-time Florida scenes.”

That Mozert’s work would be seen as art, let alone fine art, came as a bit of a surprise to the shutterbug. Mozert said he is humbled by the exhibition, which has been in the works for about a year. It was brought to the museum’s attention by Gary Monroe, author of Silver Springs: The Underwater Photography of Bruce Mozert, a University Press of Florida publication due for release next month. 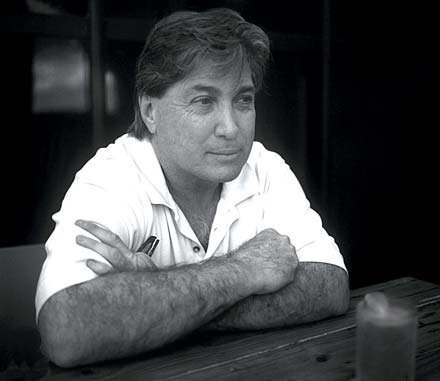 Gary Monroe
Photo Courtesy of The Appleton Museum of Art

“What’s remarkable, I think, is that he didn’t want to draw attention to himself as a photographer,” Monroe says. “He certainly didn’t consider himself an artist.”

Monroe, himself a photographer, said that for the last 10 years he has “felt compelled” to discover outsider, self-taught, or vernacular artists whose stories would otherwise be lost.

“As soon as I saw his photographs, my curiosity was more than piqued,” he says. “I recognized them as very special, not only for their historical context, but for aesthetics.”

Monroe was also astonished to learn that Mozert, now 91, still maintains a studio just down the street from the attraction. To select images for the book, Monroe spent months there, hunched over a 1950s light table, poring through thousands of negatives.

“It was like a treasure hunt,” Monroe says. “He was such a gifted craftsman. These were not self-conscious works of art.”

“Everything has a picture in it,” Mozert explains. “Just use your imagination.”

TO PROMOTE SILVER SPRINGS, Mozert knew his photographs had to be “snazzy” enough to grab attention from the press and would-be tourists. To accomplish that, he used shapely models performing everyday tasks such as smoking cigarettes or drinking Cokes, flipping burgers on a grill, playing golf, or cooling off in front of a new-fangled air conditioner—all underwater.

It has been five years since Mozert himself plied his trade under the waves. His final three shots, photographed at Rainbow River State Park, feature bikini-clad lovelies in poses reminiscent of his sister’s pinup work. The images, made when Mozert was 86, share space on his office walls along with faded newspaper clippings, framed letters of appreciation, a 50th wedding anniversary portrait he made of his parents, and a profusion of certificates and plaques that attest to a lifetime of community involvement and professional success.

Make no mistake, this is a working studio, and Mozert is the poster child for never slowing down. In the days just prior to his exhibit opening at the Appleton, he was in the darkroom printing images for Cynthia Graham’s upcoming book on Silver Springs, Paradise Park. Mozert is also tinkering on a remote-control boat equipped with an underwater camera so he can capture images he’s no longer able to photograph himself. In short, he doesn’t believe in retirement. 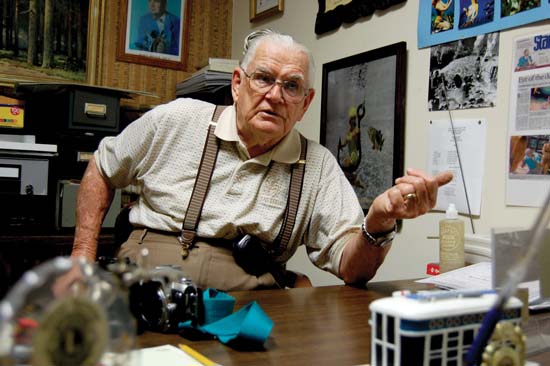 1. Famous Friends
Mozert got to know some of the biggest names in television and the silver screen while working on nearly two dozen movies and TV shows at Silver Springs. Of all the greats, he liked Lloyd Bridges best, describing him as a “nice guy.” Mozert was also fond of Rosemary Clooney and thought that Esther Williams could be “temperamental” but was ultimately “very cooperative.” The worst? Spencer Tracey.

2. What’s In A Name?
Mozert’s family name was originally “Motzar,” but his German grandfather decided to “Yankee it when he came through Ellis Island” and for a generation, the name was changed to “Moser” before it became Mozert.

3. A Kwik Sale
Venerated Ocala Realtor C.L. Dinkins Jr., Mozert’s brother-in-law, managed the photographer’s concession at Silver Springs for many years. Mozert, who had invested in a number of shopping centers in the area, eventually sold some properties to Dinkins that became the original Kwik King stores.

4. The Candy Man
Mozert has a life-long love of butterscotch candy.

5. The Buck Stops Here
When tourists headed out on a Glass Bottom Boat ride, Mozert was there to snap their photo, which he would then sell for $1. At its peak, his concession at Silver Springs sold an estimated 50,000 souvenir photos a year. At one point, the concession outsold the entire state in film sales, even Cypress Gardens.

Silver Springs: The Underwater World of Bruce Mozert
On display at the Appleton Museum of Art through May 11
(352) 236-2121 • www.silversprings.com