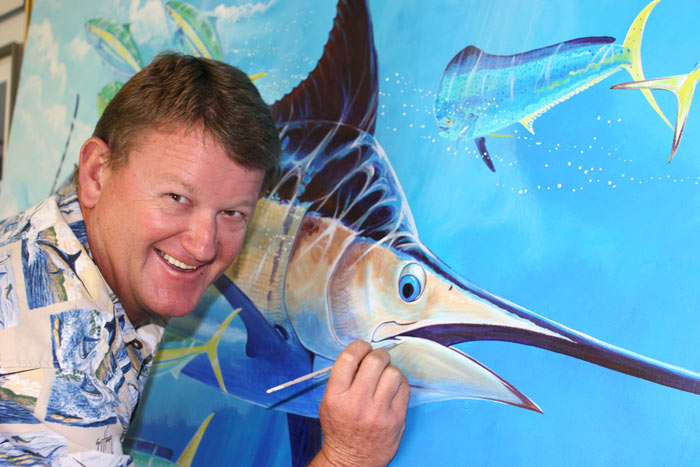 Standing in line at the grocery store the other day, I couldn’t help but smile. The man in front of me was wearing a Guy Harvey T-shirt.

That’s certainly not uncommon, especially here in Florida. But of all the images licensed for apparel use, this particular shirt happened to be “The Old Man and the Sea,” Harvey’s take on Ernest Hemingway’s classic fishing tale.

I’d just interviewed Harvey for this article, so I knew it was his original drawings based on Hemingway’s story that launched Harvey into the limelight as an artist.

The year was 1985. A marine biologist with a passion for conservation and a Ph.D. in fisheries management, Harvey had always loved to draw and paint, but his career was in science. Still, he carved out the time to create a series of 44 pen-and-ink drawings based on the literary classic, The Old Man and the Sea.

The response to this first public display of his artwork, which was exhibited at a gallery in Kingston, Jamaica, was so overwhelmingly positive that Harvey decided to devote his efforts to painting full time. Within just three years, Harvey’s custom artwork would be seen on a number of commercial endeavors, from posters to T-shirts and more.

By 1988, he was readily acknowledged as one of the top saltwater gamefish artists in the world.

“Watercolor is my favorite,” admits Harvey, who began painting when he was barely 5 years old. Those early images were, “pretty rudimentary,” he says, but his love of nature was already evident in the subject matter.

A 10th generation Jamaican of Scottish heritage, Guy Harvey was born in West Germany in 1955, thanks to his father’s military posting as a gunnery officer in the British Army. Harvey grew up fishing and diving in Jamaica, developing a love and respect for the sea and marine life that became as natural as breathing.

He attended English boarding school and graduated from Aberdeen University in Scotland.

Although Harvey had been drawing and painting since childhood, recreating many of the underwater scenes he’d witnessed firsthand, he was determined to pursue a career in marine biology. Grateful for the experience and knowledge gained during those years, he now applies that expertise to his art and to his zeal for protecting ocean life.

“I started as a fish illustrator working in pen-and-ink, which is a very precise and unforgiving media, but I like it. I do a lot of cross-hatching and stippling, which is very effective,” notes Harvey, who never received any formal instruction. “My training came from the need to study animals as a marine scientist and to record them accurately through drawing. My knowledge of fish anatomy and habitat all comes from my background as a scientist.”

Harvey’s love of the sea has taken him on diving expeditions around the globe, from Central and South America to Magdalena Bay off the coast of Mexico, to the Portuguese island of Madeira and even the famed Great Barrier Reef in Australia.

A man of many talents and passions, Harvey is a marine biologist, diver, photographer, angler and world-renowned marine wildlife artist, but he’s perhaps most proud to be recognized as a marine conservationist. In 1999, he founded the Guy Harvey Research Institute (GHRI) at Nova’s Oceanographic Center in co-operation with Nova Southeastern University in Fort Lauderdale.

“I basically gave up my academic career to go into art full time, but once the art was going well, I formed the Guy Harvey Research Institute,” he notes. “I wanted to put a portion of the art proceeds into academic research.”

The Institute conducts research on all manner of things related to fish, with specific research into sharks and stingrays—both ecology and conservation—as well as design and monitoring of artificial reefs.

“We have multiple interests, but a lot of that interest concerns sharks and a variety of different species,” says Harvey, who often speaks on ocean conservation at universities and other venues. “They are so rapidly being exploited, and their numbers are very low in some places. We need to be more proactive in their conservation. The data we generate on migration, reproduction and numbers is critical to stemming the cycle of over-exploitation and endangerment of many species. We have to embrace science to make any forward progress; nothing comes easily or quickly, but we are seeing progress. Without data, you’re just guessing.

“This is where the science and research work is so important,” he explains. “Education is secondary to that because you can only educate people once you know what you’re talking about. Data collection is a primary focus, and if we can’t do it ourselves, we team up with others who can. We often use expeditions to make educational documentaries about the animals. I derive a lot of inspiration from being in their company. They’re very critical to my productive process.”

The Guy Harvey Research Institute has produced more than 80 peer-reviewed scientific papers. Harvey is understandably proud of this fact because, in the world of academia, that is how progress is judged.

As a way to “help ensure that future generations will enjoy and benefit from a naturally balanced ocean ecosystem where fish and other marine wildlife flourish,” in 2007, Harvey founded the Guy Harvey Ocean Foundation.

With an eye toward conservation and management practices that will help sustain marine environments, the foundation funds scientific research and educational programs. Large pelagic fish, such as sharks, billfish and tuna, are prime targets of conservation.

Not surprisingly, those big fish are also Harvey’s favorite subjects when it comes to art.

“They’re majestic and imposing. Many of them—like the big billfish and tunas—are also very colorful. I like to paint predator and prey interaction scenes because there’s some story-telling going on,” says Harvey who paints daily at his gallery on Grand Cayman and also at the island home he shares with wife, Gillian, and their children, Jessica and Alex.

Realism is exactly what readers get to see in Harvey’s painting, “Touché,” showcased on this month’s cover of Ocala Style. This depiction of a sea turtle with a sailfish comes from first-hand experience, as does the vast majority of his artwork. The inspiration for this particular painting came from a diving outing in the Gulf of Mexico off the northern coast of the Yucatan Peninsula.

“The sailfish chase the bait fish—in this case, jacks, chubs, dolphin fish and rainbow runners—which are hiding under the turtle for protection,” notes Harvey. “I’ve witnessed this many times in different places and recreated it here.”

One might think Harvey is against fishing, given his strong views on conservation, but that’s not the case. An angler himself, he is a vocal advocate of responsible fishing—both commercial and recreational—and supports “catch-and-release” practices.

“There’s nothing wrong with fishing or with development, but it must be done in a sustainable way so that the marine environment will last forever,” he emphasizes.

Harvey maintains his art studio and home in Grand Cayman, but his connection with the Ocala area goes back, in his words, “a long ways.”

He’d already become friends with Charlie Forman when he founded the Guy Harvey Research Institute in co-operation with Nova Southeastern University. Forman is a lawyer and keen fisherman from Ft. Lauderdale, whose family owned a large portion of farmland where Nova Southeastern University is now located. Forman also had ties to Ocala, which led Harvey to visit there for the first time in 1987.

Enter Tom Ingram, local waterskiing fanatic andchief executive officer of Gateway Bank of Central Florida, who happens to have a passion for the ocean and scuba diving in Grand Cayman.

“Six years ago when I was in Grand Cayman, I walked into Guy’s studio and there he was painting,” recalls Ingram. “I introduced myself and told him we were building a gallery in our bank. I said we’d love to sell his artwork and help his ocean foundation. He was familiar with Ocala and already had some contacts here. He’d never been to a football game, so we got him here for a Gator homecoming a couple years later.”

The first art exhibit and sale of Harvey’s work at Gateway Bank took place in November 2009. That event raised about $25,000 for his foundation.

Gateway Bank hosted another fundraising art exhibit in May 2014. That mixed media exhibit featured 38 pieces of Harvey’s work, including 17 originals. All displayed artwork was available for purchase by the public, and the sales brought in close to $30,000, again benefiting the Guy Harvey Ocean Foundation.

“We displayed his work for several months before the actual event,” recalls Ingram. “Guy appeared at the event where he signed his art and gave autographs.”

“Tom Ingram has been very active in helping us raise money,” acknowledges Harvey. “We’re always in touch and have done a lot of fundraising activities together.”

Last fall, Gateway Bank launched the exclusive Guy Harvey Legacy Checking Account as another way to raise awareness and benefit important marine research and education. In addition to the numerous perks that come with the account, patrons can feel good about the fact that Gateway Bank will make a $50 donation to the Guy Harvey Ocean Foundation for every new account opened. 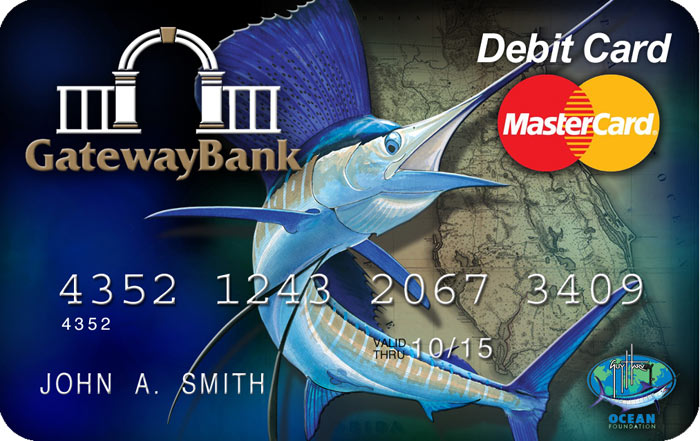 Yhere’s no doubt Guy Harvey is successfully pursuing his greatest passions. He hasn’t even hit his sixth decade (he’ll turn 60 this next September), and he’s already made more impact than most people do in a lifetime.

With his artwork known around the world and the establishment of his Guy Harvey Research Institute and Guy Harvey Ocean Foundation, he has ensured a lasting legacy.

“It’s all about helping people learn more about the marine environment so they appreciate it and conserve it,” says Harvey, who hopes his art has more than aesthetic value to those who buy it. “People want to collect art because it’s pleasing, but also in purchasing that art, they’re helping with our education and research efforts. They’re participating in the process of learning more about the marine environment.”

2004: NOGI Award; the oldest and most prestigious award in the diving industry, given to artists, scientists, educators and other distinguished individuals

2009: Wyland ICON Award; recognizes the achievements of individuals who exemplify the spirit of the adventurous ocean and inspires others to do the same through their art, research or diving

2010: International Swimming Hall of Fame Gold Medallion Award; presented each year to a former competitive swimmer for his or her national or international significant achievements in the field of science, entertainment, art, business, education or government

2010: The Jamaica Committee Award of Excellence; presented to Guy Harvey for hands-on commitment to marine sciences, his inspired promotion of the marine environment and his philanthropy