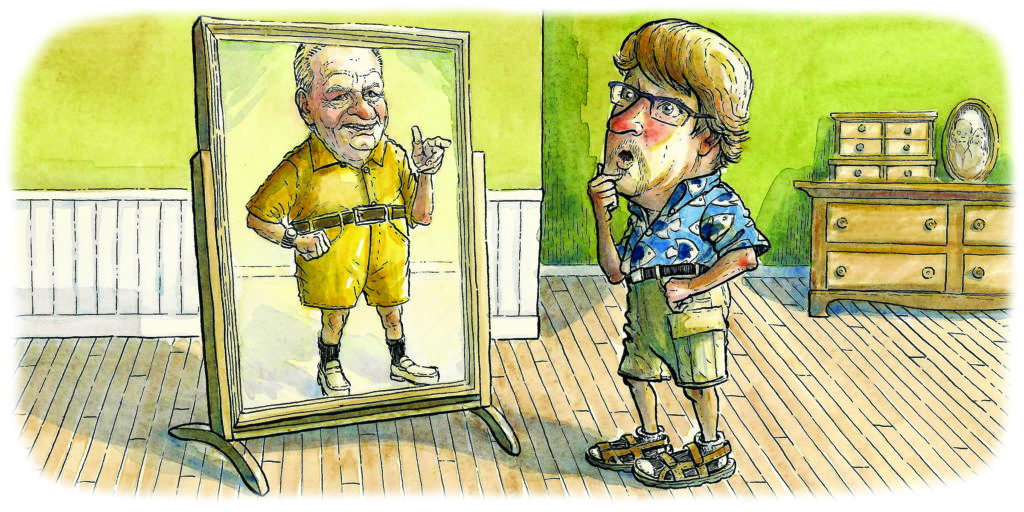 Every so often, we called Granddad “Mellow Yellow.”

He wore his mustard yellow shorts pulled up to his belly, his shirt one shade short of aging banana. His socks were black, and his shoes were off-white business casual from the Eckerd Drugs Collection—aisle 16, bottom rack.

He was a retired dentist who could afford better shoes, but Granddad strode comfortably into retirement with a clear fashion mantra: Ah, to hell with it.

We laughed. Couldn’t help it. “Daddy!” my mom would say, “you …” She stopped because the clothes often left her speechless. I love those memories.

Then, several weeks ago, I realized I was creating the exact same memories for our daughters.

I was getting ready to take Caroline to school when I looked down and saw black socks and sandals. Cargo shorts flapped carelessly under a loud shirt.

Worst part: The epiphany should have hit me harder.

A savvy man would have shrieked and, at the very least, ditched the socks. That alone would have trimmed 10 years off the ensemble. Instead, I chuckled and thought, “Ah, to hell with it!”

Recently, I searched for court shoes to aid my pathetic return to tennis. I wanted the shoes from my last bout with the game—white Stan Smiths from Adidas.

Four frustrated clerks later, I secured white shoes with an oversize tongue that lapped my whiter ankles. I was thrilled. Look out tennis courts, Dave is back. And he looks great!

Once home, I unpacked the shoes as if removing a precious stone from an ancient crate.

“Those look like shoes every middle school boy wears,” said my 21-year-old daughter Katie. It was said in the same spirit we used for Granddad’s Mellow Yellow ensemble.

Soon thereafter, I bought a sporty shirt in a thrift store. It was adorned with colorful fish, and—get this—it was $3. So impressed was I that I asked the clerk at checkout, “So what’s wrong with it? Is it cursed or something?”

Her hesitation was yet another clue that my choices were straight out of Eckerd Drugs. So, I put the shirt to the ultimate test, posting a picture on Facebook and asking for input.

Reactions were as varied as they were passionate.

Under “Love it!” was a green emoji fighting back vomit.

“You got ripped off.”

The most telling comments came from the Schlenker elder statesmen.

“You are old,” noted my older brother, Russ. “You can wear anything you want.”

And there it was. Truth. I’ve hit that age when I simply don’t care. Comfort rules. At least I’m wearing pants.

Heck, I’ve already got the girl. I guess my only concern should be not embarrassing our daughters, and, frankly, that ship sailed long ago.

Granddad, once again, thanks for the wisdom. As my shorts steadily creep north, I think of you. May your memory forever haunt aisle 16.