You’ve read all the books, taken the classes and downloaded every app. You, Mom and Dad, are ready for whatever Baby has up its tiny sleeves. These parents thought so, too. Hear from two local families on how their recent additions changed their schedules, homes and perspectives. 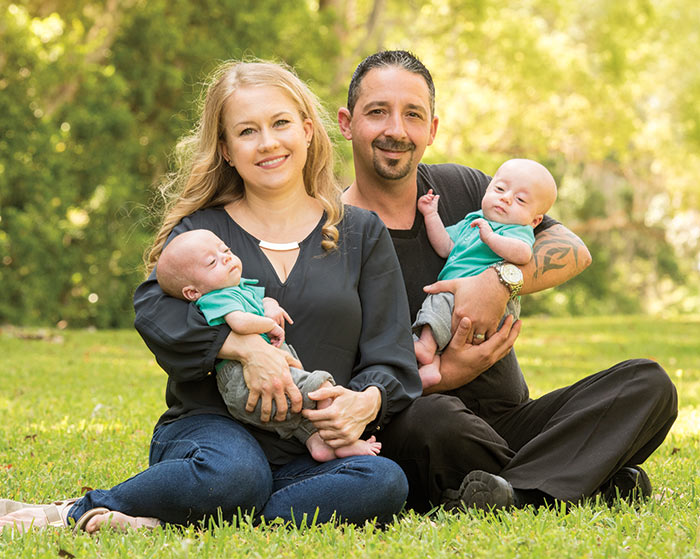 Rarely are twins expected. That means the reveal can lead to some unnerving situations, which it did for new mom Angela Russo and her husband, Joseph. When she woke up one morning with pains, Joseph rushed her to the hospital. The couple hoped it wasn’t a miscarriage or serious complication. It wasn’t.

“We went back for ultrasounds, and the nurse was like, ‘Everything looks fine with you, and both babies seem to be fine.’ And I was like, ‘…what did you just say?’” Angela recalls.

The nurse began wheeling Angela back to the room where her husband was waiting. Angela pleaded with the nurse to tell her husband about the double trouble discovery because she didn’t think she could, but instead, she wheeled Angela into the room and shut the door. To say Joseph was shocked would be an understatement.

Angela’s pregnancy was higher risk due to the twins’ shared placenta (monochorionic-diamniotic, or MoDi for short). Her C-section was scheduled for 37 weeks, an ideal time before the babies get large enough they chance cutting off each other’s nutrient and blood supplies.

Doctors estimated incorrectly—it was closer to 35 weeks when the twins were delivered prematurely. Dominic wasn’t breathing well and had to be taken by ambulance to Shands. Noah wasn’t breathing at all and, at minutes old, took his first helicopter ride to Shands’ NICU, too.

“Hearing the helicopter leave the hospital knowing that your child is on it is just surreal. That’s when they upped my medicine. I’d never seen my husband cry, much less cry that hard,” Angela recalls. She didn’t see her children until three days later when she was finally discharged from Munroe.

“We spent the first 15 days of their life in the NICU. There were 11 other sets of twins, so having multiples, they don’t tell you the NICU is a possibility.” Had she understood that likelihood, she says she’d have opted to deliver at Shands to begin with.

Now a little over two months into motherhood, Angela has learned an immense amount of information and multiple-mom hacks, like how to feed twins.

These parents have stations in each room consisting of bouncers, swings, Boppy pillows or other safe places to feed both brothers or put one down while burping the other. Each station is equipped with a basket of essentials like pacifiers, wipes and aspirators. Why? Because when you’re feeding two hungry tikes, getting up is tough.

“It’s all about controlling chaos,” Angela chuckles. “I have a station in the living room, in my bedroom and in the nursery. I’m just now getting comfortable doing two at the same time. Now I just tandem breastfeed, which is like ‘I am mother hear me roar.’”

Angela says she gets two to three hours of sleep each night with feedings every three hours, which take about two hours to complete with feeding, burping and changing duties doubled. Dominic and Noah rifle through 16 diapers daily, sometimes extra for bonus poops. Speaking of, she says Gripe Water is the best solution for her boys’ gas pains.

One of her main lessons was resisting the urge to take care of each baby individually, instead caring for them together to have breaks while they sleep.

The babies have also changed the way Angela and Joseph say ‘I love you’: by offering to handle baby care while the other naps and enjoying little moments together.

“I think the divorce rate for multiple parents is around 75 percent. I don’t want to get into a routine of just maintenance. It’s having an understanding partner and having a present partner,” says Angela.

Mostly she and Joseph are about doing their best and just giving it, as Angela says, “the old college try,” letting herself experience motherly panic but understanding it’s just part of the job.

“Let me tell you about all the plans you think you have. ‘I’m not going to use pacifiers; I’m only going to breastfeed.’ Reality hits, and now I have binkies in every corner of the house. I’m surprised I don’t have one hanging off my neck,” she laughs. “So far I’ve Googled this entire motherhood. I’m sure my pediatrician’s going to drop us. I’ve shown up four times and called like 17. Now I call and they say, ‘Is this the Russo mom?’” 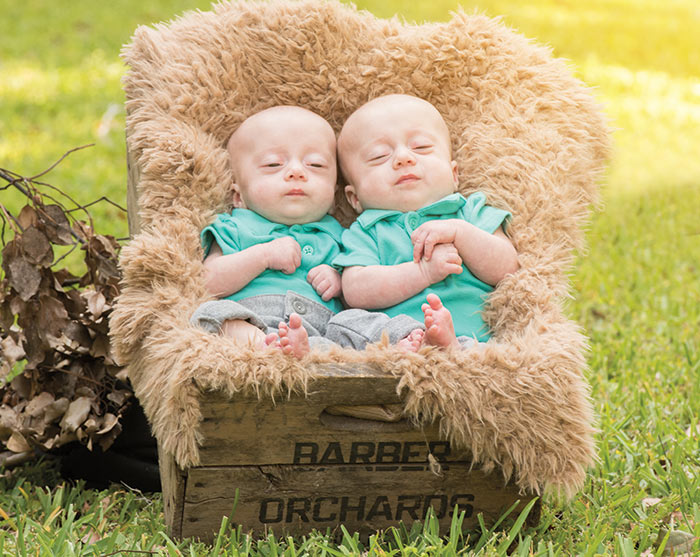 More than anything, after their rough entrance, she enjoys seeing her boys’ bond and develop.

“They’ll hold each other’s arms and hands without even realizing it. It’s amazing to see them learn. Every day is something new. It humbles you. Like sunshine coming in, all of a sudden it’s bright out, and they’re like, ‘What’s that light? What’s that sound?’ When we go for a walk I can’t wait for them to really get to look at things like trees, look at grass. I can’t wait for that.” 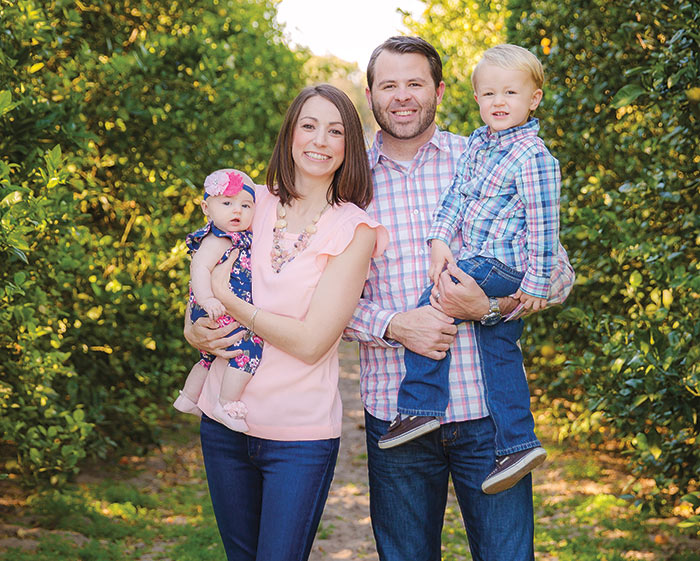 Kaden, 2 and a half years old, and Kenley, 5 months

Two children under 3 for two working parents makes for full schedules. Kevin works at Duke Energy on a rotating schedule, and Kendra works part-time as a speech therapist, but they make it work smoothly.

“When I get home from work, usually if she’s cooking, Kenley will sit in her little bouncer and I’ll take Kaden outside to play just so he’s not in here trying to distract her,” says Kevin.

“I’m lucky in that he’s very involved, so it’s pretty evenly split, and he’s home during the week so he gets that time with them, too, and that’s really nice,” Kendra adds.

These two are only five months into balancing life with a toddler and a baby under one year, but they’re tackling it one day at a time and working out systems that fit their family for dinnertime, baths and bed.

“She sits in her bouncer while we eat, but she gets fussy, so usually one of us eats and the other holds her, so we have to switch who gets to eat,” says Kendra. “He used to give all the baths. Now he does Kaden and I do the baby, so we kind of split everything like that.”

“By the time he’s ready for bed, she’s ready to go to bed, and lately she’s wanting Mom to nurse to go to sleep, so she’s with her and I’m always putting him down,” Kevin adds.

Kendra says an additional challenge is splitting time between two, like during feedings when Kaden wants to be held, too.

Kendra says the Ergobaby carrier and California Baby soap are some of their favorite products, but Bumbos, in their experience, were a total bust. When asked if they get any unsolicited parenting advice, they said not anymore (since they seemed to do fine the first go ‘round).

“We do get a lot of ‘oh, a boy and a girl, you can be done!’ And we are done, but that’s kind of assuming,” Kendra explains.

They were also very intentional about preparing Kaden to become a big brother in some simple but genius ways.

“He noticed it early. As soon as my belly started changing, he was like, ‘Baby?’” Kendra recalls.

“We tried to explain it,” says Kevin. “You know, he’s not going to understand exactly what’s going on, but we tried to read books to him and talk about her all the time and tell him she’s coming soon.”

Then came the day when Kaden went to the hospital to meet Kenley.

“We had bought some gifts from Kenley to Kaden so he had a present from the baby,” Kendra says, which seems like the perfect way to make a good first impression on baby’s behalf.

Now Mom and Dad delight in seeing their children move through milestones and get closer every day.

“She can’t sit up by herself, but she can almost lift herself up if she’s sitting in your lap,” Kevin says. “You can connect with her more. She smiles, and she notices that you’re in the room.”

“And with Kaden, his communication is getting more complex. His sentences are more complete, so it’s fun to communicate that way. He’s becoming a big boy,” Kendra smiles. “The other morning he was trying to help put on her shoes. He’s just really loving. When she’s in the Jumperoo, he’ll talk to her and she’ll laugh. It’s been really cool to see their relationship start to form.”

Fortunately, with one pregnancy and infancy down, the nagging fear of “are we doing this right?” has mostly dissipated for this pair.

“For me, a lot of the doubts of having an infant were gone,” Kevin says. “It feels like since we’ve been through it one time, it’s not as hard with her.”

“You don’t have time to be as worried,” Kendra laughs.

With their family settling into new routines, Kevin sums up their parenting philosophy simply:

“Everything you read kind of goes out the window. Whatever comes up, you just deal with it. There’s really no set ways to raise a kid. I think it’s just however you decide to do it. There’s not a wrong way, just different.”