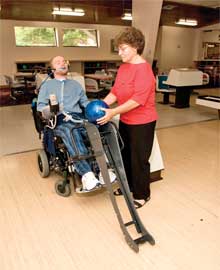 Bill Miller’s bowling average is in the triple digits. You may not think that’s something to brag about until you discover that Bill is in a wheelchair. He’s a C1-2 quadriplegic. Like the late actor Christopher Reeve, Bill can’t move or breathe on his own. He uses a power wheelchair for mobility.

A resident of Leesburg since he was a child, Bill graduated from Leesburg High School. He was ready to begin his senior year at the University of Florida in August 1997 when he tripped over some exercise equipment in his bedroom and fell, an event that changed his life forever.

After months of hospitalization and rehabilitation, Bill came home, armed with a positive attitude and a desire to be involved in as much activity as he could handle from his wheelchair.

Bill lives with his dad, Jim, a commercial realtor, and stepmom, Donna, who is a Lake County judge. While talking with court volunteer Claude Diguere, Donna shared her disappointment that her stepson could no longer bowl, which was one of his favorite activities prior to his accident. A retired engineer, Claude decided to see if he could find a way to fulfill Donna’s wish for Bill.

Claude met Bill, and the two men instantly bonded. Their initial idea produced a device that fit over the wheelchair’s footrests and allowed the operator to “push” the ball down the alley. While it did work, the speed of the ball depended solely on the speed of wheelchair, which wasn’t very fast with Bill’s “sip and puff” method.

Putting their heads together again, Bill and Claude began looking at a ramp-style apparatus, which would give the ball momentum and take the pressure of creating more speed off the chair operator.

The two men refined their invention and created the IKAN Bowler, which has since been approved by the American Bowling Congress and the Women’s International Bowling Congress. The name is derived from the Greek word “ikano,” which means to enable.

“Our goal is to get people back into the game of life,” Bill says. “Anyone who can operate a chair should be able to bowl. It’s incredible to share the joy and empowerment with those who are severely physically limited in what they can do.”

The beauty of the IKAN Bowler is that it allows any power wheelchair user the freedom of bowling that mimics the standard bowler. There is one difference – the IKAN Bowler is allowed to use a caddy to position the ball and align it based on the bowler’s directions. When that’s done, the bowler is able to control the speed, set the direction and execute the ball’s release by moving the wheelchair.

The ramp has a universal mount that will fit any power wheelchair. Eight people in Lake County are using the device and they now have their own team called the “Quad Squad.” They bowl together on the second and fourth Saturdays of each month and hope to encourage others to join them. Bill says they carry an extra IKAN Bowler with them for guests.

“My best score with my sip-and-puff driving is 202,” Bill says. “The wheelchair bowler has to develop skills and strategies for raising scores just like an able-bodied person.

“It’s a lot of fun. If I can bowl, everybody ought to be able to bowl,” he adds.

With the help of financing from family and friends, Bill and Claude opened their own company to manufacture the IKAN Bowler devices. In 2004, the National Multiple Sclerosis Society recognized Bill and Claude with its prestigious Da Vinci Award for outstanding design innovation aimed at helping the disabled overcome barriers.

Though Bill’s life has a certain routine, his can-do attitude keeps him busy and searching for new ideas and projects. An avid Gator fan, he has signature items from the University of Florida all over his room and seldom misses watching a game.

Bill wrote movie reviews for a local newspaper for a while, but now he’s focusing his energy on getting his bachelor’s degree from online classes through UF. He plans to continue his education until he gets his masters degree and then teach at the college level.

“I’d like to teach economics or math. I’ve always wanted to teach people who are not mathematically inclined, anything from basic math to algebra. I think I can present it in a way that will make more sense to them,” Bill says. “I believe I can give them the tools they need to solve the problems.”

He also does presentations at Anthony House, an organization dedicated to helping the homeless. He does mini-workshops with the men, helping them understand and develop a new perspective on life.

“I enjoy it, and I get as much from it as they do,” he says. “The question-and-answer period is my favorite part.”

Bill has a busy schedule, but he makes an effort to make every interaction he has with others a positive experience.

“I feel blessed in so many ways,” Bill explains. “I just want to help other people get out there and experience life. My ninth-grade English teacher once said if you hang everybody’s problems out on a line, you’d end up taking your own because they’re usually easier to handle than someone else’s. I have to say I agree with that.”

Visit Bill’s personal website at lookmomnohands.net, where he speaks openly and frankly about his life, or ask him questions on his blog at powerwheelchairusers.blogspot.com. The company that Bill and Claude created is called Manufacturing Genuine Thrills, and the website is ikanbowler.com.