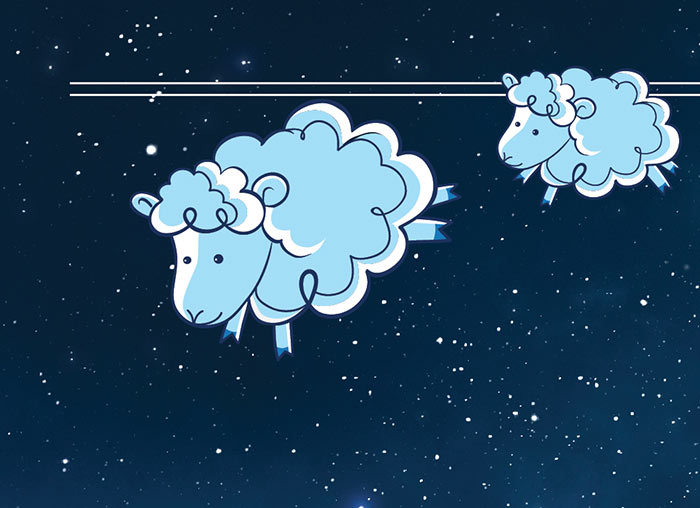 Crashing. Calling it a night. Getting some shut-eye. Hitting the hay. Hitting the sack. Catching some ZZZs.Whatever you call it, sleeping takes up roughly one-third of your life. Or at least, it should.

Unfortunately, about 70 million Americans suffer from sleep disorders. Gallup polls reveal that 40 percent of Americans get less than the recommended amount of sleep for their age range.

“Lack of sufficient sleep has numerous adverse consequences,” says Richard B. Berry, M.D., professor of medicine at the University of Florida and medical director of the UF Health Sleep Center. “A recent consensus statement of the American Academy of Sleep Medicine and Sleep Research Society recommended that the average adult should sleep seven or more hours per night to promote optimal health. Sleeping less than seven hours increases the risk of obesity, depression and heart disease and can impair performance and weaken the immune system.”

It’s about much more than just lying awake at 3am staring at the ceiling. Sleep deficits have been linked with vehicle crashes, medical and other occupational errors, even industrial disasters.

According to the National Highway Traffic Safety Administration, driver fatigue causes an estimated 100,000 motor vehicle accidents and 1,550 deaths annually. You might never get behind the wheel after drinking, but what about driving while exhausted? One study showed that people who drove after staying awake for 17 to 19 hours performed worse than drivers with a blood alcohol level of 0.5 percent.

“Lack of sufficient sleep can increase the risk of accidents. Driving sleepy can be just as dangerous as driving drunk,” notes Dr. Berry.

Gallup polls found that the average American today gets 6.8 hours of sleep per night. That’s a whole hour less than the average back in 1942. Forget the average. Plenty of Americans are getting by (or trying to) on less than six hours of sleep. Not a good plan. Research shows that when you average just four hours of sleep nightly, your brain responds as though you haven’t slept at all for three nights in a row. 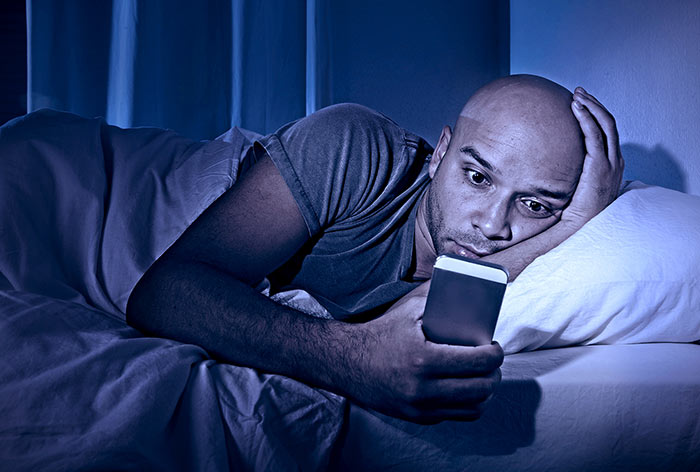 Step away from your smartphone, and put down that tablet. At least when it’s bedtime.

Scientific studies have documented that exposure to light promotes wakefulness and interferes with the natural 24-hour cycle of sleeping and waking, also known as the “circadian rhythm.” You might think this just pertains to natural outdoor light, but you’d be wrong. Our favorite handheld electronic devices emit enough light to cause our brains to remain alert and stay awake.

Many people—especially children, teens and young adults—have their phones with them 24/7. Additional electronics exposure, from computers to television, also have a negative impact on sleep.

Research has shown that kids who use electronic media to relax at night get fewer hours of sleep per week and report more daytime sleepiness. Also, adolescents with a bedroom television have more trouble falling asleep and experience shorter total sleep time, and teens who text and email after lights outs—even once a week—have dramatically increased daytime sleepiness.

How Much Sleep DoYou Need?

An expert panel of 18 leading scientists and researchers conducted a two-year study for the National Sleep Foundation to update former guidelines for sleep at various ages.

Here’s a summary of the new official recommendations:

All Sleep is Not the Same

Even if you spend an adequate number of hours in bed, you might not be getting quality sleep. That’s because all sleep is not created equal.

Stage I sleep is just dozing, which, although pleasant, doesn’t do much to restore your body. What you need is Stage II and Stage III sleep.

Stage II is also known as “rapid eye movement” or REM sleep. This restorative middle period of sleep is the phase during which you dream.

Move on to Stage III sleep and you’re in slow-wave, deep, dreamless sleep, which is the most restorative phase for your body.

There are dozens of sleep/wake disorders. We’ll take a look at five of the most common.

If you have difficulty falling asleep or staying asleep or you wake up too early and can’t fall back asleep, you may have insomnia, which is the most common sleep disorder. The problem tends to build on itself; the more trouble you have sleeping, the more frustrated you become and that makes it even harder to get enough sleep. Insomnia can be occasional or chronic. More women than men are affected, with approximately four in 10 adults reporting cases of insomnia.

Experts say poor sleep and lifestyle habits, as well as working second and third shifts, can contribute to insomnia. Other habits that can cause insomnia include irregular bed times, poor sleeping environment, lack of exercise and use of electronic devices in the bedroom or the bed itself. Alcohol and drugs (including some over-the-counter cold medicines and diet pills) can also be contributing factors.

Conditions such as stress, depression, bipolar disorder, enlarged prostate gland (men), overactive thyroid gland and nerve pain and/or arthritis may also cause insomnia. Depression and insomnia are strongly linked. One study of 10,000 people in 2007 revealed that the risk of developing depression was five times more likely for persons with insomnia.

Your doctor will perform a physical examination and review conditions or medications that may be causing the problem. He or she may recommend a change in sleep habits to improve your sleep “hygiene.” Some patients will benefit from seeing a psychiatrist or another mental health care provider. Cognitive-behavioral therapy can help when insomnia is caused by stress, anxiety or depression. In some cases, medication may be prescribed for a period of time.

In this disorder, breathing actually stops and starts multiple times while the person is asleep. There are two different types of sleep apnea. With obstructive sleep apnea, the most common type, breathing is interrupted because of trouble with the airway, typically blockage or narrowing. What often happens is that the soft tissue at the back of the throat collapses during sleep. With central sleep apnea, the brain temporarily stops signaling the muscles that are in charge of breathing.

Central sleep apnea may be caused by obesity, heart failure, narcotic painkillers, Parkinson’s disease and brainstem problems (including stroke, brain infections and issues affecting the cervical spine). Severe sleep apnea (when your breathing is affected more than 31 times an hour) doesn’t improve without treatment. Severe sleep apnea can put you at greater risk for heart disease, stroke and high blood pressure, so it’s important to see your doctor if you suspect a problem.

“Although loud snoring, daytime sleepiness, obesity and the male gender are characteristic of persons with obstructive sleep apnea, many thin individuals and women also have this problem,” says Dr. Berry. “Women often report fatigue, frequent awakenings, depression and morning headache. Frequent trips to the bathroom at night, rather than loud snoring, are often reported by elderly patients.”

In addition to a physical exam, tests may be necessary to determine any underlying medical causes for sleep apnea. These tests may include echocardiogram, lung function tests and MRI of the neck or spine. A sleep study can confirm the diagnosis. The prognosis depends upon the cause of the sleep apnea. Many patients benefit from sleep devices that aid breathing, such as nasal continuous positive airway pressure (CPAP), bilevel positive airway pressure (BiPAP) or adaptive servo-ventilation (ASV). In some cases, a doctor may use medication to stimulate breathing, and/or oxygen treatment.

For sufferers of restless legs syndrome (RLS), the feeling is indescribably frustrating. About to fall asleep, they suddenly have the feeling of burning, tingling, itching or aching in their lower legs and an overwhelming urge to move their legs. Walking helps relieve the unpleasant sensations, which may last for an hour or longer. RLS can make travel or sitting in public places, such as classrooms or meetings, not to mention falling asleep, incredibly challenging.

Although the exact cause of RLS is unknown, research suggests it may be connected to a problem with the brain chemical dopamine, which helps muscle movement. People with chronic kidney disease, diabetes, Parkinson’s disease, iron deficiency, peripheral neuropathy and multiple sclerosis tend to have more problems with RLS. Periods of emotional stress can cause symptoms to worsen. It can also occur during pregnancy.

Roughly 2 to 5 percent of adults are affected by RLS, and it’s believed to have a genetic component. Although the disorder can occur in childhood, most people diagnosed are middle-aged adults and older. Women are more commonly affected, and many women who experience symptoms during pregnancy find RLS disappears without treatment shortly after they give birth.

Although there’s no specific test for RLS, your doctor will conduct a physical exam and may do blood tests to rule out other conditions. Although the disorder doesn’t have a cure, symptoms can be relieved by medications. Regular exercise and avoiding caffeine and alcohol may reduce symptoms.

More common in children, sleep terrors can also affect adults. Also known as “night terrors,” these episodes are characterized by periods of intense fear, screaming and flailing while sleeping and may be accompanied by sleepwalking. Episodes can last from just a few seconds or minutes or even longer. It is difficult to awaken someone experiencing sleep terrors, and if you succeed, they will likely be confused.

Sleep terrors may be connected with sleep apnea, RLS, migraines, head injuries and certain medications. The disorder also tends to run in families. Most children who experience sleep terrors are between the ages of 4 and 12. In most cases, a child will outgrow the disorder by their teens.

If sleep terrors are only an occasional occurrence, most experts say there’s no cause for concern. However, if they become frequent, lead to dangerous behavior, follow a consistent pattern each episode or persist beyond the teen years, you’ll want to see a doctor. If stress is a contributing factor, therapy or counseling may help. Medication isn’t usually used to treat sleep terrors in children.

Extreme sleepiness and intermittent, uncontrollable episodes of falling asleep during the day are the hallmarks of narcolepsy, a neurological disorder affecting the body’s control of sleep and wakefulness. People with the disorder experience abrupt “sleep attacks” that last from a few seconds to a few minutes. Obviously, this can be disastrous if it occurs when you are driving or at work. In some cases, the person has sudden muscle weakness and may even laugh.

Experts aren’t sure what causes narcolepsy, but research has found that certain genes are linked to narcolepsy, which can run in families. Blood tests have shown many of those with the disorder have low levels of hypocretin, a brain chemical that helps people stay awake. Symptoms tend to occur for the first time when the person is between the ages of 15 to 30. Some people with narcolepsy also have other underlying sleep disorders.

A physical exam should be done by your doctor, who may prescribe stimulant medication to help you stay awake during the day. Antidepressant medicines are sometimes used when symptoms are severe. Counseling may be recommended. Because there’s no known cure for narcolepsy, you’ll need to follow your doctor’s advice to control symptoms and pay special attention to sleep hygiene.