Approximately 7.3 million Americans are vegetarians and another 22.8 million more follow a “vegetarian-inclined” diet. One million vegetarians take their diet and lifestyle one step further and are vegans, meaning they consume no animal products whatsoever. Even if you aren’t vegetarian or vegan but are simply looking for a way to limit your ground beef intake for health reasons—there are tasty alternatives to that burger. 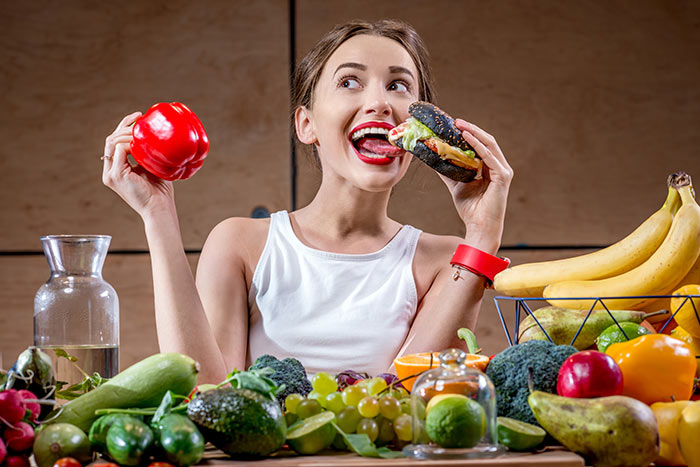 Freelance outdoor writer Amanda Mims has been a vegetarian for six years and a vegan for five. The 34-year-old Inverness resident says a vegetarian or vegan lifestyle isn’t as hard as some think.

“Giving up meat and becoming vegan is not difficult at all, although there is a bit of a learning curve at the beginning,” she says. “It’s hard to know exactly what to do at first when you’ve lived your entire life eating a certain way, but it’s surprisingly easy to adapt almost any recipe to be vegan. Once I recreated the McDonald’s Big Mac using all vegan ingredients, and it was delicious.”

The ease with which some people make the transition from a “regular American diet,” which includes meat, to vegetarianism, doesn’t hold true for all people. According to a study performed by the Humane Research Council, 84 percent of persons who adopt a vegetarian/vegan lifestyle will eventually abandon it and return to their former diet. Researchers inferred many reasons for persons abandoning vegetarianism: transitioning too quickly, not developing a social network with other vegetarians, convenience, social dynamics, finding ways to mitigate temptation and, first on the list, taste.

Taste is the major determinant when it comes to eating any specific food. According to the European Food Information Council, taste includes all sensory stimulation, including smell, appearance and texture. And, they say, this sensory stimulation influences in particular our spontaneous food choices.

So, basically, we are going to eat what tastes good to us. If it smells good, looks good and the texture is palatable, the odds are good that we are going to eat it. This is why it is of vital importance to people who want to adopt a vegetarian or vegan lifestyle, or simply to avoid the possible health hazards of red meat, to find a tasty alternative.

Journalist Vicky Berman has been sharing healthy home-cooked vegetarian and vegan recipes on her blog, Avocado Pesto, for more than five years. She has spent the last three and a half years backpacking around the world garnering recipe inspiration from various local and regional cultures. Berman feels that not only is a vegetarian diet healthier, it is definitely tastier and more exciting.

“Meatless burgers are so much more exciting than your standard hamburger,” she says. “They are packed full of protein and have a much wider flavor profile and an endless variety of ingredient combinations. They are lighter, and you simply feel healthier eating them.”

Mims agrees, saying that her first choice is to prepare a tasty “meatless burger” at home, but there are viable store-bought choices.

“If someone just feels like having a burger, then premade vegetarian substitutes are a great alternative,” she says. “But you can definitely make tasty, healthy veggie burgers at home. In fact, one of my absolute favorite vegan burgers to make isn’t a burger at all but a marinated and roasted or grilled Portobello mushroom cap topped with a good vegan sliced cheese, such as Field Roast’s Chao brand cheese. Other vegan burger must-haves include Vegenaise and Just Mayo (I especially like the sriracha). But, if you want the convenience of premade, then some of the store-bought ones, made by Gardein or Field Roast, come close to actual hamburgers in flavor and texture. These and other meat alternatives are great for people who are new to vegan eating and want to continue eating meals that are similar to what they were used to before going vegan.”

Some of the companies that offer alternative vegetarian and vegan burgers include Amy’s, Big Mountain Organic, Morningstar Farms, Gardenburger, Hilary’s Eat Well, Qrunchburgers, Gardein, Dr. Praeger’s, Field Roast, Qrunch and Sol Quisine, to name a few. Virtually all of these companies have websites that sell their products directly or help you locate the nearest store that sells their products.

“I usually prepare food ahead of time when I know I’ll be out during breakfast or lunch, but you can get vegan meals at many fast-food restaurants now, including Taco Bell and Wendy’s. There are several good websites to help people looking for vegan options when dining out. Usually a little bit of Internet research is all that’s needed to find something suitable at a fast-food or sit-down chain restaurant. Independent restaurants are typically happy to answer questions if you call ahead of time and ask about vegan options.”

With the average adult American eating slightly more than 70 pounds of red meat each year, it is highly unlikely that burgers are going to go by the wayside anytime soon. Even with the World Health Organization labeling red meat as “probably carcinogenic to humans” and the American Institute for Cancer Research warning people not to eat more than 18 ounces per week to avoid increasing the risk of developing colorectal cancer, Americans still eat an average of three hamburgers a week, which comes to 50 billion burgers eaten nationwide each year.

“I think if people knew there was such a tasty and healthy alternative to eating meat that they would choose to have vegetarian or vegan burgers,” says Mims. “After all, we all want to lead healthy, happy lives. Doesn’t it just make sense to eat the foods that do your body the most good while also doing what is ethically right for the environment and for the animals of this world?” 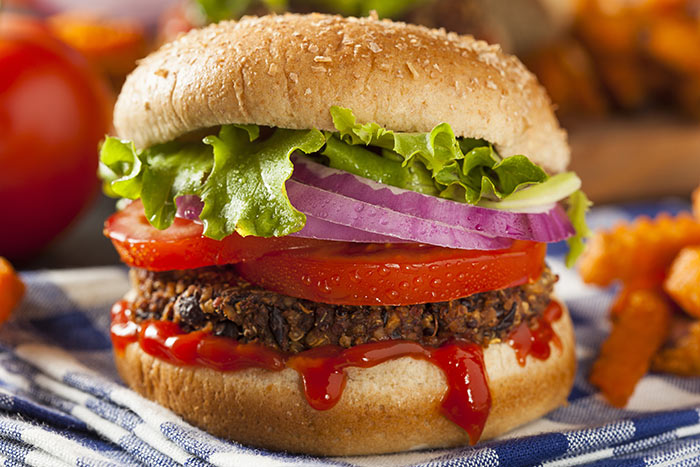 Heat one tablespoon of olive oil in a large skillet over medium heat. › Add onions and garlic; cook and stir for a few minutes. › Mix in the habanero pepper, and continue cooking until tender. › Remove from the heat, and transfer to a bowl. › Pour in the beans, rice and bread crumbs. › Season with ginger, salt, allspice and nutmeg. › Mix thoroughly using your hands. › Form into 6 patties. › Heat the remaining oil in a large skillet over medium-high heat. (You can use the same one.) › Fry the patties until golden on each side, about 10 minutes total. › Serve on buns with your favorite toppings. 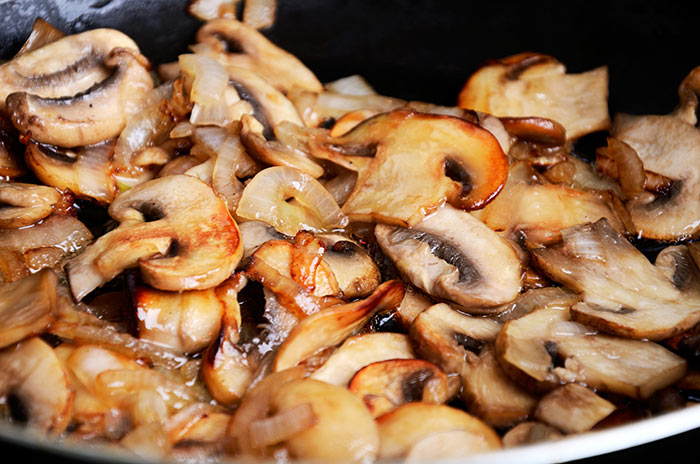 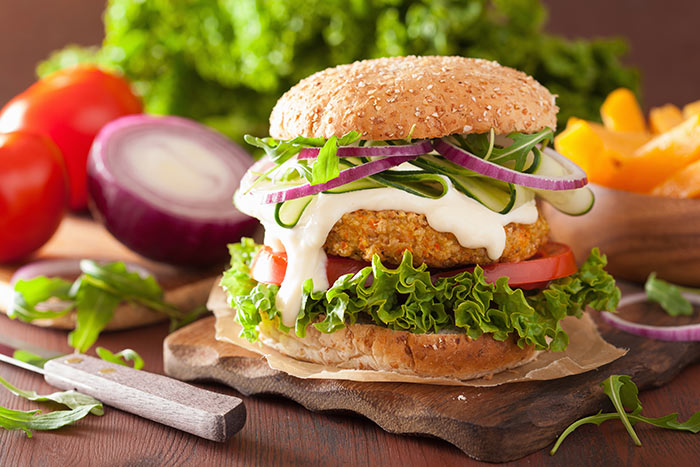 5ounces firm tofu, with the excess water squeezed out with a paper towel

Crumble tofu with your hands into a bowl. › Add in the cooked sweet potato, and with a fork, mash them together. › Add in the rest of the ingredients except the olive oil. › Mix until combined. › Form patties with your hands. › Heat pan over medium heat, and add olive oil. › Cook patties for a few minutes on each side until browned (can bake these in the oven instead). › Serve on burger buns or in lettuce wraps.

Recipe supplied by Vicky Berman at AvocadoPesto.com (Adapted from Love and Lemons) Recipe can be found at avocadopesto.com/2014/07/05/vegan-sweet-potato-tofu-burgers