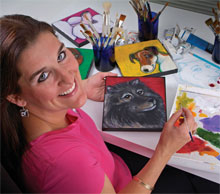 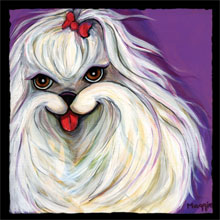 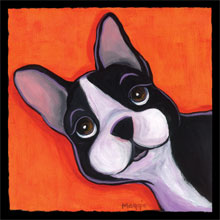 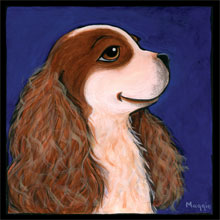 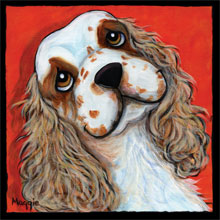 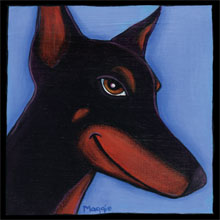 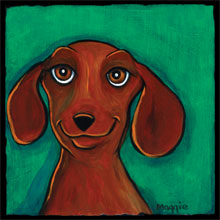 Maggie Perez Weakley’s artwork has gone to the dogs.

Under the banner of Maggie’s Angels, her collection of animated portraits of man’s best friend is pure whimsical delight. It’s as though these dogs stepped into one of those amusement park photo booths, hammed it up for the camera, then the pictures were transformed by Maggie’s magical paintbrush.

The result is bright, colorful portraits full of each particular breed’s unique characteristics, sure to bring a smile and a tug of the heart to every dog lover. There’s the ever-ready-to-fetch black Labrador retriever, the snooty white poodle, and the regal Yorkshire terrier. Not to be outdone are the loyal beagle, the glamorous Maltese terrier, the happy-go-lucky English bulldog. Who could resist the inquisitive Scottish terrier or the I-know-I’m-precious Chihuahua? And there’s that bug-eyed, bat-eared Boston terrier wondering if it’s time to go out and play yet.

If your favorite breed isn’t currently part of Maggie’s Angels, chances are it soon will be, as the line continues to evolve. And, better yet, you can commission Maggie to paint your own best friend.

For her, Maggie’s Angels is the blending of both her personal and professional life into her signature work.

“I always liked to doodle, even as a child,” she says. “After deciding on a career in art, I’ve done a wide variety of work — from pencil drawings to illustrations to oils, even ceramics. Maggie’s Angels is what I’ve been working toward all my life.”

Born of Cuban immigrants in New Jersey and raised in Spain prior to moving to the Orlando area as a teenager, Maggie has always had a love of animals. Before she had her first dog, a mixed breed named Lady as a teenager, she had a pet turtle, a parakeet, and goldfish.

“I really thought I was going to be a marine biologist,” concedes Maggie, 40, who comes by her science interest naturally — her father and grandfather are both doctors. “I was also taking art classes at the University of Central Florida. But I still wasn’t all that serious about it until a friend talked me into taking private art classes. That’s when things started to change.”

Maggie admits that art “started to take over my life” during those classes with Barbara Bassett. After watching the other students put together portfolios to submit to art schools, Maggie finally worked up the courage to ask her mentor if she should do the same.

“She said she thought I’d never ask,” recalls Maggie, who’s just as personable and animated as her artwork.

Submitting her portfolio to four art schools, Maggie was accepted to Bassett’s alma mater: Columbus College of Art and Design.

“I was ecstatic,” Maggie says. “I have two sisters and I’m the middle child, so this was a big thing for me to move so far away from my family.”

Maggie thrived at CCAD, soaking in the abundance of art course offerings. It was also then she acquired her second dog, Perry, a West Highland white terrier. It was also where she met her future husband, Kent Weakley, who was an advertising major at CCAD.

“None of my friends had much money, so we were always trying to help each other out,” she says. “I was the one who gave my friends free haircuts. That’s how I met Kent. I gave him a free haircut.”

While the sparks of true love were there, the couple’s ultimate marriage (of 12 years now) would have to wait as both pursued their careers. Upon graduation, she was recruited by Hallmark Cards, Inc. and he founded Blue Sky Graphic Communication, Inc., an advertising and graphic design agency. However, they maintained a long-distance friendship that grew into romance. Maggie moved to Hallmark’s headquarters in Kansas City, Missouri, and Kent remained in Columbus.

At Hallmark for three years, Maggie became the art director for the instantly popular, slightly irreverent Shoebox Greetings division of the card company.

“Working at Hallmark was a phenomenal experience,” she says adamantly. “The creative inspiration and the resources were unbelievable, almost overwhelming. I couldn’t have dreamed of a better opportunity.”

“Perry and Fe were the two greatest companions that anyone could ever have,” she says.

Perry and Fe continued to be part of her family for many years.

“Perry was with me through college,” Maggie says. “And the two of them were there for my first job, my wedding, my becoming a mother, our move to Ocala. It was truly a very special relationship and I am so grateful to have had them.”

Perry, who lived to be 14, passed away in 2002, and Fe, who was almost 15, passed away in February 2005. It should come as no surprise that Perry and Fe, along with Lady, were the inspiration for rapidly growing new line.

“They were angels sent to me to share my life,” says Maggie. “That’s where the idea for Maggie’s Angels came from.”

Maggie shares her life these days with Kent; sons Lucas (10) and Max (8); a four-year-old West Highland white terrier named Angel; a canary; a hamster; goldfish and tropical fish; and Luna, a seven-year-old Paint horse. Her art studio and Blue Sky Graphic Communication, Inc. are both located in separate spaces in the home the Weakleys discovered while driving through Ocala on the way to Orlando 11 years ago.

“We pulled off the interstate in Ocala to get something to eat and I saw a real estate billboard advertising farms for sale,” recalls Maggie. “I’d always wanted to own a place where I could have a horse.”

Writing down the real estate office’s number, the Weakleys came back later to look at houses and fell in love at first sight with their eventual home.

“Four months later, we bought it,” she recalls. “We rented it out for four years until we could make the move in 1998.”

Maggie’s studio is a large room, framed by white walls and white cabinets. Wall shelves are full of books that inspire her: books on dogs, horses, angels, art, and favorite artists. There are dog and horse models, some she has custom painted to suit her, pictures of the family, as well as some of Kent’s infrared photos. A comfy chair with a horsey theme throw is for daydreaming, while a more conventional office chair on rollers is in front of her lighted work area by the windows.

But what dominates the room is Maggie’s Angels. The white walls are lined with the 8-by-8-inch colorful originals of the line, the dogs seemingly inviting you to take them home. Three wicker baskets are filled with just-as-colorful prints of the originals. A variety of Maggie’s Angel’s merchandise is displayed on counter tops: bookmarks, key chains, checkbook covers, jewelry. All the signs of a major signature line.

From a drawer, Maggie pulls out a spiral-bound notebook. It’s dated 2000 and filled with pages and pages of her initial Maggie’s Angels concept.

“This idea has been brewing around in my head for a long time,” she says. “I just needed a deadline.”

That came last March when Maggie was invited to participate in Marion Cultural Alliance’s Bark About Art show. Maggie had been involved with the original MCA Horse Fever project, painting Horse Fly and Celeste. Blue Sky Graphic Communication, Inc. had also handled the promotion of the Horse Fever project.

“I knew right away that the Bark About Art show was just what I had been looking for to motivate me to launch Maggie’s Angels,” says Maggie. “But I didn’t have one painting done, only ideas. It was going to be a challenge.”

For two months, right up until the night before the show, Maggie created and painted the original 35 Maggie’s Angels. She also painted Holly, the Chihuahua featured on the Bark About Art official poster.

“The response was wonderful,” she says. “It’s been non-stop since then.

“The most important thing for me is that the portrait captures the dog’s personality,” she continues. “When the owner first sees it, if there’s an emotional response — some people just smile, others laugh, and some cry — then I know I’ve done my job.”

Original works are done in acrylics on thick wood board. The board is sanded and sealed with a white acrylic base coat, sides and back are painted black, and each customer picks out the background on the front of the board to go with the portrait. The standard size is 8 by 8, but any size and shape can be custom ordered. Typical time for a completed portrait is two to three weeks, but that can vary depending on each individual piece.

“Having my own wonderful pets, I understand how important a person’s pet is to them,” Maggie says. “I want to create a special keepsake that will last a lifetime.”

And while dogs are the current focus of Maggie’s Angels, there are plans to expand the line.

“I’d like to add horses and cats to the collection,” says Maggie. “Animals bring such joy and wonderful companionship to our lives. That’s what Maggie’s Angels is all about.”