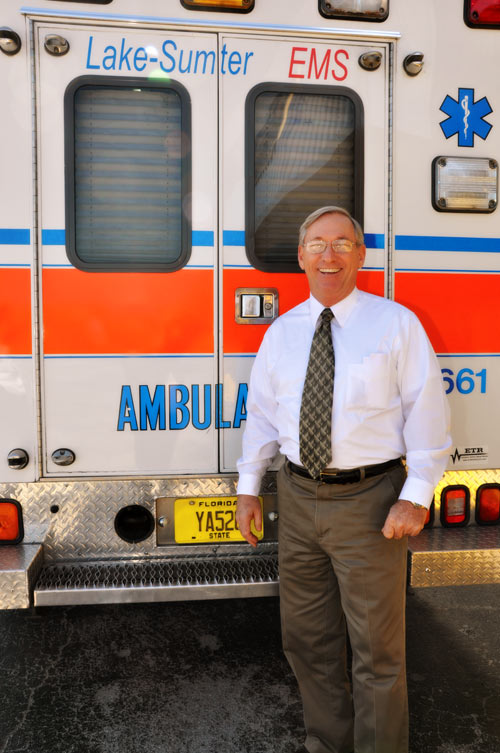 Responding to more than 51,000 emergency medical calls a year and covering over 1,800 square miles keeps Lake-Sumter Emergency Medical Services quite busy. The unique government‑owned, bi-county organization has been recognized nationally for its excellent response times, state-of-the-art technology, and exemplary communications center. Not quite 10 years old, the service not only dispatches emergency medical calls for Lake and Sumter counties, but also for 13 local fire departments.

Yet, almost everyone from the top down finds time to volunteer in numerous community outreach programs, emulating their leader Jim Judge who guides the daily operations.

“We like to say that we are in rhythm with the community,” says Judge who has been the Lake-Sumter EMS executive director since 2002. “And there’s nothing better than helping someone.”

Judge’s leadership has enabled his team to make a difference in places that are often overlooked. For instance, he heard about people in northeast Lake County who were making choices between food and medicine. As a board member for United Way, Judge found a way to establish a food bank at the EMS station in Altoona.

When he learned that many elderly in the area lived alone and did not have transportation, he established a “Well-Check” program. When call-volume is low, EMS technicians visit the homebound to make sure everything is okay.

“The program was a big help during the hurricanes of 2004,” says Judge. “We knew where these people were when the storms hit.”

He credits his 265 employees, who he describes as caring, empathetic, and eager to be involved in the community. His staff and others say that it is Judge’s high-energy personality that galvanizes the EMS organization.

“I wonder how he does it all sometimes because he also is involved in so many great humanitarian and charitable causes,” says EMS Board member Gary Kadow. “His team follows his lead.”

Under Judge’s leadership the organization has been recognized as one of the best service providers in the nation. The Florida Department of Health Bureau of Emergency Medical Services (EMS) named Lake-Sumter EMS Florida’s 2008 EMS Provider of the Year. Later that year, the National Association of EMTs honored it with the National EMS Service of the Year award. In 2009, the International Academies of Emergency Dispatch voted unanimously to award accreditation to the organization as an Emergency Medical Dispatch Center of Excellence. Only 125 such centers exist in the nation.

State EMS director John Bixler told Judge that Lake-Sumter EMS had exceeded the state’s goals after winning the EMS Service Provider of the Year and “had set the new benchmark for EMS services in the state of Florida.”

Even with all of the awards and accolades, Judge is humble about the attention. He calls them “community awards” because without partnerships, he says, the EMS couldn’t do its job.

“The partnerships with the fire services are critical,” explains Judge. “Because of the size of our territory, fire rescue can often get to a location before we can.”

The communications center for Lake-Sumter EMS handles more calls than many large cities, including 8,000 a year just from The Villages. The response time to an emergency medical call is about six minutes; the national average is nine minutes. Last year, ambulances transported 37,909 patients to 12 different hospitals in eight counties.

Because of the tremendous call volume, Lake-Sumter EMS designed a “When to Call 911” awareness campaign, which was a big factor in the national awards that the EMS received. The program has caught the attention of EMS agencies around the country that agree that non-emergency calls are a growing problem everywhere. In 2008, the Lake-Sumter EMS had more than 7,000 such calls.

“Part of the focus of this campaign is to help people know who, how, and when to call for help in an emergency and what to do while waiting for the ambulance,” says Judge. “The program helps address these issues in a positive, informational way.”

Technology and training are two other critical components to Lake-Sumter EMS’s success. Kadow believes that Judge’s dedication to training is what makes Lake-Sumter EMS a national leader.

“He maintains state-of-the-art training for his people,” Kadow says. “When you think of how many EMS providers there are in the U.S., it’s amazing that ours has taken all the top awards.”

Technology is indispensible in what Judge calls the “pre-hospital environment.” From mechanical CPR devices to retractable stretchers, the vehicles are traveling mini-medical centers that often make the difference in a patient’s outcome.

Judge remembers the days, however, when ambulances weren’t the state‑of‑the‑art vehicles that they are today. In fact, in many areas including Lake and Sumter counties, they weren’t ambulances at all, but rather hearses that could be quickly converted into emergency vehicles.

“Funeral homes had combination vehicles that were both hearses and ambulances,” explains Judge. “They had red lights that could be bolted in the roof and rollers that would flip over to make a solid floor.”

Judge’s dad was a funeral director in Boca Raton, and in June 1972 he hired his son as an ambulance/hearse driver. Judge eventually worked in fire rescue and later served as the EMS director for Indian River County. His Indian River EMS service also won state and national provider of the year awards while he was at its helm.

The awards are not what make him tick, though. Growing the service and using technology to work smarter are his goals—along with staying attuned to what the community needs.

“It doesn’t matter what folks in other states think about us if the hometown doesn’t like us,” says Jim. “We’re only as good as the last call we ran.”