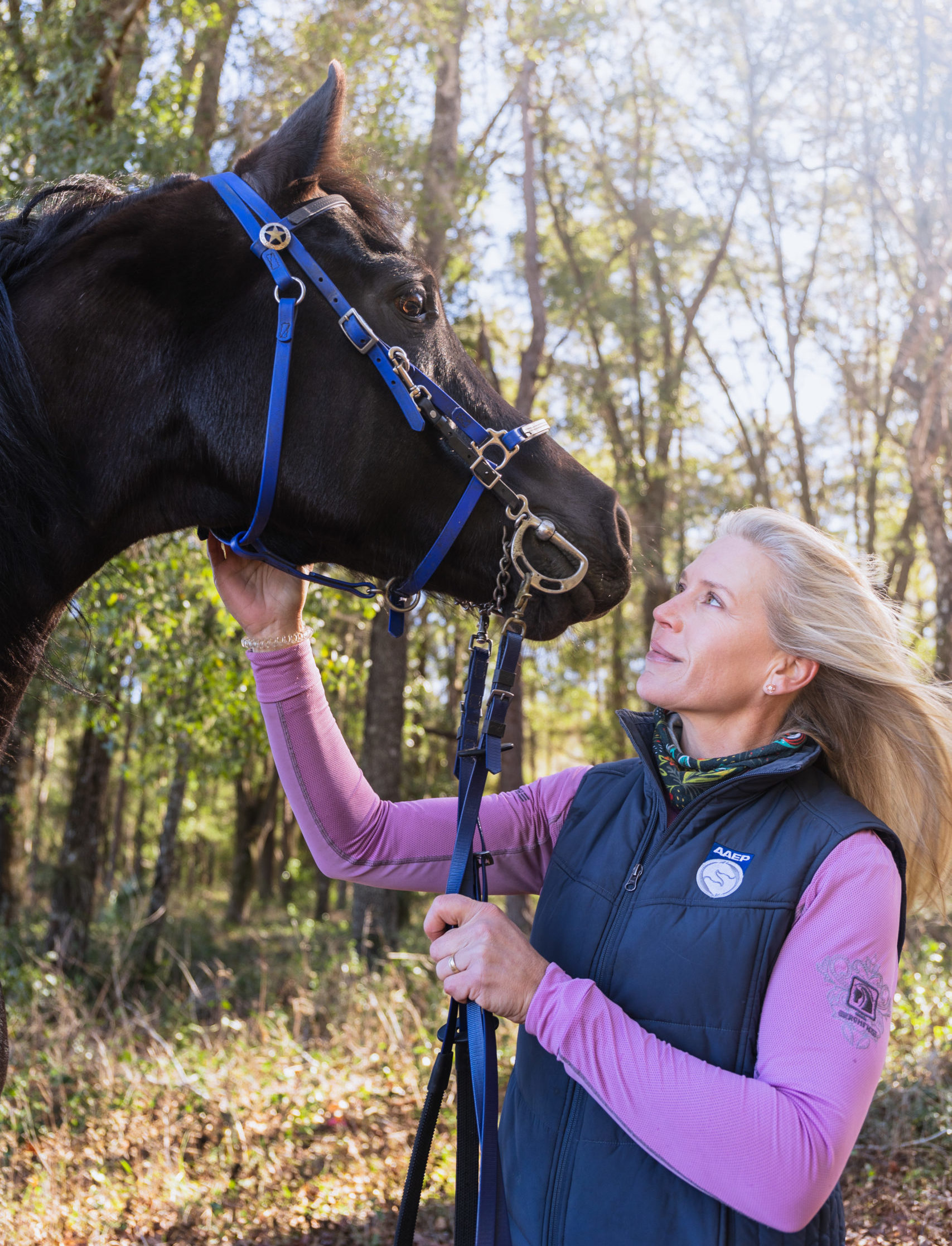 A lifelong rider and accomplished horsewoman, Tiff any Atteberry is preparing to take on an epic equine adventure in the formidable Mongol Derby.

The Mongol Derby is part adventure, part challenge and maybe just a little bit crazy. Imagine riding several native horses, none of which you’ve ever ridden before, over more than 600 miles across the Mongolian Steppe for 10 days, camping out when not sleeping in yurts and eating exotic local cuisine. All of that is exactly why Ocala based equine veterinarian Dr. Tiffany Atteberry is competing in the Mongol Derby this summer.

“I’ve always been an adventurous and competitive person in everything that I do. And especially when it comes to riding horses,” says Atteberry, 46, who is petite enough to have been a jockey if she hadn’t become an equine vet. “I rode with my mother, Lynda, sitting behind her on the saddle, until I was 4. And then, at 5, I got my own horse, not a pony. I’ve never been without a horse ever in my life. You could say I have gone through life on horseback.”

Backing up that declaration, Atteberry competed in Western and English riding disciplines from elementary through high school while growing up in Murfreesboro, Tennessee. Having decided at age 8 that she wanted to be an equine vet, upon graduating high school she was off to the University of Findlay in Ohio. And, of course, her horse went with her. 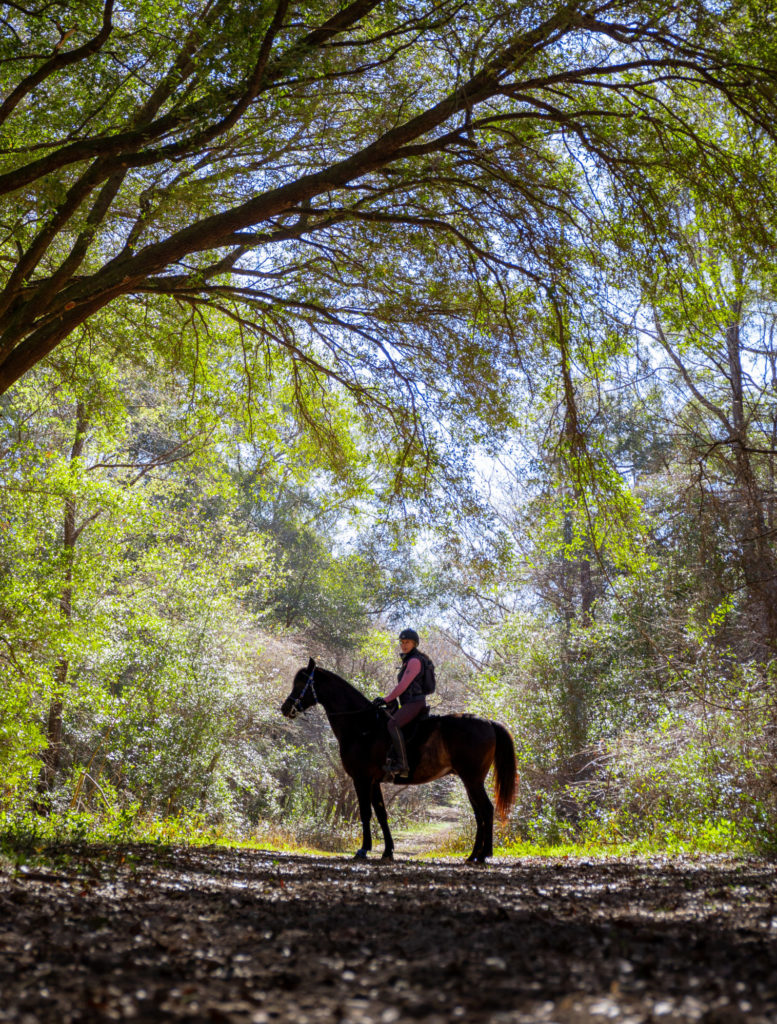 “Findlay has a unique Pre-Veterinary Sciences program that allows you to complete all the core requirements for veterinary school in three years,” explains Atteberry, who seems to possess an endless supply of energy, mentally and physically. “And if you get accepted into a vet college when you apply after those three years, they allow the first year of veterinary school to complete your B.S. degree. That means you have one less year of college to pay for.”

Atteberry was accepted into several colleges of veterinary medicine and chose the University of Florida (UF). By that time, she had met her husband to be, Scott Brown. A mechanic by profession, Brown was not a horseman.

“I decided I needed to go to Gainesville alone at first to get organized and find a place to live. As a test, I left my horse in Scott’s care,” admits Atteberry. “I knew horses were always going to be part of my life. I had to know if the man I might marry was up to sharing that life with me. Scott passed the test with flying colors.”

Shortly aft er Atteberry graduated from the UF College of Veterinary Medicine in 2000, the couple married and moved to Jacksonville. There, she worked as an associate veterinarian at the Mandarin Equine Practice for two years.

“I always wanted to have my own veterinarian practice, but I wanted a mobile practice. I didn’t want to be cooped up in a clinic most of the time,” explains Atteberry. “While I was going to UF, I had checked out Ocala and really liked it. We moved to Ocala in 2003 and I established Atteberry Mobile Veterinary Services.”

In 2009, the couple bought their 10-acre farm in southwest Marion County, where they raise thoroughbred racehorses. By then, Atteberry had added drag fox hunting to her equine adventures resume, a sport in which the hounds follow a scent dragged on the ground instead of an actual fox. She’s also taken many horseback-riding vacations, including in Botswana, South Africa and Ireland.

“We have three broodmares and we really enjoy raising thoroughbreds. In addition to his mechanic business, Scott is the farm manager and does a great job,” shares Atteberry, who is also an avid runner. “While I deal with all breeds and provide all veterinary services in my practice, I really enjoy working with mares and foals the most.”

In the wee hours of April 6, 2017, a lightning-capital-of-the world thunderstorm raged through Ocala.

“Scott and I woke up to the smell of smoke and then the smoke detectors went off ,” recalls Atteberry. “We got up, but we couldn’t find any fire, just lots of smoke. We quickly got out of the house and called the fire department. Thank goodness, the firefighters got there as fast as they did, or we would have lost the house.”

Lightning had struck the house and traveled along the propane gas line, igniting a fire inside a downstairs wall.

“Although we were safe and the house could be repaired, it was a life-changing experience. We moved into an RV on the farm while the house was being renovated,” says Atteberry. “It was the middle of breeding and foaling season, a very busy time for my practice. To de-stress in any downtime that I had, I’d watch equine-related YouTube videos. And that’s how I found out about the Mongol Derby.”

Intrigued by the Mongol Derby videos, Atteberry did more research into this extremely challenging horse race. As her interest grew, she had an epiphany.

“Not that I didn’t like our lives, but the fire had made me realize that I had gotten into a bit of rut. I realized I needed a new adventure,” she reveals. “I began to think that competing in the Mongol Derby was just what I needed, so I applied in 2018.”

The application process includes answering several essay questions about a person’s equine background and why he or she wants to compete in the derby. If the race organizers like a person’s essay answers, then the applicant is interviewed by phone. A good first interview then leads to a second interview.

“They liked my essays and I had my first phone interview. Aft er that, I was notified that I would move on to a second interview,” says Atteberry. “It was then that I realized competing in the Mongol Derby might actually happen.” She pauses then adds with a laugh, “I hadn’t told Scott anything about this, so I decided maybe I should before the second interview.”

Her husband’s response was the same as most people’s when learning about the derby.

“Not surprisingly, Scott thought I was crazy to want to do it,” says Atteberry, smiling. “But he was also very supportive and has continued to be.”

Atteberry aced the second interview and then paid her $12,500 entry fee, which doesn’t include travel and other personal expenses, to compete in the 2020 Mongol Derby. Also of note is that there is no prize money awarded to the winner. For the riders who compete, it’s all about the experience.

Then came another epiphany for Atteberry: She needed to take up the sport of endurance riding if she had any chance of completing the grueling 600-plus mile race. And since none of her current horses were endurance horses, Atteberry reached out to the Ocala area’s endurance riding community.

“So many people were happy to help me out and let me train on their horses with them,” says Atteberry. “All was going along well and then COVID-19 hit, shutting down everything in April 2020. The Mongol Derby, which would’ve run in August, was canceled. It was all very disappointing.”

There would also not be a 2021 Mongol Derby and Atteberry wondered if she’d ever get to do it. When word came that the organizers were planning to have not one but two derbies in the summer of 2022, Atteberry was elated. She will compete in the derby scheduled for July 23rd-August 1st.

The inaugural Mongol Derby was in 2009 and, although the course changes from year to year, it is based on Genghis Kahn’s horse messenger system that began in 1224. There are generally 40 or so riders, usually evenly split between men and women. They ride through varied terrain, including forests, verdant open valleys, dunes, wetlands, rolling hills and open grasslands. They must navigate weather that can change in a moment from hot to cold, or from dry to pouring rain. And they do it on Mongolian horses they’ve never ridden before, changing horses every 25 miles. Small in stature at but 13.2 to 15 hands, the Mongolian horses are hardy animals well suited to their country. But they are often described as semi-wild and with one buck they can bring a quick end to a rider’s adventure.

At each horse station, a rider’s mount must pass a vet check before the rider can continue on a fresh horse. Riders generally cover 75 to 100 miles a day and are only allowed to ride during daylight hours. They receive penalty points if their horse doesn’t pass a vet check and/or they ride aft er 8pm. Riders can opt to camp out or stay overnight with locals in yurts.

Competitors have 10 days to finish the ride, but winning riders come in under that mark. In 2019, Bob Long, 70, from Boise, Idaho, became the oldest person to win the Mongol Derby, doing so in seven and a half days.

“The organizers provide each rider with a saddle customized to fi t a Mongolian horse since they are very short backed. We can bring our own stirrup straps and stirrups,” says Atteberry. “I actually bought a Mongolian saddle and have been using it on my endurance rides. I’ve also been riding with my Camelbak hydration backpack and other gear that I’ll carry. We are only allowed to carry about 11 pounds on our body. We’re given a Garmin GPS, so I bought one and have been using it.”

Atteberry has competed in several 25- and 50-mile endurance rides and has plans to do at least one 100-mile ride. She has been using horses owned by experienced endurance riders, including Caren Risley and Deb Walker. Atteberry has been regularly riding H Lunar H, Walker’s 8-year-old Arabian gelding.

“I’ve been happy to help Tiffany out. She’s an excellent rider,” says Walker. “It’s very exciting that she’s doing the Mongol Derby and she’ll do well.”

Atteberry will fl y to Mongolia on July 16th and then will have three training days from July 20th through the 22nd, prior to the start of the race. The plan is for Scott to fly in toward the end of the event to be there at the finish.

“I am so excited to be doing this horseback adventure,” says Atteberry, beaming. “I know it’ll be a challenge, but I do love challenges.”