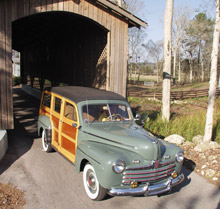 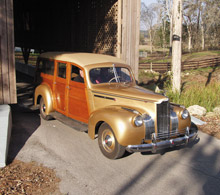 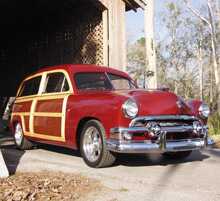 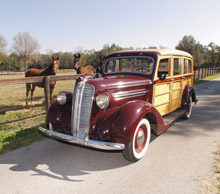 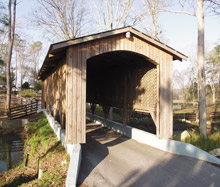 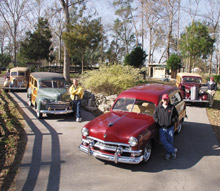 What better way to display one of the great icons of the American automobile industry than at a covered bridge? That’s how four central Florida owners of “woodies” came to select the only bridge of its kind in Marion County to show off their meticulously restored station wagons. The occasion that brought these men together, besides their love of woodies, was a private photo session recently held at the bridge located at Mac Mt. Farms off US 27.

“These guys thought it was the greatest place in the world to take pictures,” says farm owner Tom McKinnon, who added that two of the woodie owners had previously used the covered bridge as a photographic backdrop. “They enjoyed their pictures so much they decided to bring more woodies.”

And bring them they did. There was Ed Welch of Ocala with the oldest vehicle of the group, a 1937 Dodge woodie. “No special features, just a standard woodie of the day,” Welch says of his car. “It was an original car, but we made a new body for it and repainted it.”

Bruce Perreault drove his 1951 Ford woodie up from Windemere, near Orlando. “I found it in a barn up in Gainesville,” he says. “It had been in there for 23 years. It took me 22 months, working about five days a week to restore it.”

Bruce says he has more than $100,000 invested in the car. He takes it to various antique shows throughout Florida and the northeast. “It’s either ‘Best in Show’ or ‘People’s Choice’ everywhere I’ve taken it,” he says.

Steve Dana, who winters in Ocala but calls Vermont his home, brought his six-cylinder 1941 Packard. “The neat thing about the car was that the body was actually built in Jacksonville and it is all made out of teak — 100% teak,” he says. According to Dana, the wagon had been in a wreck. By the time its former owner, a yacht builder, got around to restoring it, the original wood was so rotten he decided to rebuild it using nicer wood. Dana, who says he has no problem taking the car out on the interstate, once drove the vehicle down from Vermont, making the trip in two days.

Bill Joslym drove his 1946 Ford woodie flathead V8 up from Mount Dora. “I bought the car at an estate auction in Springfield, Missouri, five years ago,” he says. He had the vehicle trucked to Ocala where Glen Redding, a recognized woodie restoration specialist refurbished the woodwork.

McKinnon’s covered bridge was completed in 2001. The bottom part of the structure, which spans a ravine-like area, was originally built to handle drainage problems. McKinnon added the covered portion later. In addition to serving as a showcase for woodies, the bridge has served as a photo backdrop for McKinnon’s horses. He hopes that some folks will recognize it as a great setting to hold weddings.