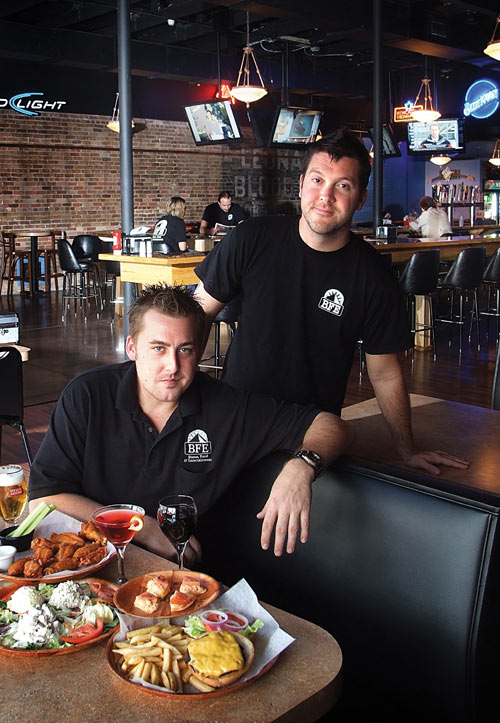 For four years Hugh Price lived his dream. He made the move west to California and toured nationally with his band Moss Bluff. Hugh jokes that it was a quarter-life crisis at 27 that brought him back home to Ocala where he was born and raised.

“My family and friends are here,” he says, “so I decided this is where I wanted—and needed—to be.”

Hugh is living a different kind of dream today. With the help of a handful of dedicated friends, including long-time friend Brandon Magnuson, he recently opened Ocala’s newest hot spot, BFE. No, not the “BFE” you’re thinking of! This BFE stands for “Booze, Food, and Entertainment.”

“My friends and I had a bunch of party spots while we were in high school,” Hugh explains. “We were going through old names, we called places, and BFE came up. Someone correlated it to ‘booze, food, and entertainment’ and it stuck.”

Located on Southwest Broadway downtown, BFE is not your typical hangout. While touring the U.S., Hugh saw the inside of many of the nation’s hippest night spots.

“I began to take notes,” he says. “I wanted to incorporate a few of the ideas into BFE.”

A series of vibrant wall murals, a collection of sliding doors, and a full lunch and dinner menu are just a few of the elements Hugh included. Soon, BFE will even showcase a variety of local artists’ works on its massive brick wall.

“We wanted a place where people could go to relax and be themselves,” Brandon says. “We don’t cater to a specific age group or demographic. From sports and a full bar to a complete menu and live music, there’s something for everyone.”

“One of the best compliments we’ve received is that there’s no other place like BFE in Ocala,” adds Hugh.

And there really isn’t.

“The burgers are phenomenal,” Brandon adds. “The cattle are locally raised, free-range, and grass-fed.”

Hugh’s personal favorite is the Mom’s Crabby Things (yes, they’re made by Hugh’s mom), a mix of crab and cheese topped on an English muffin and broiled. Yum! They even offer a kids’ menu and a dessert of the day.

Consider BFE a restaurant and sports bar by day—you can’t miss the nine flat-screen televisions or the 100-inch projection screen—and a casual hangout by night. It’s what Hugh calls “the best of both worlds.”

Give BFE a try today. It just may become your new favorite place.