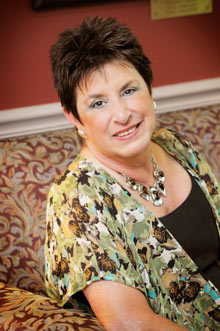 Like so many in the early ‘70s, I majored in liberal arts in college, another way of saying I was just “out there.” When I decided on a serious career in veterinary medicine, fate intervened in the form of breast cancer and I underwent a mastectomy instead of orientation. The dream of vet school faded. The risk from bites or scratches was too high.

After surgery, I quickly recovered. I attribute that to the special touch of a caring nurse. So instead of puppies, I decided taking care of humans could be just as rewarding. At 38, I started nursing school at CFCC, and it was during a hospice rotation that I met Vicki Canada, a registered nurse with Hospice of Marion County. That day I discovered that hospice was my mission. Unbeknownst to me then, Vicki would not only become my mentor but would also become my hospice nurse when I received another devastating diagnosis 10 years later.

The years flew by, but in early 2008, my breathing became labored. I was an active 55-year-old, but I could barely dress myself without becoming winded. No, the cancer had not returned, but the emphysema that began in my mid-20s had suddenly escalated. I ignored the symptoms for three months until I turned blue from a lack of oxygen. After looking at my test results, the pulmonologist asked, “Are you on a transplant list?”

The seriousness of my condition didn’t sink in, and while I had to leave the job I loved as a hospice nurse, it never occurred to me that I now met the criteria for becoming a hospice patient. Our top doc gave me a call, but I turned him down flat: “Not ready for hospice yet!”

The next day, I called him back. He explained how my condition was not just about my lungs but about the stress that Chronic Obstructive Pulmonary Disease (COPD) was putting on my other organs, especially my heart.

“I knew we could help manage her symptoms and get her strong enough for surgery,” says Picky Pares, MD. “At her current condition, the odds were not good.”

I was admitted to hospice in June 2008. With a lung function of just 18 percent, the experts at the Mayo Clinic opted for lung volume reduction over a transplant. I underwent physical therapy twice a week until I was strong enough to “graduate” from hospice and undergo the operation. In December, approximately 20-35 percent of each lung was removed.

This is not a routine surgery and two hours later, I developed a major bleed. Back in the OR, I went into full code, but after 10 pints of replacement blood and the expertise of the surgeons, I came back. During the surgery, a nodule was discovered and removed, and thanks to another blessing, the lab results came back “benign.”

The surgery offered no guarantees at that point, so when I returned home, I still met the criteria for hospice and the insurance company recognized the significant contribution hospice made. Beating those long odds, I was finally discharged from hospice in February 2009 when I blew them away—literally!—at Mayo with my improved lung power. I was finally able to let go of that rolling oxygen tank and plastic schnozzle!

Today, I’m as active as ever—playing “Funny Bones” in my clown troupe, performing in Little Theatre, and traveling with my husband, Stu. I also represent Hospice of Marion County, appearing in ads and speaking at events to raise awareness of the gift of hospice. I know I’m living proof that no two hospice patients are alike.