Although the Appleton Museum of Art is filled with extraordinary art, the Orientalist collection is among its brightest stars. The redesign of the museum’s second floor features a faience-blue gallery dedicated to these

important artworks. Gifted entirely by Arthur I. Appleton, the collection features both painting and sculpture by such renowned artists as Jean-Léon Gérôme and Edwin Lord Weeks.

Although many people think of “Orientalism” as having to do with Japan or China, when used in art history, the term has a different meaning. The term, as an artistic movement, can be roughly dated from the 1800s to the early 1900s and refers to the mainly European colonization of what was then referred to as “The Orient,” namely the Levant and North African countries such as Algeria, Morocco and Egypt.

In the 19th century, it became fashionable for wealthy young people, especially unmarried men, to take a year-long coming of age trip referred to as the “Grand Tour.” The trip was seen as educationally important to learn about different cultures and experience unfamiliar artwork and architecture. North African and Middle Eastern locales such as Egypt and Turkey were essential stops on the Grand Tour.

Due to cultural differences and language barriers, many assumptions were made about the people and places visited, and

In addition, Middle Eastern-themed pavilions at the series of  International Exhibitions and recent discoveries on archaeological digs further stirred European and American interest in the “exotic” Middle East. Unsurprisingly, the art produced at this time fed the public’s fascination. Depictions of alluring harem women and bold Arab warriors became fashionable to have in the home and showed a person’s worldliness and sophisticated tastes.

Filled with depictions of both the realistic and fantastical, Orientalist art can present the quiet elegance of a market scene or the implausible depiction of an alluring “harem” woman, yet is undeniably beautiful. We invite you to visit the Appleton Museum of Art to learn more about this fascinating style. 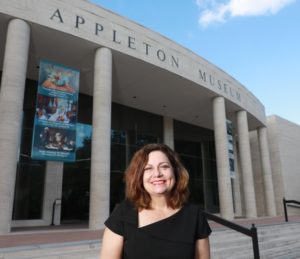 As curator of the Appleton Museum of Art, one of...

Art for Everyone Museums and art galleries are both important...