Winner of Guy’s Big Project is authentic to his down-home barbecue core. 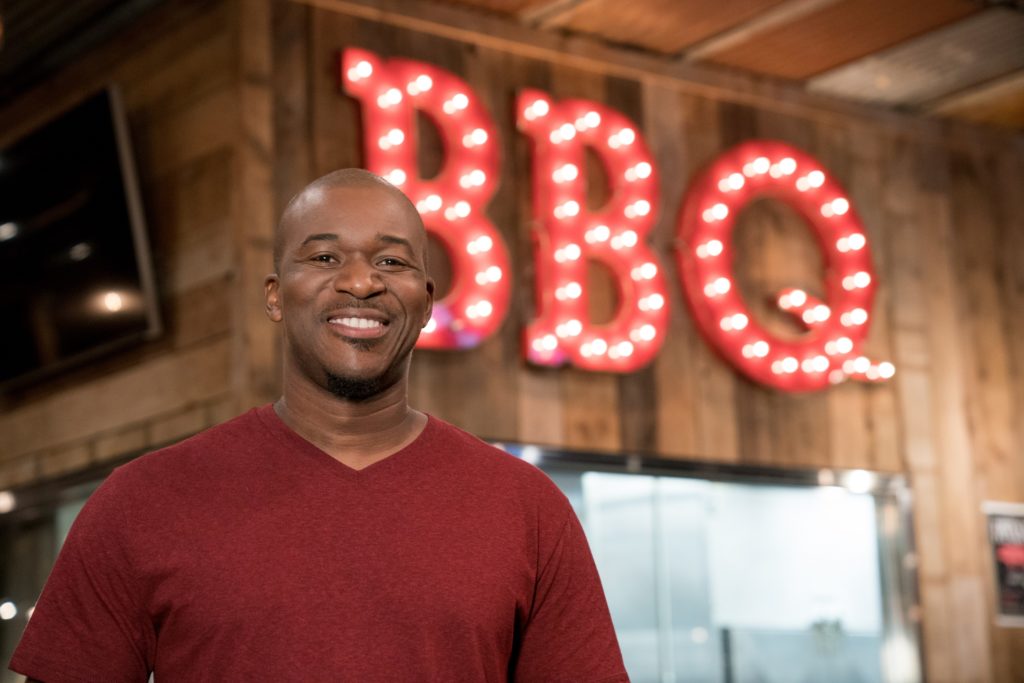 Rashad Jones has always believed in dreams coming true. After all, this self-proclaimed barbecue nerd not only has his own food trailer business (barbecue, of course) but is also a motivational speaker who regularly encourages folks to identify and pursue their goals. He also works with disadvantaged high school-age youth and does life-skills mentoring.

So when the 39-year-old Ocala, Florida, resident was recently announced as winner of Food Network’s Guy’s Big Project, dreams literally became reality. It was the next step in an exciting new chapter for this big-hearted father of four who is unabashedly enthusiastic about his love for his family—and all things barbecue.

In the December 10 finale of Guy Fieri’s culinary travel series, not one but two food-road shows were chosen to become new primetime series on Food Network. Rashad Jones’ show is entitled Eat, Sleep, BBQ, while the other winning series is The Grill Dads with Mark Anderson and Ryan Fey.

“I wanted to give someone the same opportunity that I had been given, and I couldn’t be more excited for Mark, Ryan and Rashad to realize their dreams of having a series on Food Network,” says Guy Fieri.

He was one of 10 contestants chosen from thousands of applicants who submitted demo tapes. Finding out that he’d been selected to be on the show was overwhelming in itself.

Rashad had just spent two long days working at his Big Lee’s BBQ, the business he and wife, Patrice, operate in Ocala. By the end of a weekend, after cooking hundreds of pounds of food and talking with hundreds of customers, he is, in his words, “wiped.” So when the phone rang on Sunday night and a representative of Food Network told Rashad he’d been selected to be on Guy’s Big Project, he literally started to cry. His wife soon joined in.

“Our four boys—Caleb, Jordan, Jeremiah and Christopher—were right there. I put the phone on speaker so they could hear, and I just started bawling. Everyone tells you guys have to be tough and not show emotion, but I don’t think that’s true. Our 4-year-old son, Jordan, was patting me on the back saying, ‘Daddy, it’s going to be OK,’” recalls Rashad. “We had to explain these were tears of joy.”

When he and Patrice renovated an old food trailer and launched Big Lee’s BBQ in 2014, it didn’t take long for their homegrown business to earn five-star status and a TripAdvisor Certificate of Excellence. Now people drive long miles to savor their must-be-eaten-to-be-believed slow-smoked brisket, ribs, sausage and side dishes.

Customers needn’t worry that Big Lee’s will close now that Rashad has his own television series. The show has just made this humble guy even more passionate about barbecue.

“I’m always pushing myself to use all my potential, whether it’s as a husband, father, business owner or TV host. I give motivational talks, so I have to live that, or it’s not authentic,” he explains. “I’m a straight-up 100 percent barbecue dude. That’s what makes Eat, Sleep, BBQ what it is, so if anything, this show has empowered me and given me more ideas of what to do with Big Lee’s.”

The six weeks of filming Guy’s Big Project were challenging in that Rashad had never been away from his family that long.

“My family is my source of inspiration. It was a sacrifice not to lay eyes on my beautiful wife or hold my baby boy for that long. I like tucking them in and saying their prayers with them,” says Rashad, adding that without his wife, family and their dedicated staff, he could never have been away so long.

Fortunately, the filming of Eat, Sleep, BBQ didn’t require him to stay gone for the entire month of filming.

“The producer got to know what a family guy I am, and he scheduled it so I could fly home to see my family and refuel myself,” says Rashad.

He adds that on Guy’s Big Project, host Guy Fieri genuinely cared about each of the show’s participants.

“He spent a lot of time talking to Patrice and me about learning the balance in being a successful restaurateur and then experiencing success in a TV show when he started Diners, Drive-ins and Dives,” Rashad says.

Rashad is thrilled that Eat, Sleep, BBQ showcases some of the country’s best barbecue—and not just in the South.

“We went to six different states and found great barbecue everywhere,” he says. “When you think about the history of food and cooking, barbecue is the earliest form of cooking meat. Food is the great equalizer; it’s a unifier and brings everyone to the table. At barbecue places, you see folks from all walks of life. I love being a barbecue ambassador and having the opportunity to show people the range of barbecue that’s out there.”

Eat, Sleep, BBQ airs on Saturday nights at 9pm ET/PT on Food Network. Featured restaurants and locations can be found at FoodNetwork.com/EatSleepBBQ. Chime in with your favorite barbecue joints using #EatSleepBBQ.

“I hope everyone in Marion County will not only watch the show but set their DVRs to record the whole series,” says Rashad.