Change up your summer menu by adding some wild game.

My son John is an avid sportsman who loves to hunt and fish and enjoys cooking and serving up venison, wild turkey and many varieties of fish for family members and friends.

John started cooking some of my basic recipes when he was in college. After he graduated and got married, he discovered the Big Green Egg outdoor cooker, which can work as a grill, smoker, pizza oven or rotisserie. He also began to explore deep frying, such as wild turkey breast nuggets, and the art of sautéing the fresh fish he would often catch on weekends.

Even though John is now the very busy chief executive officer of our family business, his siblings always joke that he rarely buys any meat because he so loves to hunt and fish. On a recent excursion to our home in the Florida Keys, John brought venison to share with some boat captains and then came home to Ocala with a cooler filled with freshly caught fish.

Over the years, my son has taught me the basics of preparing venison, which some cooks shy away from because it can taste “gamey.” An important thing to know in preparing venison is that the sinewy fat causes the gamey taste, so you should remove that. You also don’t want to overcook it. Another option when preparing any kind of game meat is to soak it in buttermilk overnight to lessen the gamey taste.

Venison sausage is a favorite in our family and the flavor can be changed up with the addition of various herbs and spices. And John’s applewood smoked bacon venison tenderloin entrée, with a stuffing of cream cheese, chives and garlic, has a delicate salty/sweet flavor that is truly delicious.

As for smoking versus grilling, smoking is done at a lower temperature and using hickory chips or applewood chips will enhance the flavor of the meat or fish. Whatever your preference, it can be a fun time to involve family members and guests.

There are a million options for side dishes for grilled and smoked entrées, such as creamy mushroom risotto or a brightly colored and healthy kale salad. And when you serve up some iced tea, beer or wine, along with fresh berries and sorbet for dessert, you’ve got a winning summer combination! 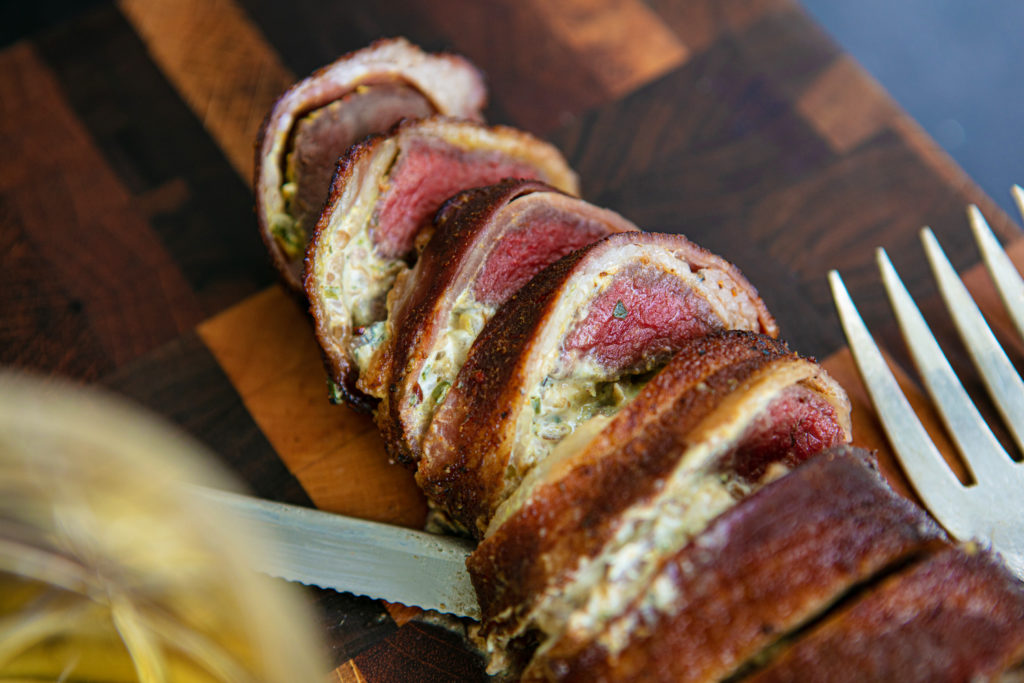 Prepare smoker on indirect heat. › This recipe used applewood chips, but you can use any wood chips of your choice. › Preheat to 350 degrees. › Put all stuffing ingredients into a bowl and blend them well (I like to do this step by hand). › Lay the tenderloins flat on a cutting board and make about a 1 1/2-inch deep slice across the length of the venison, leaving about 1/4 inch uncut on each end. › Stuff the tenderloins with the creamy mixture. › Wrap bacon strips around each tenderloin and secure with toothpicks if needed. › Put the venison on the grill and watch for an internal temperature of 120 degrees; when it reaches 130 degrees, remove the tenderloins from the cooker. › Let them rest for 10 minutes to preserve the juices. › Slice and serve with risotto. 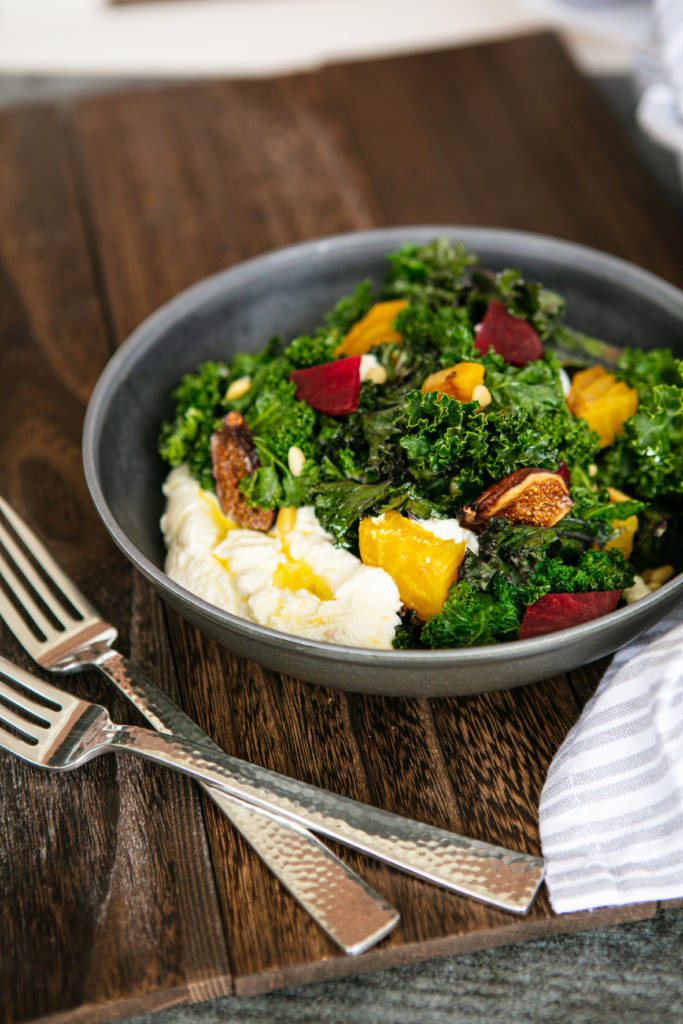 Sauté mushrooms in olive oil over medium-high heat until softened, about 5 minutes, then set aside. › Place shallots and butter in a saucepan and cook until onions are tender, about 3 to 4 minutes. › Stir in the rice and cook until it begins to lightly brown, about 5 minutes. › Add 1/2 cup of wine or broth and stir until the liquid evaporates. › Heat the remaining broth in the microwave or on the stovetop and begin to add 1/2 cup at a time into the rice, stirring after each addition until the liquid again evaporates, which will take about 20 minutes. › Stir mushrooms into the rice and add some of the parmesan cheese (reserve a couple of tablespoons for garnish). › Taste and add salt and pepper as needed. › Garnish with parmesan and fresh herbs as desired.

Preheat oven to 425 degrees. › Toss the beet wedges with 1 tablespoon olive oil and sprinkle with salt. › Spread on a baking dish and roast until tender, about 20 to 25 minutes, stirring occasionally. › Whisk together 2 tablespoons olive oil, balsamic vinegar and maple syrup. › Remove the beets and toss them with the dressing and set aside. › Heat the grill. › Coat the kale leaves with the remaining olive oil and sprinkle with salt. › Spread the leaves on the grill. › Flip once when they begin to get charred and crispy. › If you did not remove the stems before grilling, do so now. › Chop the grilled kale coarsely. › To serve, place some kale, a spoonful of ricotta and some beet slices on each salad plate. › Drizzle with dressing from the beets. › Dress each salad with fig halves and serve. 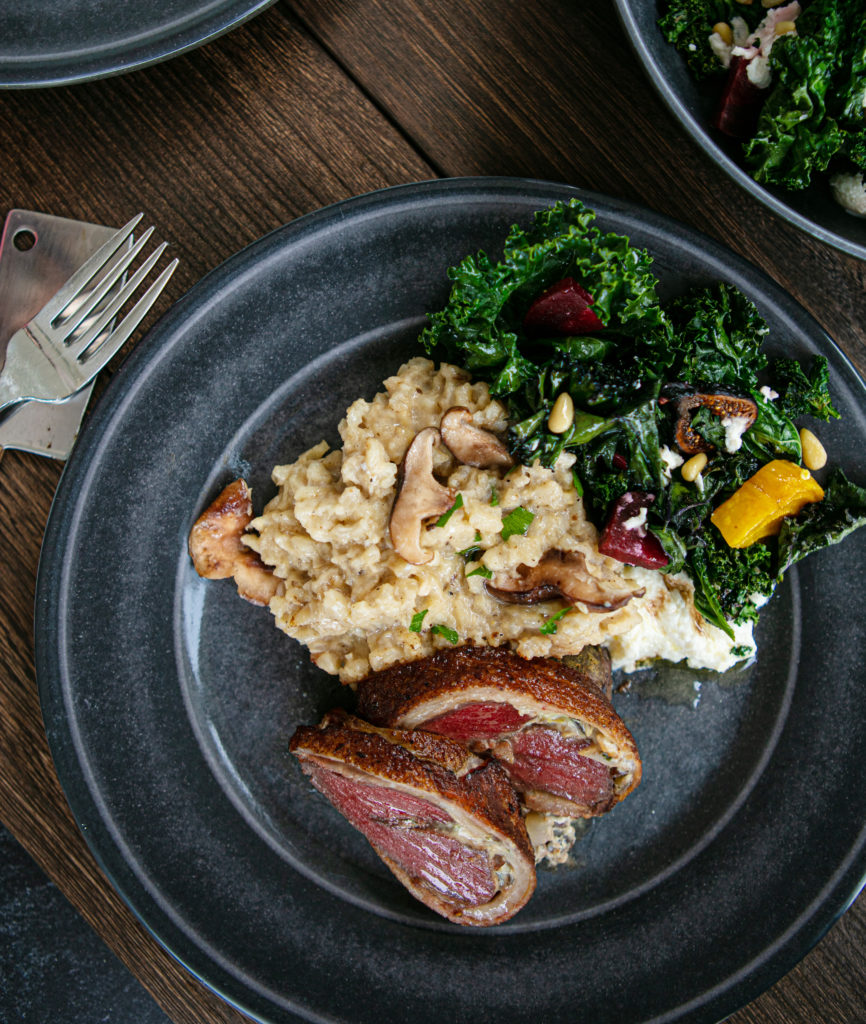