Those lucky enough to be her loved one, coworker or friend are often delighted with the decadent sweet treats she loves to bake and share.

It was while she was a student at West Port High School that Ashley Lopez first started watching the Food Network, began to bake, and discovered that peanut butter wasn’t so bad—especially when paired with chocolate. So it’s no surprise that when we caught up with this busy communications professional, she was baking a chocolate torte topped with peanut butter cream and strawberry jam and a batch of cupcakes made from the same recipe. Her confectionary concoction is as delicious as it looks, which is exactly what she was going for. It’s just as good in its own right as the original inspiration—a “Barefoot Contessa” chocolate cake recipe that always gets five-star reviews. 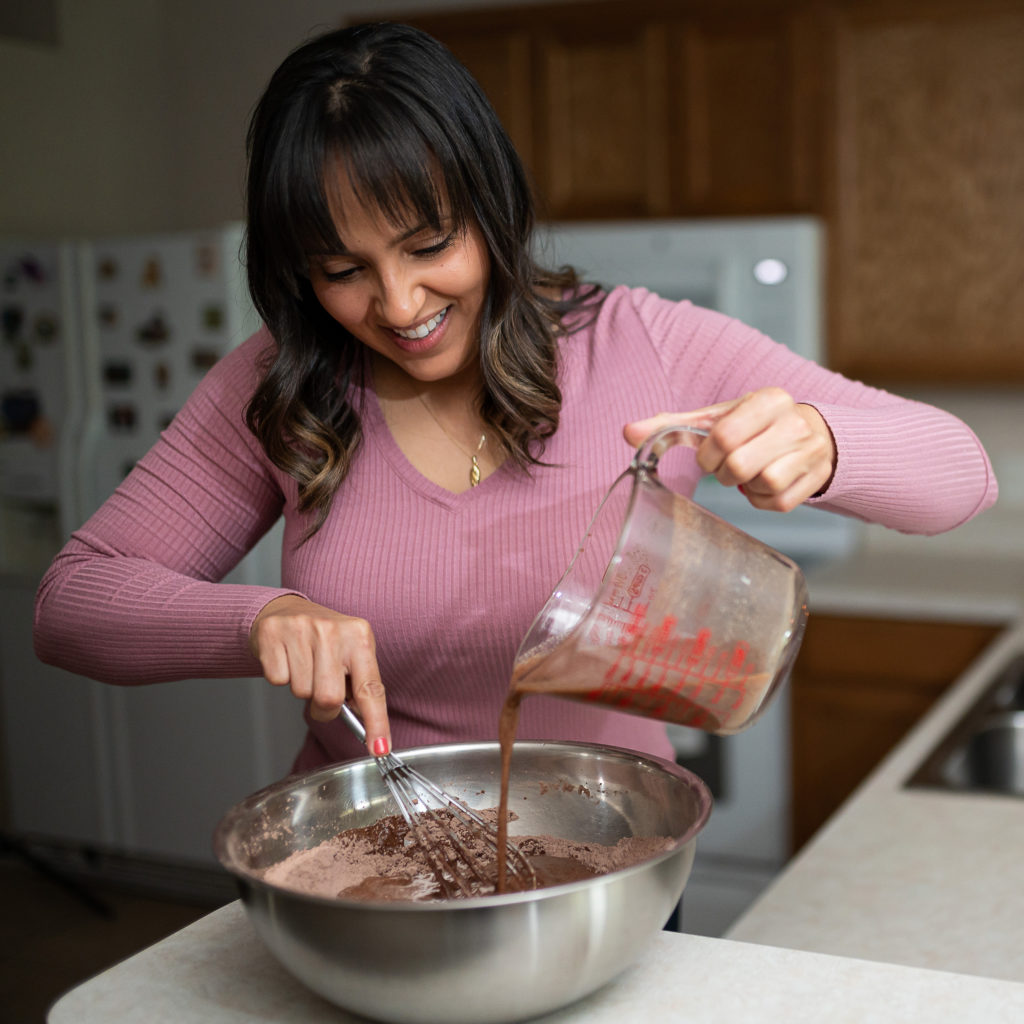 Growing up in Puerto Rico, Lopez says peanut butter and jelly was “not a thing.” She was 15 when her family moved to Ocala, and she was curious about the sandwiches so many of us equate with childhood.

“Peanut butter is delicious,” she admits, “and, of course, Reese’s cups—everyone adores. The whole peanut butter and chocolate combination, you can’t go wrong with it.” Not even if the cake is vegan.

That’s right; she made this moist, fudgy cake with the sweet, fluffy peanut butter cream icing without eggs, milk or butter so her vegan grandmother could enjoy it. But there’s no doubt the firefighters she works with would devour these cupcakes—and probably would never detect her clever, health-conscious substitutions.

“My grandma loves the treats, and so do the firefighters,” she says with a smile. After six years working as the public information officer for Ocala Fire Rescue, Lopez is known at the fire stations for the cupcakes she likes to share. Baking for her colleagues is one way she can show her appreciation for these first responders, and it gives her a chance to experiment with new flavors, such as the chocolate cupcakes with peanut butter icing and bacon she brought in for Father’s Day.

“They had the sweet and salty thing going on,” she offers.

She still gets requests for the chocolate mint cupcakes she brought at Christmastime, and is currently trying to figure out how to fulfill a new request she got last month.

“Due to the pandemic, we’re discouraged from visiting the station unless we have to,” she explains. “I saw some of the firefighters I hadn’t seen in a while.”

“When are we getting ‘We survived COVID’ cupcakes?” one firefighter asked. “What flavor are they going to be? We need cupcakes!”

“I’ll probably make some kind of a citrus cupcake,” she muses. “It will probably be a vanilla cupcake with lemon curd inside. I can make either meringue icing or citrus frosting. I have made a citrus mascarpone icing that was pretty good.”

But, unless someone requests it, Lopez isn’t likely to repeat a recipe very often. 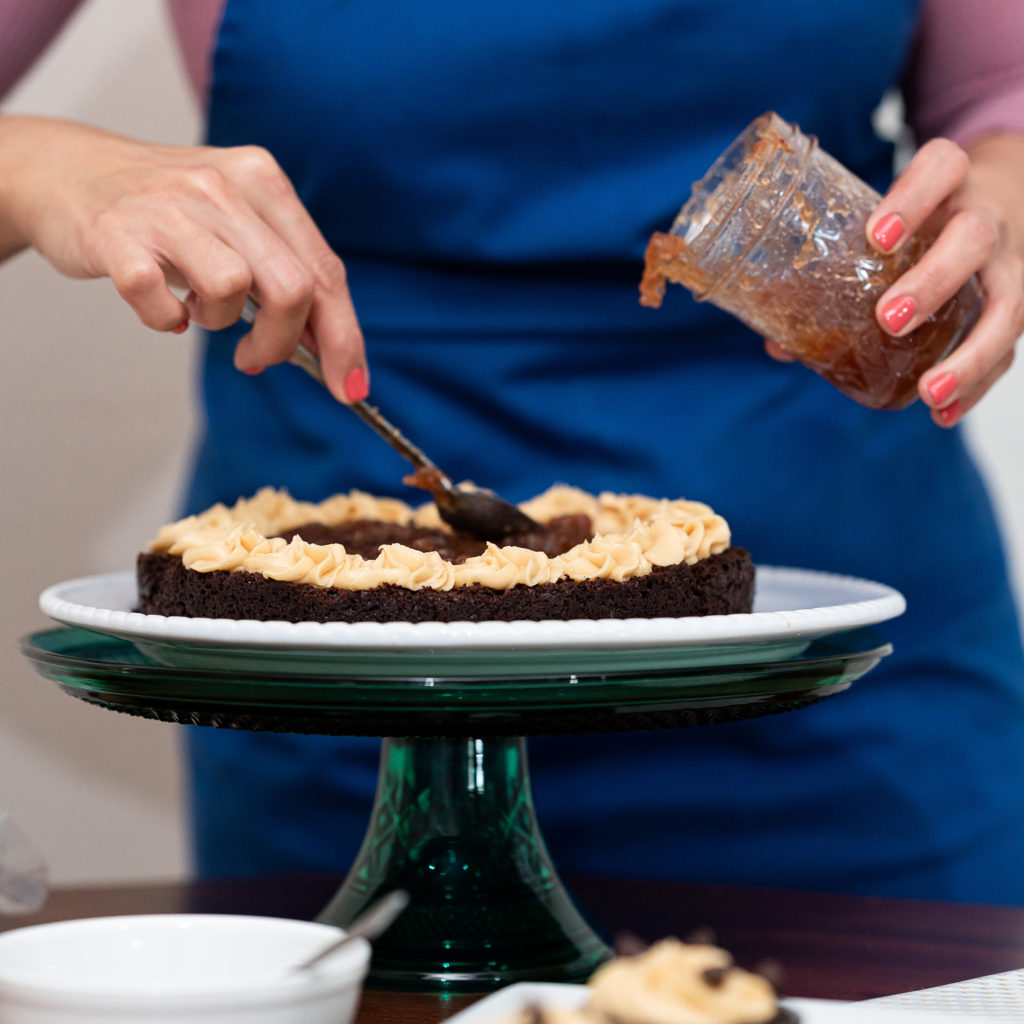 “I like that I can get creative,” she reveals, adding that she likes to “change things up.” Some of her best recipes have resulted from experimenting with a special ingredient such as the chai tea she substitutes for a family member who doesn’t drink coffee or the coconut jam and Medjool dates that can cut down the amount of refined sugar needed.

“I feel very blessed because, with the changing times and people trying to eat healthier or whole foods, I have had some exposure to ingredients I wouldn’t have otherwise,” she notes, but adds that while “aesthetics are important, it has to taste delicious.”

Finally, while she values the process of baking as a creative outlet, Lopez believes there is one ingredient that is “inevitably reflected on the plate” and that is love.

“I do believe that in order for this or any recipe to be successful, you need to put your heart into it.”

This two-layer cake can also be prepared as cupcakes—see variation at the end of the recipe. 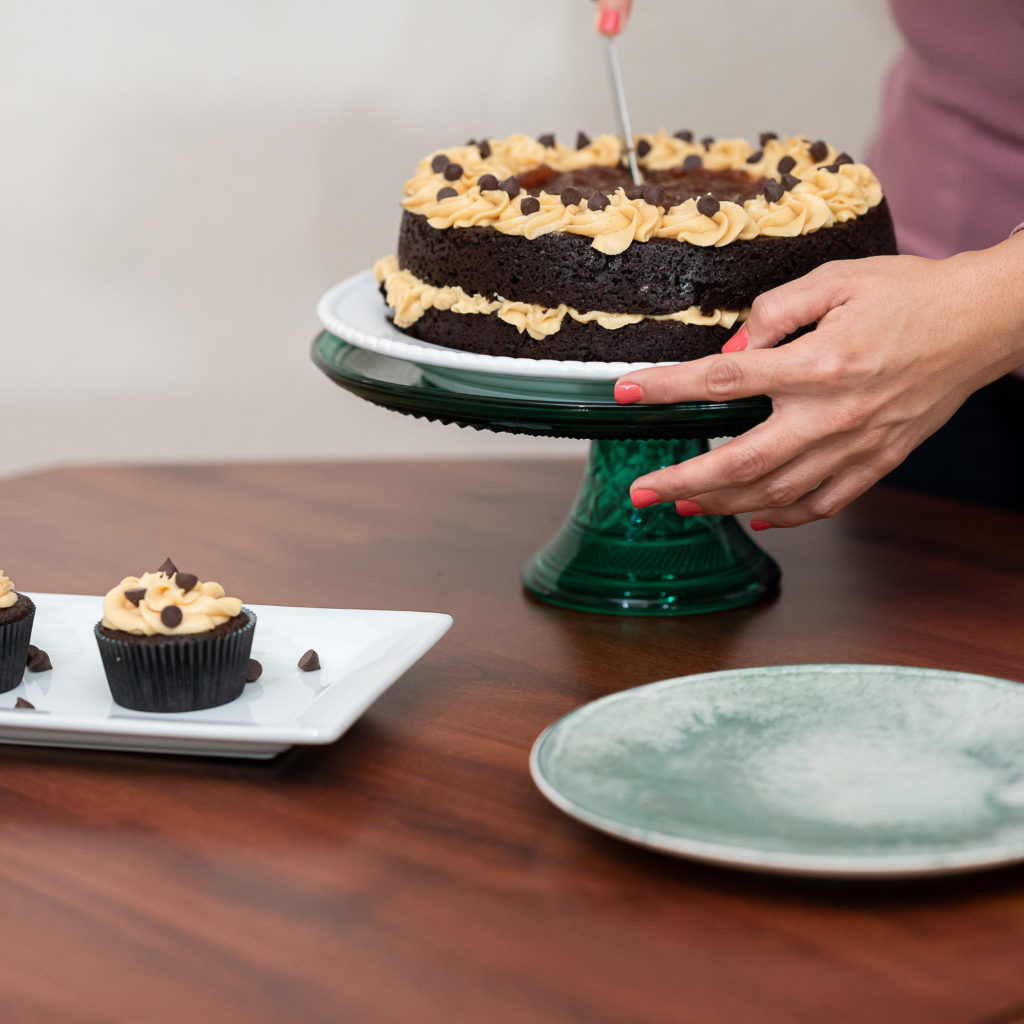 Preheat the oven to 350 degrees.
› Line two 9-inch pans with parchment paper and spray with cooking spray.
› Sift the flour, cocoa powder, baking soda, baking powder and salt into a large bowl.
› Add sugars to the dry ingredient bowl and whisk until combined.
› Pour vinegar into a measuring cup.
› Fill the measuring cup with the vinegar with soy milk until the liquids reach the one cup mark.
› Set aside.
› Brew a cup of tea (or coffee).
› Add the chocolate chips to the hot tea, allowing them to melt.
› Set aside.
› Combine all wet ingredients in a large bowl.
› Add the wet ingredients into the dry, mixing as you pour.
› Pour batter into prepared pans and bake for 20-25 minutes, or until a toothpick inserted in the center comes out clean.
› Cool cakes in the pans for 30 minutes, then turn them out onto a cooling rack and cool completely.

In the bowl of an electric mixer fitted with a paddle attachment, cream room temperature margarine until light and fluffy (approximately 3 minutes).
› Add the peanut butter.
› Mix for 30 seconds.
› Pour the sifted powdered sugar in batches, mixing in between each addition to prevent splatter.
› Finish with a pinch of salt. 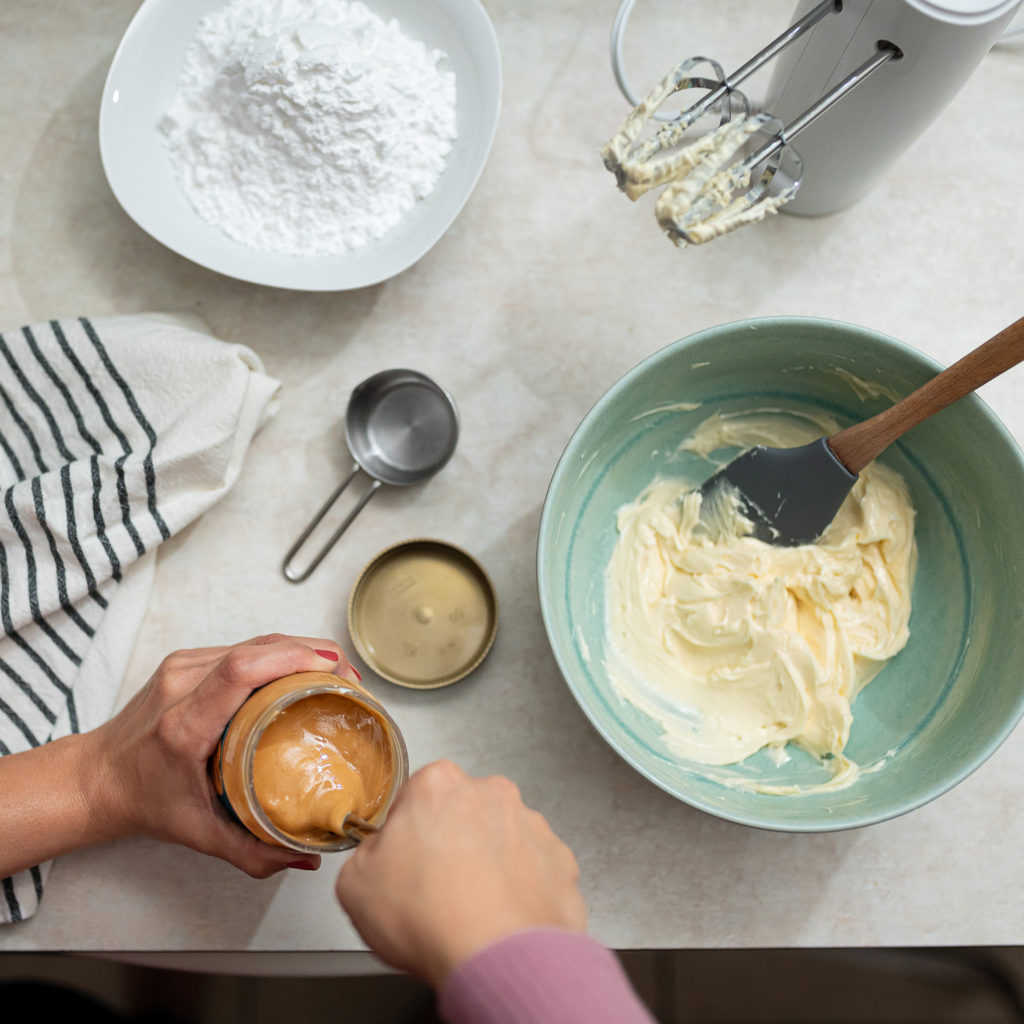 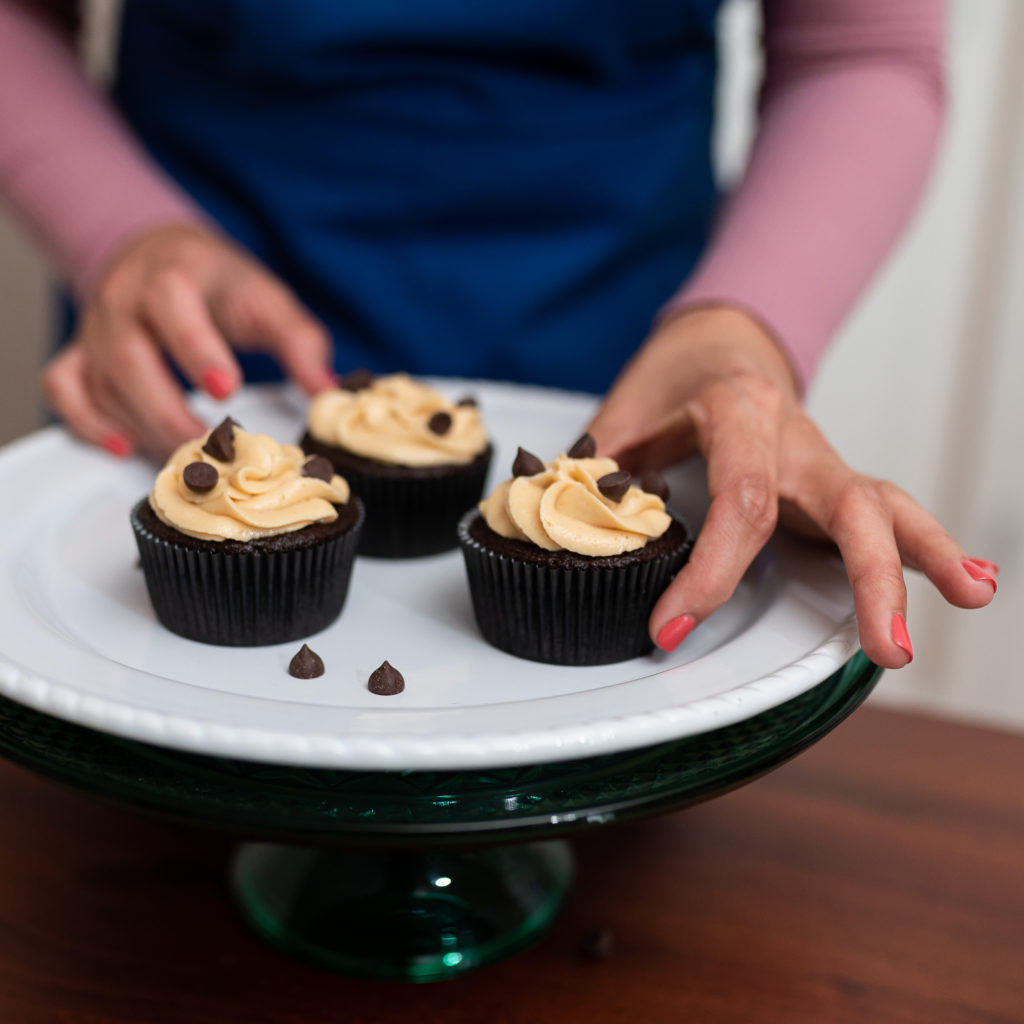 Assembly
Level the cake layers, and place the base layer on the serving platter/cake stand.
› Fill a piping bag fitted with a rosette tip with the peanut butter “butter” cream. Pipe a ring of rosettes around the top edge of the cake, creating a dam for the jam.
› Fill the ring of rosettes with a generous amount of strawberry jam.
› Place the second layer of cake on top.
› Repeat the piping and filling process.
› Finish with a sprinkle of chocolate chips along peanut butter rosettes, if desired.