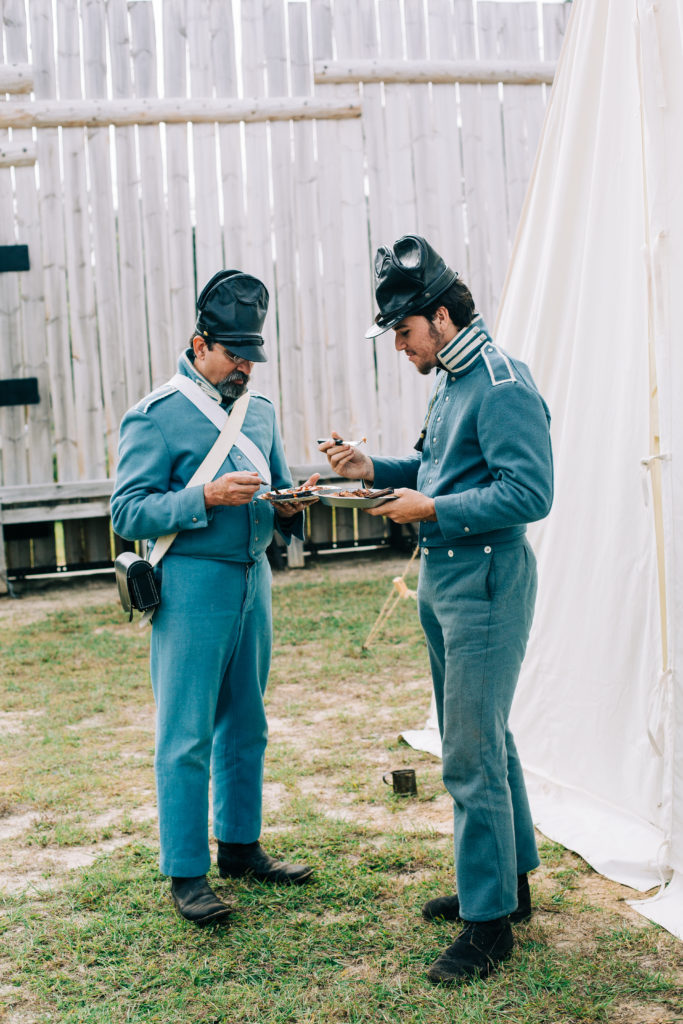 Bill Rodriguez cooks the way he was taught by his father, who was raised on a farm in Cuba.

“He grew up ranching and hunting and basically doing the exact same thing we’re doing today,” Rodriguez explains. “My father taught me at a young age, I’d say from about 3 years old, myself and my siblings all hunted. We all grew gardens and he taught us how to process everything. It’s something we continued through our life and with our own kids.”

The outdoor skills he learned as a child have served Rodriguez well—through his career as a federal ranger with the National Park Service, and now as Parks Division Head for the City of Ocala, where, among other duties, he oversees the annual A Fight For Freedom: Attack on Fort King reenactment. Over the four years the city has offered this event, his role has expanded, but his favorite place is still the camp kitchen.

“This is quite a different kitchen than you’re used to seeing,” he says, standing under a canvas tent inside the fort. “This is our stove, this is our oven, this is everything,” he says of the enormous metal grate over the fire.

With the exception of this year, which featured a cooking demonstration, Rodriguez has prepared a meal for the dozens of reenactors that brings a historically accurate culinary experience to life for the participants. The meal typically features at least a quarter of venison or an entire hog. The long process begins the day before.

“One of the things I like to do with the pork is the same thing I do at home,” he reveals. “I marinate it for 24 hours in what’s called mojo—a citrus, tropical wet marinade. It’s got a lot of lime and three different types of citrus. Citrus is excellent to break down the meat and the fibers in that protein. It helps infuse the flavor.” 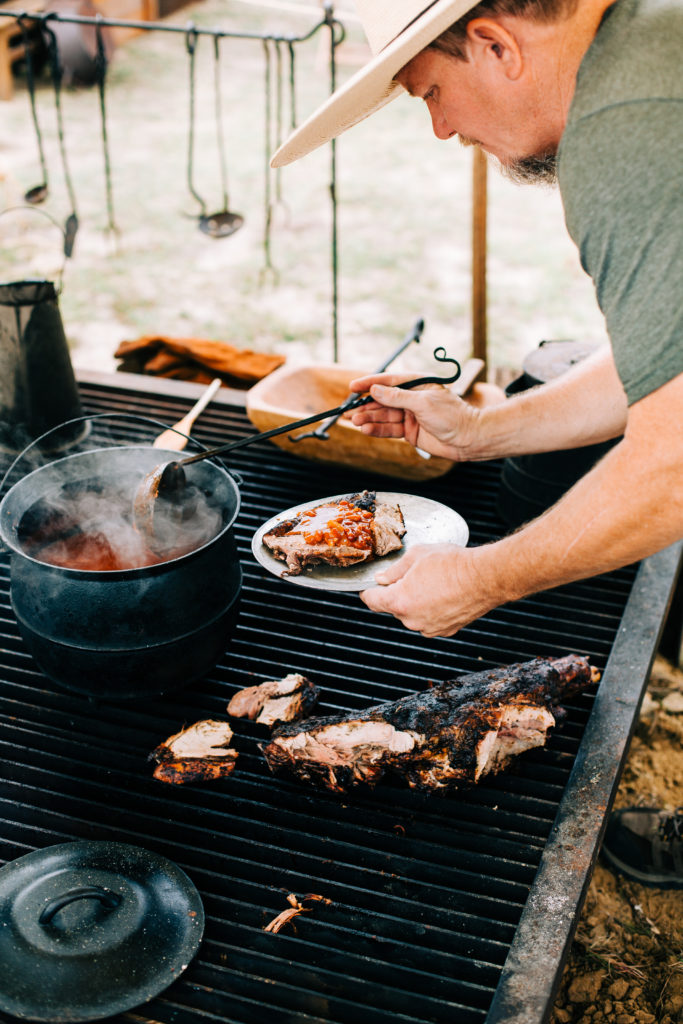 When he cooks for a living history event, Rodriguez aims to keep the meal authentic. At the 2019 Attack on Fort King event in December, he prepared a quarter hog that came from a “wild boar that was up and walking two days before.” It was provided by a volunteer who hunted it at Wacahoota, on the Marion-Alachua county line. Rodriguez explains that pork would have been commonly served at the fort, because pigs grow and reproduce quickly and don’t require any special feed. The cooking fire was created with oak logs.

“One hundred eighty-three years ago you wouldn’t have a great big elaborate meal, you’d have something simple,” he explains. “We don’t go looking for some extravagant spice or some extravagant wood; you’ve got to work with the resources you have. When the fort existed here there wasn’t a lumber mill so they had to supply their own wood. It would have been oak that they used.”

Using period-authentic tools such as a blacksmithed turning fork, cooking a quarter hog is at least a four-hour process of continually checking the texture of the seared meat, rubbing it down with oil and re-seasoning and moving it often to keep the thicker portion directly over the fire while being careful not to burn the thinner end of the roast.

“The biggest issue we have to deal with here is the heat because you can’t keep it consistent. The other element you’re fighting is the wind. I am looking to constantly keep the red-hot coals in the center and to keep wood that’s burning on the inside but still dry on the outside.” 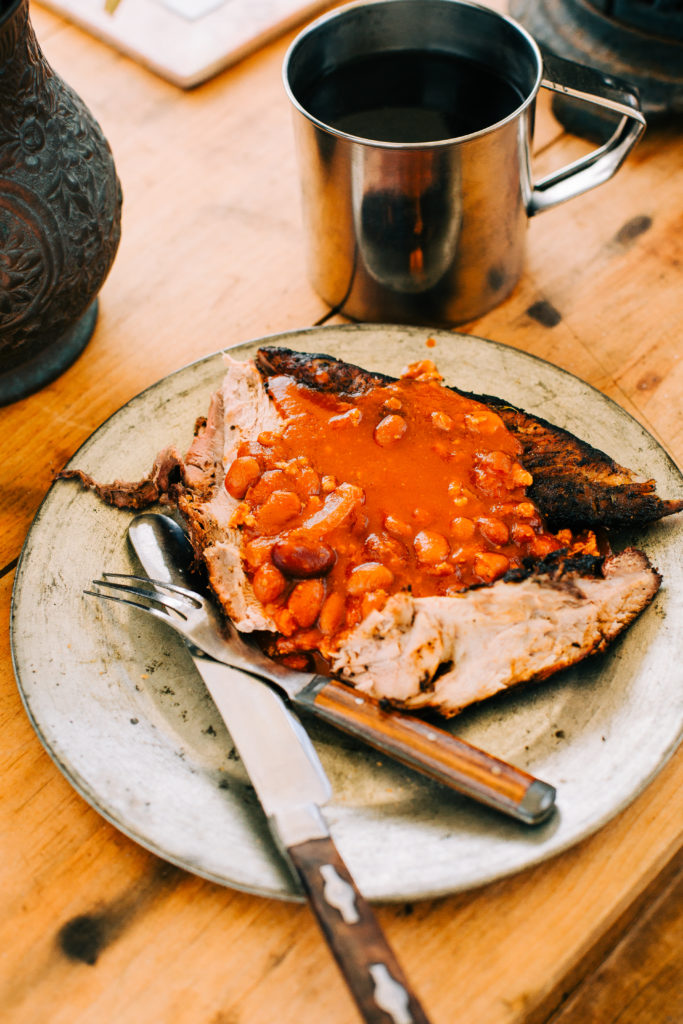 Cooking over an open fire may be a labor-intensive process, but Rodriguez says it’s always worth it. “I think the flavor is much better,” he asserts. “It’s drastically different. Believe me, by lunchtime it will be gone in 30 minutes.”

To round out the simple meal, Rodriguez serves his flavorful entree with baked beans, rustic bread and black coffee.

Although he’s careful to stay authentic when cooking at the fort, Rodriguez says it’s exactly the same way he prepares family dinners in his backyard. “Everything we have at the house for the most part matches what we have here. At Thanksgiving we cook a whole pig and we do the same at Christmas.”

He enjoys cooking for his family, sometimes as many as 40 people for a holiday gathering. The best part? Passing on his family’s traditions to his 14-year-old son Gavin. “He’s all into it,” Rodriguez says of his youngest child, who also is his camping, hunting and fishing partner. “He loves to cook.”

“We joke and have a good time as we’re prepping our food,” says Rodriguez. “Cooking is good quality time spent together.”