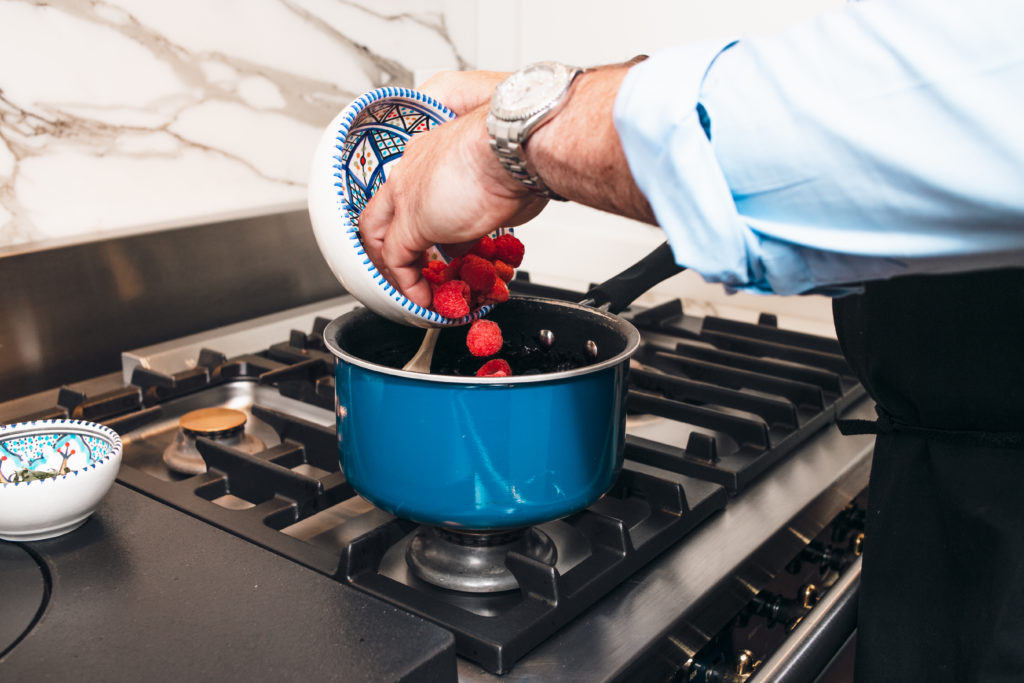 A classically elegant carriage pulled by a beautifully collaborative team of four horses evokes a sense of Old World nobility, especially with Weber, America’s most celebrated combined driving athlete, in a formal top hat, classic riding jacket and tie, at the reins. The Ocala native, who travels the globe competing at the world’s top levels of four-in-hand driving, honed his cooking skills as a Cornell University student spending a semester abroad at Switzerland’s famed École hôtelière de Lausanne hospitality management school. So, it’s only natural that his favorite dessert to prepare is a variation of classic meringue—historically a favorite among French royalty. Pillowy-soft Pavlova is so light it was named after renowned Victorian-era prima ballerina Anna Pavlova.

However, his motive to first make meringue was actually quite practical.

“The reason I got into making Pavlova is because I like to make artichokes with hollandaise sauce,” he explains. “But hollandaise calls for three egg yolks and not the white, so what do you
do with the white?”  The answer, of course: Whip the egg whites into meringue.

This time of year, the dessert is made even more special when topped with fresh local strawberries.

“It’s strawberry time of year in Florida, so it’s a very pretty dish,” Weber says. In May, he switches to fresh blueberries he grows on his farm.

In addition to blueberry bushes, he has grapefruit and orange trees, as well as a lemon tree a friend gave him, that produces the “great big, huge, massive lemons bigger than a grapefruit,” discovered on Italy’s Amalfi Coast. In Weber’s garden you also can find herbs, including mint, which Weber says is easy to grow in the local climate. He considers himself lucky to live in our area, with its ready access to fresh seafood and produce, and he’s a big believer in eating fresh, seasonal foods. 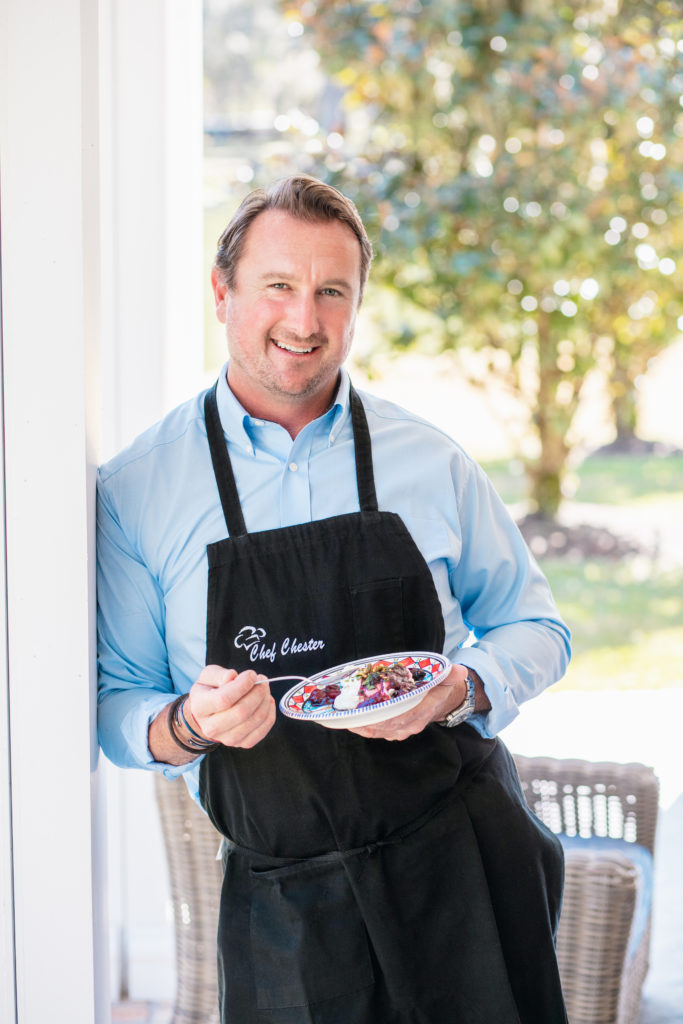 “With all the markets, we have no real seasonality anymore to our food. We used to eat root vegetables in the fall and winter and things like cabbage and Brussels sprouts and asparagus at different times of the year. Now it seems like you can find those items all year round. But if you have a little knowledge about when things are in season, they’re definitely better at that time of year.” And, he adds, vegetables from the average grocery store are “not the same as if it were grown in somebody’s garden and grown with TLC.”

TLC in the kitchen is something that is in his blood. Weber is a member of the family behind the beloved Campbell’s Soup Company brand. Their popular varieties have been enjoyed by generations and recognized around the globe by their iconic cherubic Campbell kids and “M’m! M’m! Good!” slogan.

That same tender loving care might just be the secret ingredient in the fresh, healthy meals this athlete prepares, not just to enjoy with sons Douglas, age 5, and Hugo, who’s 2 ½, but for the other award-winning athletes living at his farm—the world-class horses.

“Their diet is really not unlike how many people are eating now,” he offers.  “It’s much less processed. We buy basic ingredients—oats, barley, beet pulp and flaxseed—and we cook it up fresh for them.”

He moves confidently and purposefully around his bright, open kitchen with its large center island. It’s the perfect place to socialize and hang out with friends and family as Weber whips up his favorite dishes and experiments with new recipes, evidenced by several shelves filled with well-loved cookbooks.

“I actually cook a little bit with my boys,” Weber says with a smile. “My 5-year-old likes to get involved and cook a bit with Dad. He gets on his little stool. I give him assignments that he’s going to be successful with. That’s a lot of fun.”

After a day of racing a team of powerful horses, this equestrian savors the opportunity to slow down and unwind—donning an apron and sneakers—and retreating to the kitchen.

“I think it’s a little bit like therapy; the day is done and I’m working on something else,” he explains. “It’s truly enjoyable to cook at the end of the day.” 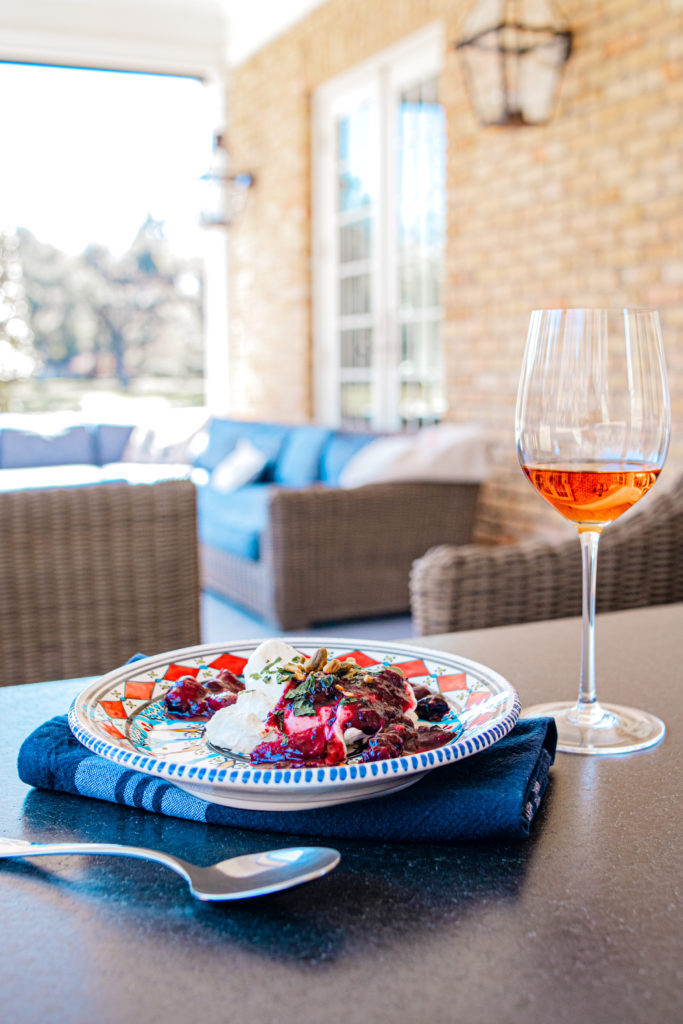 Preheat oven to 250° and line a baking sheet with parchment paper.
› In a large mixing bowl, beat egg whites with a pinch of fine sea salt until foamy. While beating, slowly add in sugar and continue beating until the meringue begins to thicken. Beat in cream of tartar and cornstarch until the mixture adheres firmly to a spoon.
› Place six mounds of the mixture on the baking sheet.
› Bake for one hour, rotating the pan after half an hour. If browning too quickly, lower temperature. Let the Pavlovas cool down inside the oven after heat is turned off.
› Meanwhile, put all the berries into a saucepan and slowly simmer until the juice begins to thicken (using additional cornstarch if needed).
› Beat the whipping cream until stiff and fold in sour cream.
* Optional: At any stage, add sugar and/or vanilla extract to personal taste.

To serve (best done same day), place one Pavlova on a dessert plate.
› Place a couple of dollops of cream mixture on top.
› Drizzle berry compote over the plate.
› Finish with fresh mint.
› Top with crumbled pistachios.