We spend some time with James McCune, Marion County’s Administrative Judge of the Fifth Judicial Circuit 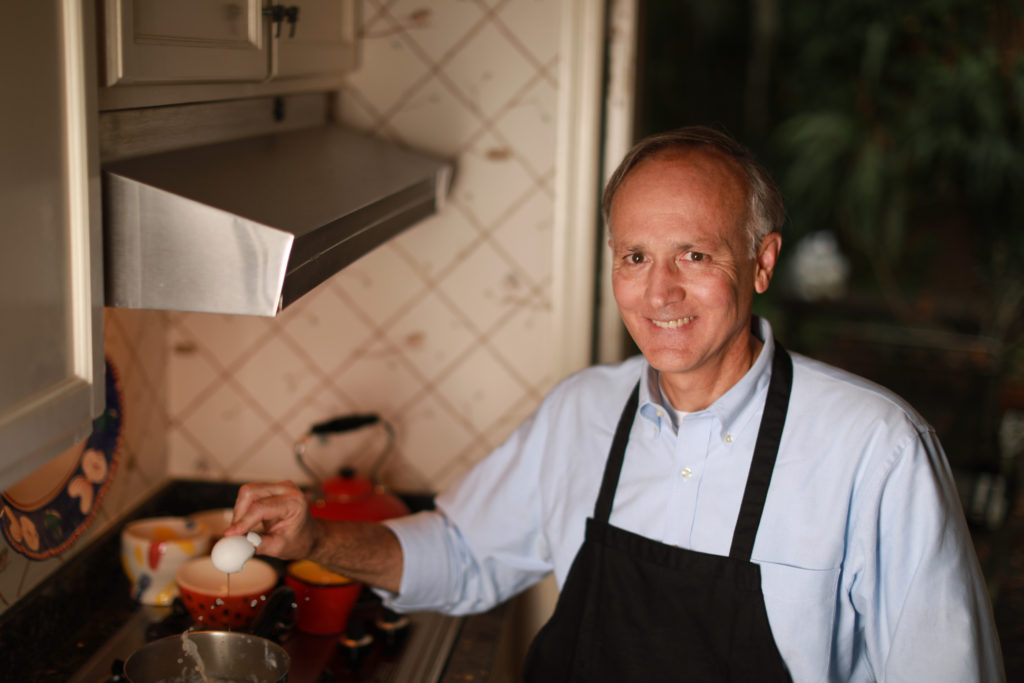 Judge McCune has a congenial nature that makes you feel instantly at ease. He is a serious, yet passionate man with a great big love of food, so much so that he repeats some version of “I really do love to eat!” five separate times during our visit—a visit that began with a fascinating culinary oration, in which he extolled the many virtues of food, some treasured memories and favorite dishes. And although he readily admits to not being much of a cook himself, his passion for food runs deep.

“For me, food is about relationships and occasions,” he explains. “Food is also communal in that it often takes place with other people. That adds real value and significance to the food itself.” McCune is quick to point out the distinction between eating and actually dining.

“Eating is just throwing fuel in the car to get down the road,” he asserts. “Dining is making a moment out of it and savoring it. Whether that be the preparation, the aromas or the fun that can be a part of the process. And food has an element of magic to it. Two people can take the same recipe and the same ingredients and have totally different outcomes.”

That same magic can be traced back to his parents’ desire to give him and his siblings a childhood rooted in experiences and traditions.

“It was very important to my mother in particular, who had grown up as an only child, that we hold our evening meal as almost sacrosanct,” he recalls. “We were expected to be home every night from 6 to 6:45 for dinner. There were no phone calls or TV allowed. It was just us sitting around the table. My mom put so much effort in—it was part of her love language.”

When asked about some of the memorable meals they shared over that table he says, “My mother’s Spanish rice, her stuffed flank steak and her chili are some of my favorites. I’ve actually been judging the local chili cook-off that happens every fall, and people bring in all these different entries. I like to see what they’ve come up with and appreciate it, but in the back of my mind I think, ‘It’s just not my mom’s chili,’” he confesses.

Over the course of our chat, he calls out two other favorites.

“My mom’s meatloaf and mashed potatoes. So good!” he says longingly. “And her Key lime pie! When I think of any one of those, it brings a smile to my face.”

And although his mom was the principal cook during the week, his late father had his own impressive set of culinary skills.

“He grilled all weekend. And every Sunday when we’d get up, Dad would make us eggs and bacon, pancakes, waffles or French toast,” McCune recalls. “When we get together for our family reunion every year, we all have breakfast together. My dad also made what he called Eggs McCune, which is basically a poached egg with a piece of Canadian bacon and this special cheese sauce on an English muffin. Now we make it together as a family. I’m the egg poacher!”

Another family tradition for the McCunes were birthday dinners.

“If it was your birthday, you got to choose what you were having and where it was going to be, either at home or out at a restaurant. Those dinners were really special for us kids but also for my parents,” he says. “There’s this one funny memory I have about a particular birthday dinner we had for my dad. My brother and I had taken it upon ourselves to make the cake. When it was done, I’d say that thing was probably more frosting than cake, as half of one of the layers was still stuck in the pan. As you can imagine, the top of the cake was really sloped, and so I got an extra can of frosting and tried to make it look even and smooth. We had no idea how old he was, so we had a mess of candles all over it. And then the moment came, and my brother turned off the dining room lights. I walked through the swinging door, between the kitchen and the dining room, and somehow I stumbled. The cake fell and hit my Dad first on his chest and then tumbled down into his lap,” he recalls with a laugh. “I’ll never forget seeing that mess in his lap and one solitary candle still burning.”

“Thanksgiving dinner! It’s my favorite. And probably, if I thought about it, it’s not because turkey is the tastiest stuff in the world. It’s the association to all the memories of our family gathered around the table and the joy in the room. My parents would start with the turkey around 6 [o’clock] in the morning, and as the day would go on, they would be cooking, and that smell—I’ll never forget it. I wish I could replicate it in a spray.”

His good table manners he credits to his grandmother.

“My nana made a point of wanting us to learn proper manners and etiquette at the table,” he reveals. “It was things like, when you’re a guest, you let the hostess go first and you take your cues from her. It’s not as though we lived like Downton Abbey or anything, but there’s something to be said for good table manners.”

She was also a formidable cook in her own right.

“We grew up in New Jersey, and my nana used to come from Indiana to visit about four times a year,” he recalls. “When she’d come, she’d make this one dish that her grandmother taught her to make. It was pan-fried steak with milk gravy and sliced potatoes. It was strictly meat and potatoes, ‘stick to your bones’ and just the best thing in the world on those dreary winter nights. The house would be filled with this wonderful aroma. She’s been gone a long time, and I haven’t had it in so many years, but I will remember that forever.”

As for fresh culinary adventures, “After 20 years of marriage, my wife, Jessica, and I have been doing something new,” he reports. “We order meals from a company that sends you this box with all the pre-measured ingredients and these elaborate instructions,” he explains. “Some are simple, and some are more complex. We’re getting better, but it’s been a bit like the Keystone Cops at times. It’s been a fun adventure for us, but we’ve had some frustration as well. We’re definitely willing and able to survive a few more sessions of cooking like that together!”