Making buttery and mouth-watering Tiropitas is a Greek heritage passed down through generations.

There is love and tradition in every buttery brush stroke as Paula King deftly fills fragile phyllo sheets with a decadent cheese mixture and gently folds them into triangle shaped Tiropitas. 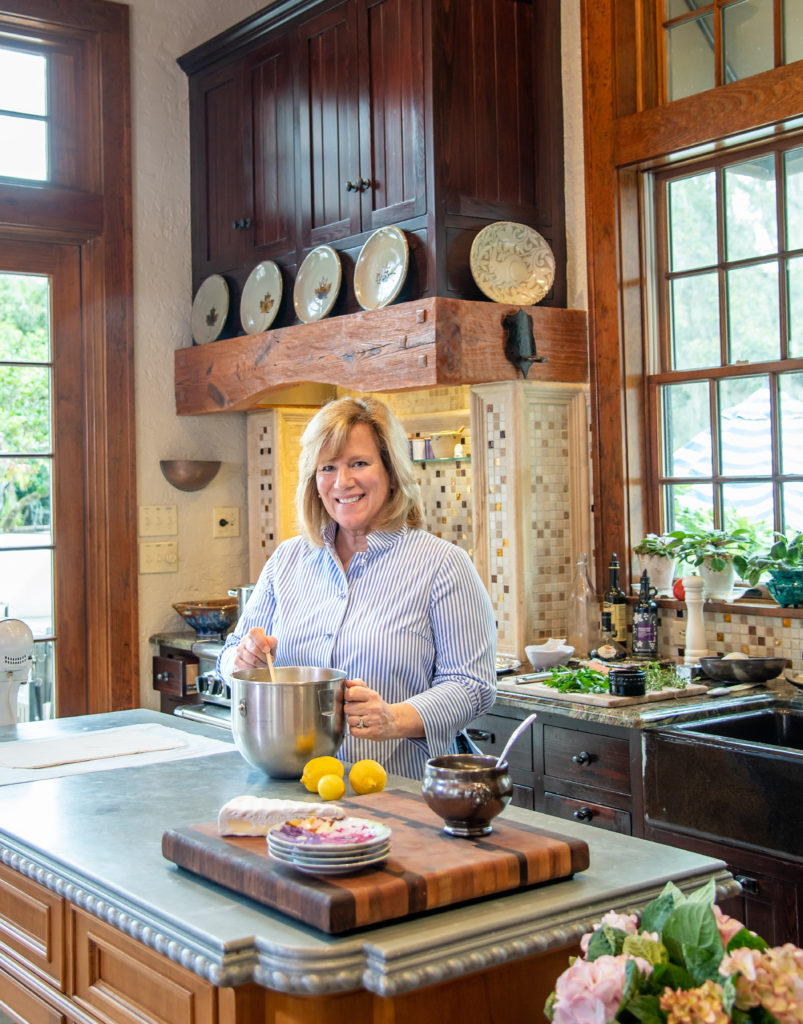 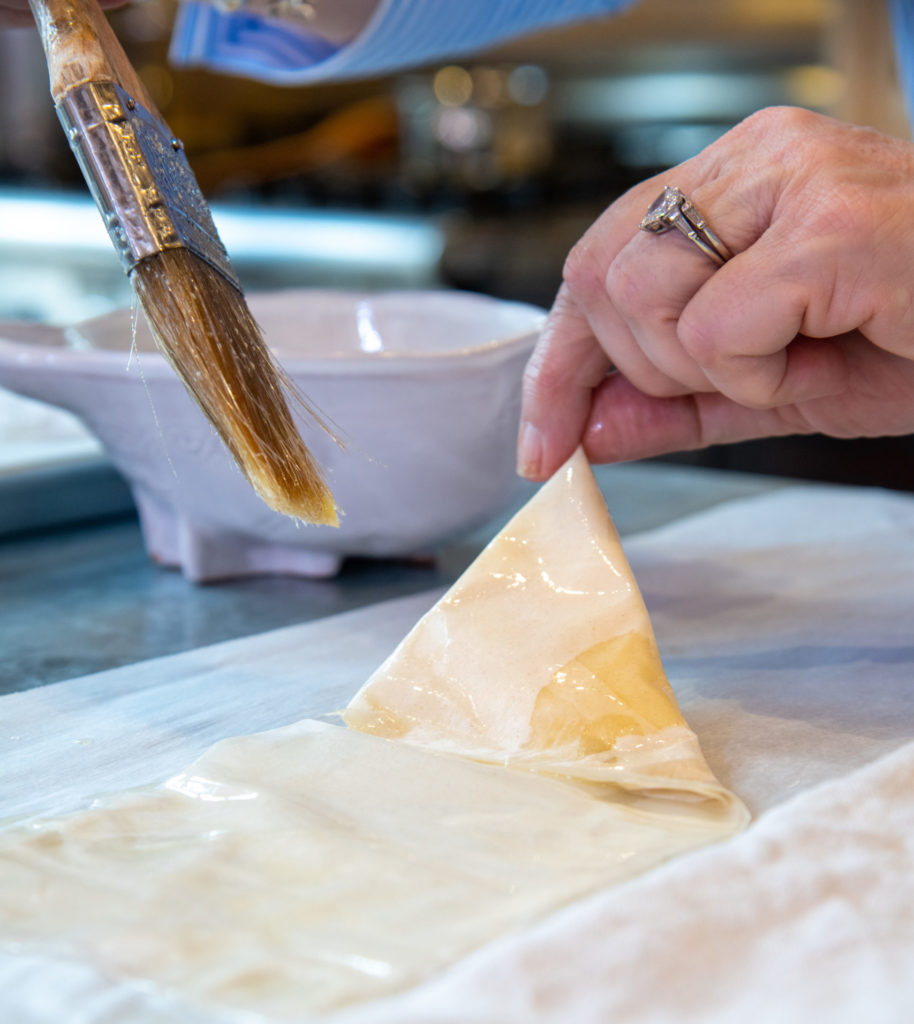 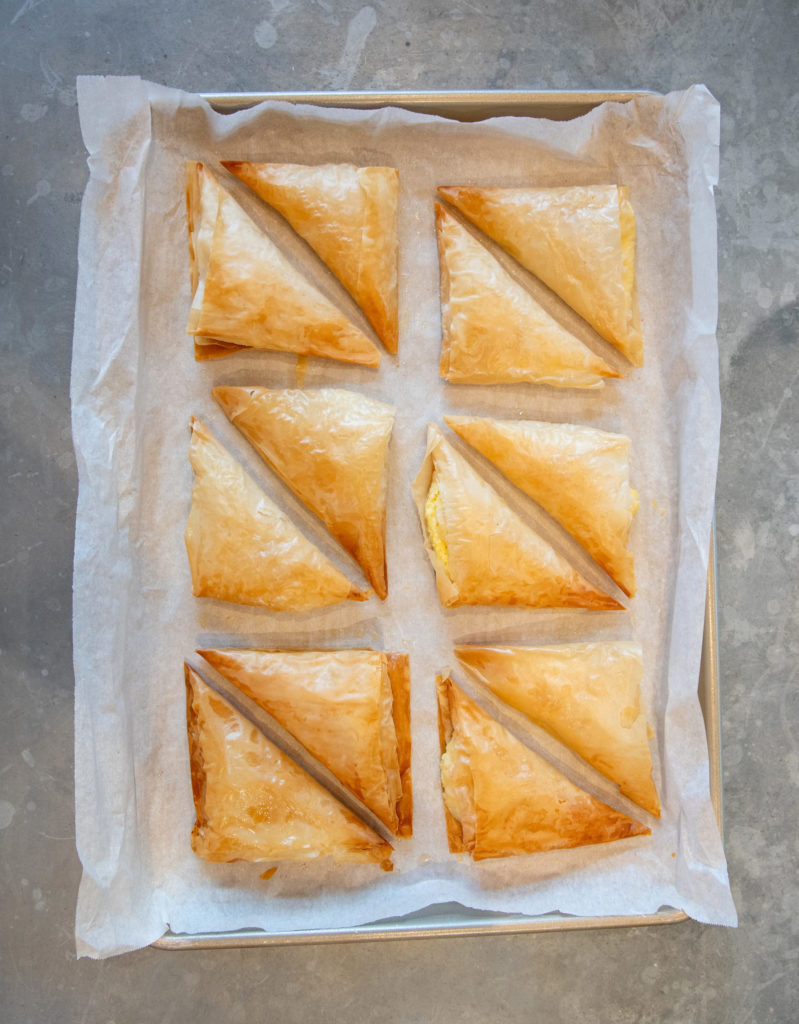 “This is just part of growing up Greek,” she says as she places a Tiropita on a cookie sheet and brushes on yet another layer of melted extra creamy butter. “I have a Greek mother, so if you grew up in a Greek household, this is part of the drill.”

King is well known for her Agapanthus gift and lifestyle shops in Ocala and Gainesville, and for her longtime civic involvement, including co-founding the very successful Horse Fever public art endeavors. She was born in Maryland aft er her mother’s parents came to America from Cyprus in 1927.

“My Mom was born in Astoria, which is the Greek part of New York, in 1932,” King offers, adding that her family later moved to Orlando.

After living in Kentucky and California, King came to Marion County in 1989 when her husband, Dr. Charlie King, left the Air Force and began his medical practice in Ocala. Their family grew to include a son, daughter and granddaughter. She said she is passing on her Greek heritage and prowess in the kitchen to them—as is tradition.

“You learn to make Greek pastry and it becomes a ritual especially over the holidays, when everybody argues about whose recipe is the best,” she shares. “You learn it from your Yiayia and I’m a Yiayia now, so I look forward to teaching my granddaughter.”

In addition to mastering the art of making flaky Tiropitas that melt in your mouth, King also cooks up a healthy and very delicious Manhattan Style Fish Chowder with Garlic Toast.

“This was a recipe given to me by my ‘Aunt Kitty,’ a nice Greek lady who was a childhood friend of my Mom. She was a naval officer’s wife and did a lot of entertaining all over the world,” King recalls. “She was always giving us recipes and she took this one out of a magazine. Since that time, I’ve found that we like more expanded flavors, with spices and herbs, so I up the game on the seasonings in this. The thing I like about a stew is that anybody can make it and you make it to your own taste.”

She also recalls the time the Kyiv Symphony Orchestra came to perform in Ocala and she and her husband were asked to host a morning meal for some of the choral singers. They were told that the entertainers didn’t care for American breakfast foods, but rather something more hearty.

“So, this was the fish chowder I made for them and they were very happy with it,” she offers. “Yes, we served it to them for breakfast!” 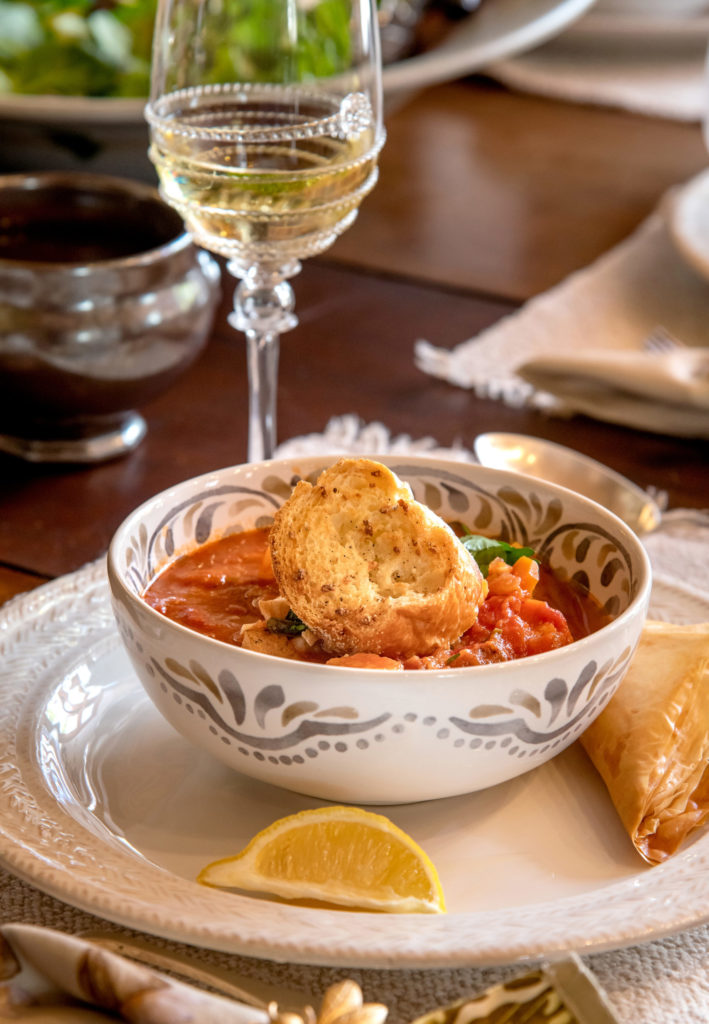 As King peels and crushes fresh garlic to make a buttery spread for the toast to top the chowder, she explains that her home and kitchen are filled with items she has collected, as well as gifts and works of art made by friends or found at the annual Fine Arts For Ocala art show.

“My tables are always a mix of wedding presents and things I’ve acquired over the years, gifts, and I do like to mix and match things and, of course, I do own two shops,” she says softly as she picks up a large silver spoon that she says is similar to a size found in Europe and is perfect for this “chunky” chowder. “This was my mother-in-law’s silver. It is really pretty and every time we use it, I think of her. Everything here and in my shop reflects what I call ‘Ocala life.’”

King adds that the slogan at Agapanthus (which means flower of love in Greek), which she started in 2007 in Ocala and expanded to Gainesville in 2013, is “Beauty every day.”

“The queen is not coming,” she says with an infectious laugh, “so just go ahead and use the silver and china!”

Blend all of the cheeses in a mixer. › Cook the farina in 1/2 stick of butter over low heat until it begins to bubble. › Beat the eggs. › Add the farina and eggs to the cheese mixture and blend well. › Cut the phyllo sheets in half lengthwise and stack them up (if the sheets are large, cut into thirds). › Keep covered with a tea towel as you work to retain moisture and prevent tearing. › Lift two pieces of phyllo and lay them to one side of the parchment paper. › Gently brush melted butter all over the pastry dough. › Put a healthy teaspoon of the cheese mixture on the bottom of the sheets and make one diagonal fold as if folding a flag. › Brush the top of the fold with butter, then fold again, brush on more butter and repeat until you reach the end of the triangle. › Place each Tiropita on a parchment-paper lined cookie sheet. › Bake at 350 for 15 to 20 minutes. › Best served warm. Note: Prepared uncooked pieces can be chilled on a cookie sheet and then be frozen, separated by waxed paper, to be popped into the oven later.

Scrub the potatoes, leaving the skin on, and cut into  1/2-inch cubes. › Dice the carrots, onion and celery. › Saute the vegetables in a Dutch oven in two tablespoons of butter for about five minutes. › Add the V8 juice, stewed tomatoes and potatoes, along with 1/4 teaspoon salt,  1/4 teaspoon thyme, 1/2 teaspoon parsley and a dash of pepper. › Bring to boil, then reduce heat and simmer uncovered for 15 minutes. › In the meantime, mix two tablespoons of butter with one clove of garlic that has been peeled and crushed. › Brush the mixture over slices of bread, place on a broiler pan and set aside. › When ready to serve, add the shrimp to the stew and cook for a few minutes, then add the bars of fish (which will slowly break apart into bite-size chunks as they become tender) and continue cooking for about 10 minutes. › Put the bread under the broiler and toast until golden brown. › Ladle the stew into bowls and top with one slice of toasted garlic bread.