Outside of the South, the term Cracker is often associated with negative connotations, but the name reportedly harkens back to a time when Florida was the leading state for cattle production in America. 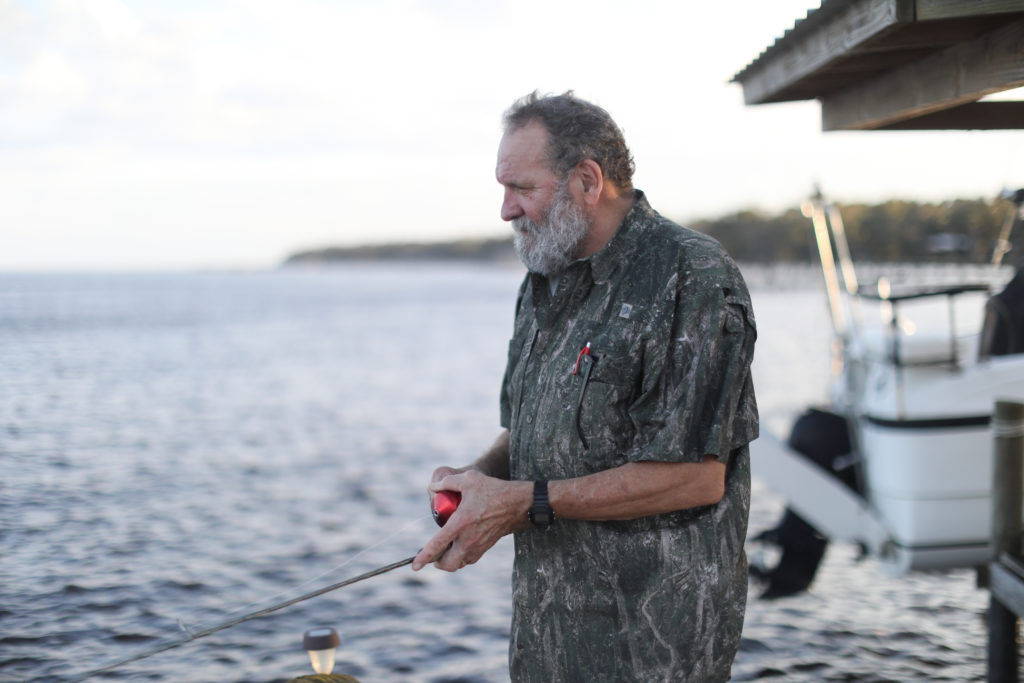 The men who loaded the cattle onto ships, bound for Northern states, were often called “cracker cowboys” as they used whips rather than lassos to herd their cattle. But over the years, the term grew to encompass the wider lifestyle of the pioneering families who occupied the state for many generations. Theirs is a proud heritage of hard working, plain-spoken, down-home folks, many whom continue to grow, fish and hunt for their food to this day. And although Cracker cooking often favors a simplicity of ingredients, born out of the native flora and fauna, the cuisine has been influenced by many cultures. It is essentially an evolving American fusion cuisine of those who live off the land and have passed down recipes and techniques from generation to generation.

It is both a birthright and passion for Russell Baillie, whose ancestor Peter Carr Baillie arrived in the States in the early 1800s from Scotland.

“I’m fifth generation,” he declares. “I was born right here in Ocala and raised in the Ocala countryside. The whole family was in the woods for most of my life. We had 52 acres growing up. We grew all kinda crops. We always had horses, cows and goats. We did a lot of Cracker cooking. We cooked whatever we could get from the land, corn, okra, tomatoes, wild hogs and deer. One of the things I like to cook is Swamp Cabbage,” he continues. “The real name is Sabal palmetto or cabbage palm. It’s the state tree. You don’t go out and kill them. But when somebody gets a permit to clear some property, I’ll go there, cut the tops off of them and take the swamp cabbage out of them. It’s commonly called hearts of palm. You’ll see it in cans at the grocery store. Most of that comes from South America, but these are native to Florida. They don’t yield a whole lot. The top will weigh something like 40 to 50 pounds, and you may get 4 to 5 pounds of edible stuff out of that.”

Although it sounds like a lot of work to you or me, Baillie says that it is well worth the effort.

“A lot of people just eat them as they are,” he says. “I usually stew it with a little bit of fat-back like salt pork, bacon drippings, onion and diced carrots. That’s pretty much how you make Swamp Cabbage Stew,” he offers. “Most people have never tasted it, even if they’ve lived in Florida for a long time.”

Baillie learned to cook and the tradition of community service at his father’s side.

“I’ve been cooking since I could get around,” he says with a chuckle. “My father was the county agent for the agricultural extension system here in Marion County and was also appointed Sheriff, so he was very well known,” Baillie recalls. “He would do fundraisers for charities, big barbecues where we cooked for as many as 5,000 people. We used to build barbecue pits and cook all kinds of meats. We’d also boil the corn, make coleslaw and baked beans,” he continues. “It was not something we did for profit. We raised a lot of money for various charities, created some good will and enjoyed doing it.”

They even got a chance to rub elbows with some of baseball’s all-time greats. 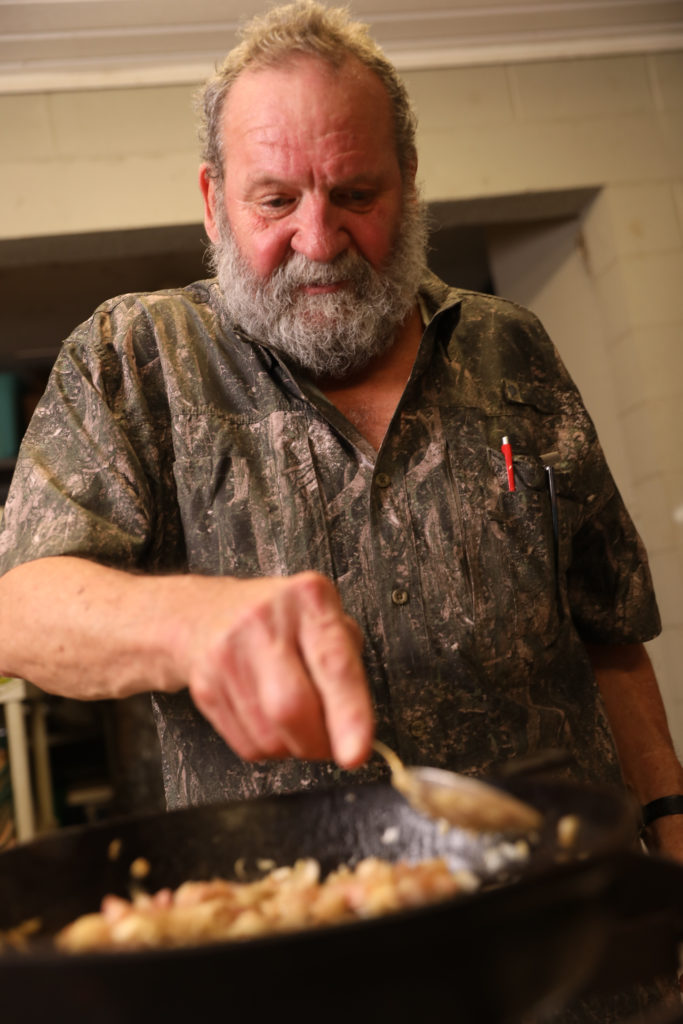 “Back in the bad old days of the late ‘50s early ‘60s, the Boston Red Sox had a spring training facility here called Webb Stadium and Gerig Field,” he recalls. “Once a year, the Yankees would come for an exhibition game with the likes of Mickey Mantle, Yogi Berra and Whitey Ford. After the game, my father would do a big cookout at the Ocala Golf Course. I was 8 or 10 years old and there helping my dad out.”

Baillie also followed in his father’s footsteps when it came to his profession.

“He and I were both bail bondsmen. He started in 1961, and I joined him in 1981,” he recalls. “That’s the main thing that the Baillies are known for around here.”

Although both father and son may be equally well known for their good cooking and good works, Baillie has carried on his father’s tradition of serving the community.

“I’ve done a lot of big cookouts out at Silver Springs for several thousand people,” he explains. “Recently, I started doing the low-country boils, where you have the crawfish, shrimp, crabs, onions, corn and potatoes. You cook it all together in a seafood base. I’ve done several private events, weddings, birthday and anniversary parties. I did Paula King’s birthday party. It was a big bash. I cooked the barbecue, but I also made a New Orleans bread pudding. It’s different from most bread puddings and served with a whiskey sauce. It comes from Paul Prudhomme’s cookbook. You make it out of French bread that you buy four or five days ahead of time. You let it get stale and then cut it up into chunks. I always put raisins in mine. I soak them for a night or two in some rum in the refrigerator. For the whiskey sauce, I use Old Grand-Dad 100 proof, because it has some good flavor to it.

“This is one of my favorite cookbooks,” he offers, handing me an unassuming and well-worn book entitled The New American Cook Book, which was published in 1942 in, of all places, New York City. “It was a wedding present given to my mother. It has a whole bunch of great old Cracker recipes in it.”

Although the irony is not lost on him, this is not his only culinary guide.

“I have 72 cookbooks in my walk-in pantry and probably a couple dozen more around the house,” he admits. “I’ve even got Martha Washington’s cookbook. This is another of my favorite cookbooks,” he continues, passing a copy of Cross Creek Cookery to me. “I’m a big fan of Marjorie Kinnan Rawlings. Every recipe has a story with it.

“Another big cookout we had was for our wedding,” he explains of his nuptials to Jaye Baillie, who is the executive director of the Marion Cultural Alliance located at Brick City Center for the Arts. “We were married in 1977, and instead of having a rehearsal dinner and reception, we had the Jaye-Russ BBQ the day before the wedding. We had 400 guests, and my father cooked, so I got to take the day off. After the wedding we took off to Key West for our honeymoon. That’s when I got into cooking a lot of seafood.” 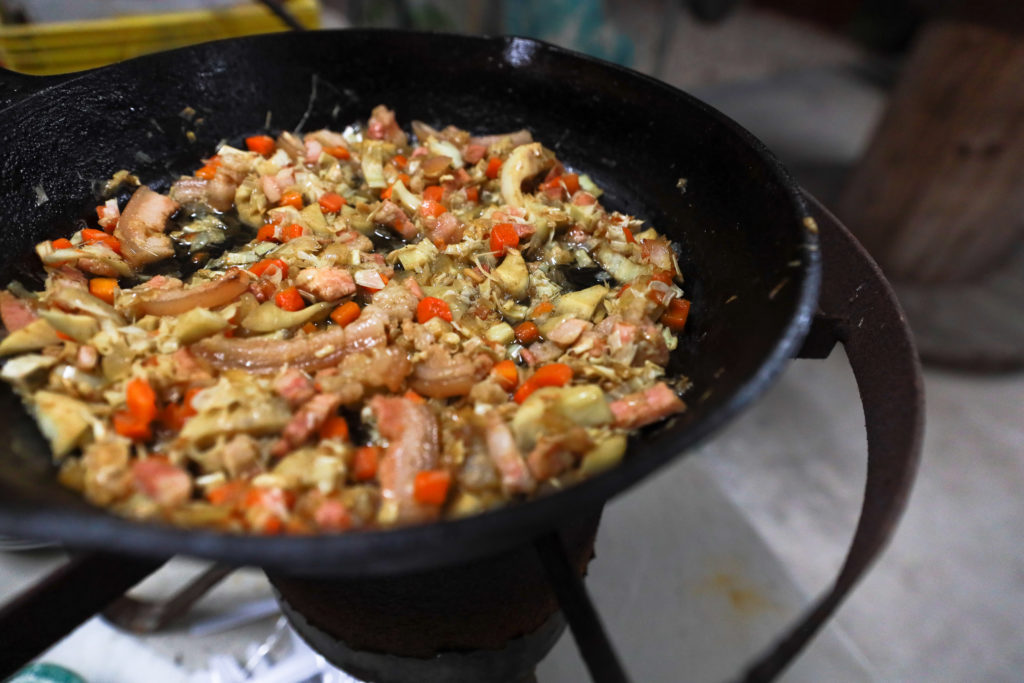 Baillie also grows a variety of fresh herbs, from fennel, basil and oregano to tarragon and mint.

“We always have a big Derby party and make Mint Juleps. You actually cook them,” he offers.” You take the bourbon with some water and warm it up. Then you stir in confectioners sugar, and let it steep for a while. Then you pour it over the shaved iced and the mint. And that makes a perfect Mint Julep. A lot of people just pour some bourbon and mint extract in a glass and call that a Mint Julep, but you actually have to cook the bourbon to make it come out right.”

And although Russell often finds himself on the golf course, it may not be for the reason you’d think.

“Cooking is a diversion for me. Some people like to play golf, I’d rather cook,” he explains of the many cookouts he’s hosted at the Ocala Golf Course. “Course, I’ve never played golf.”