For some of us, our first cooking experience was the macaroni and cheese we subsisted on in college. Others were lucky enough to be gifted an affinity for cooking from a mom or grandma who expressed her love through her food. For Sagi Asokan, cooking was a grand experiment she started as a young adult. 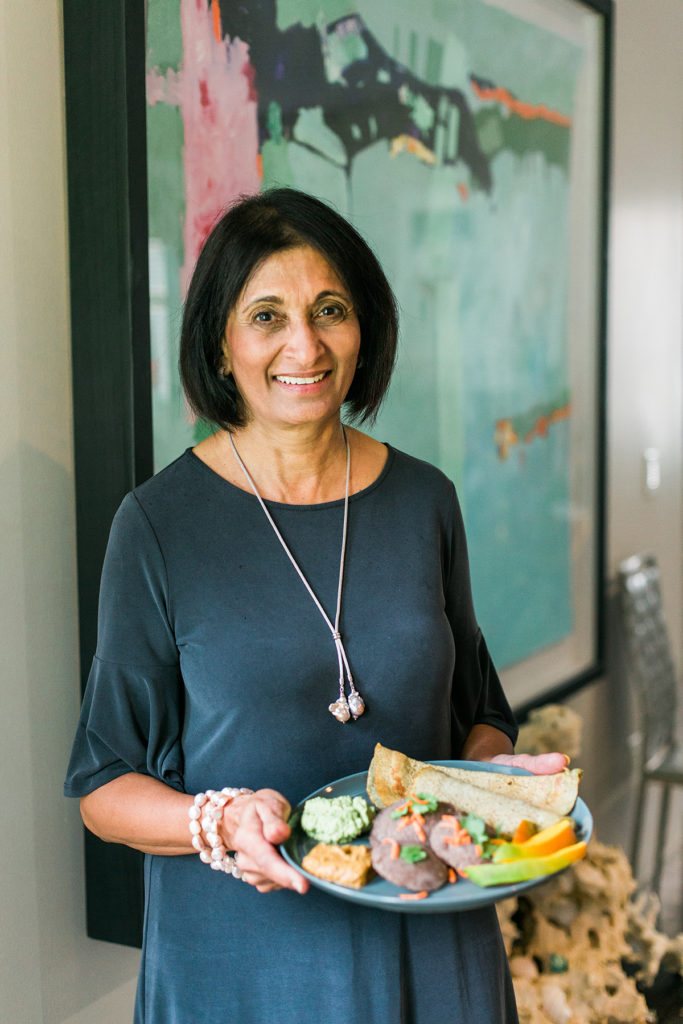 To say she’s a self-taught cook would be an understatement. The native of India has perfected her Indian fusion style that features colorful, fragrant herbs and spices that complement fresh and diversely-textured vegetables.

“I never liked frozen vegetables, I always liked fresh,” Asokan explains, adding that she almost never uses packaged convenience food. “I normally make my own,” she offers, which actually means that she makes everything from scratch—from dried beans and lentils to cucumber sauce—and even yogurt. Yes, she makes her own yogurt!

“That’s pretty common among Indians,” she explains, adding that she is currently making yogurt from a live starter culture she’s had for about three years. “I got it from my sister, and my sister got it from somebody who brought it from India.”

Back in the 1970s, as a new bride in a new country with a husband finishing medical school, Asokan had time to thoughtfully recall the dishes she remembered from back home and then adapt them using ingredients she could find here in the United States.

“In those days, they didn’t have too many Indian groceries available so I started mixing whatever was available. I got to be kind of resourceful and that’s how I learned and changed my cooking.”

Plant-based diets and shopping the perimeter of the grocery store are common recommendations for healthy eating in today’s society. Farmer’s markets and produce stands are enjoying a moment as they’re discovered by a new generation, but that’s nothing new for vegetarian Asokan.

“I just go buy whatever is fresh and put it in the refrigerator. I see what I have and I just make up the recipe,” she admits, adding that rather than follow a recipe she likes to be inspired by what’s in season. Her go-to meals these days are her versions of Indian staples that include rice, lentils, vegetables and herbs.

Growing up in a traditional middle-class Indian household, Asokan and her five sisters weren’t involved in meal preparation; as was the custom, they had domestic help. She has fond memories of weekly gatherings of family and friends.

“We’d cook once a week,” she says. “My father usually invited all his friends and they would play cards. We would all get together as a big family. They would make different types of meat and special dishes and we would all have dinner. That’s the one I always remember.”

Asokan continues that family tradition of weekly gatherings; she and her husband, Dr. Rangaswamy Asokan (known to friends as simply “R. Asokan”) host a Wednesday night dinner in their Southeast Ocala home. Asokan, president of Fine Arts For Ocala (FAFO), serves everything on unique artisan dishes she’s purchased over the years at the Ocala Arts Festival.

“I cook one or two dishes, my husband does the meat, and everybody else brings something. We take turns, everyone shares and it’s like a potluck dinner,” she says of the tradition they started about 16 years ago when she invited one friend, David Gadlage.

“His partner passed away and he was the cook in the family,” Asokan explains. “So I started inviting David. I asked him to come to dinner every Wednesday.” Other friends joined along the way, like Mary Alice Adkins, whose elderly husband had passed away.

“They are the regular people and then I have some people in between,” Asokan reveals. “Everybody who comes says, ‘Do I get invited again?’” She laughs. “I don’t think we’ve ever had a bad meal.” 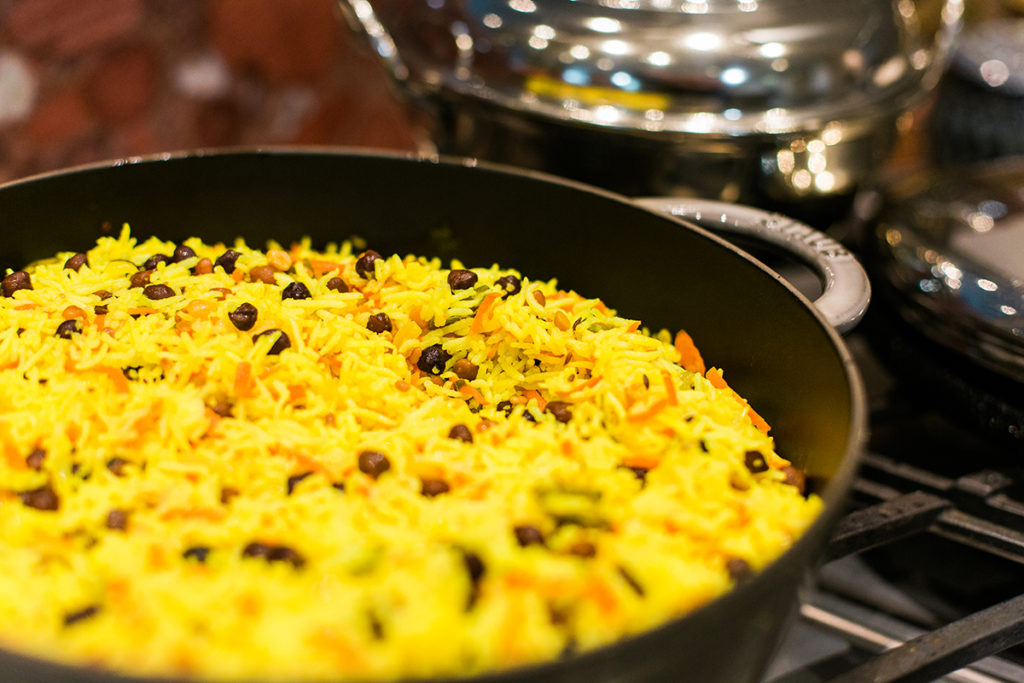 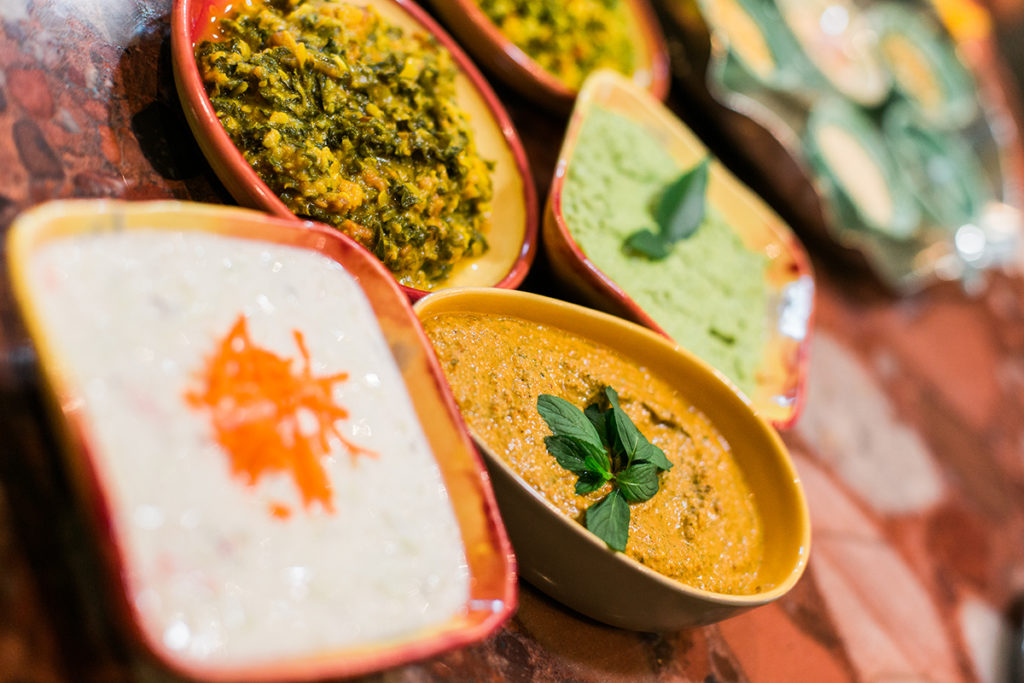 Mix all ingredients together and salt to taste. › (Tip: choose regular or Greek yogurt, depending on desired thickness. Sagi likes to mix half regular yogurt and half Greek yogurt.) › Serve immediately or refrigerate.