A long-standing family farm was honored in January when Baldwin Angus Ranch was chosen to kick off the 40th anniversary promotion of the Certified Angus Beef® brand. 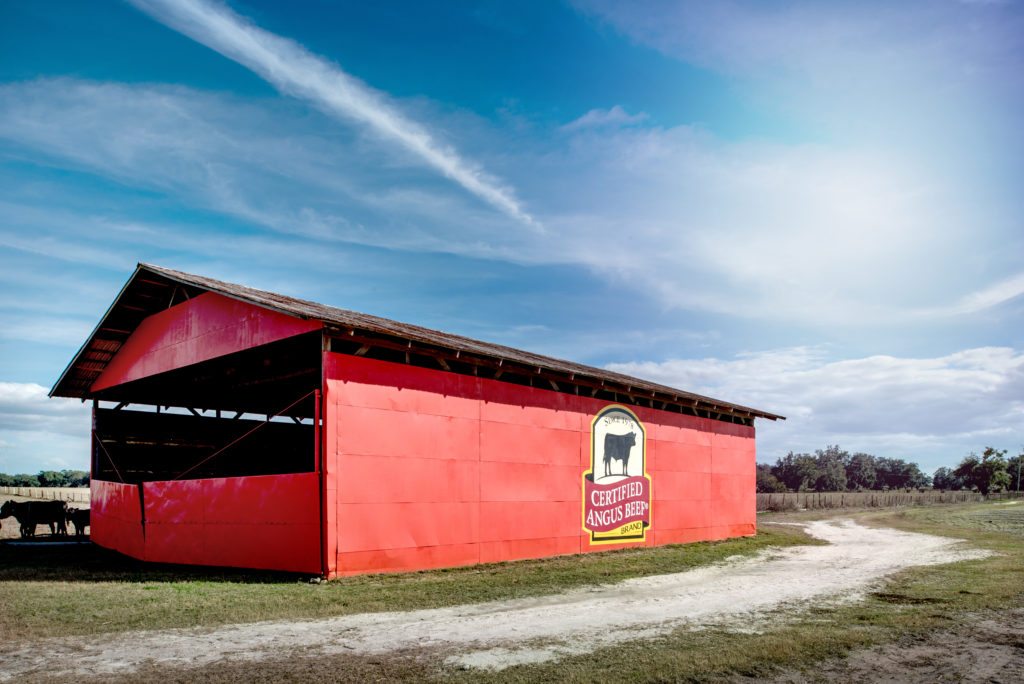 Artist Scott Hagan painted the brand logo on the Baldwins’ large red barn fronting I-75 between Highway 326 and 27.

Hagan, who grew up on a cattle farm in Ohio, painted his first barn in 1997 and has since painted hundreds of barns in 19 states.

Only the best of Choice and Prime grades Angus beef is even considered for the label, and then only after it’s passed the rigid standards of independent, unbiased U.S. Department of Agriculture graders. To celebrate the fact that the Certified Angus Beef ® brand has been around for four decades, 40 farms/ranches across the country that raise premium Angus were chosen to have the label painted on a structure, and Baldwin Angus Ranch was the first.

The late Leroy Baldwin, who passed away in December 2016, started the operation when he bought his first registered Angus cow back in 1947. The 600-acre ranch, which borders I-75 just north of Ocala, raises Angus breeding stock and is owned by his daughter, Joy Baldwin Papy, and his brothers, Alan and Tony Baldwin, their families and Leroy’s wife, Sharon.

“We have about 200 head altogether, including 75 mama cows,” says Joy, who enjoys moving those cows on and off the rye pasture with the help of her trusty Border Collie, Lou.

“It’s a very big honor to be chosen because there were many applicants,” relates Joy.

Before the artist could recreate the logo on their barn, all the Baldwin kids and grandkids had to make a “clean slate,” as it were. The 40×60-foot hay and equipment barn was built in 1972 and has proudly displayed the name Baldwin Angus Ranch ever since. But prepping it for the artist meant sanding down the entire barn and repainting it a classic barn red.

“We hated to remove that sign, but we had to get the barn ready,” says Joy. “Even the grandkids pitched in to help. It was a big project.”

On January 17, the artist completed the project, and the day was marked with a ranch-style celebration that included, of course, ample helpings of Certified Angus Beef ®, courtesy of Sonny’s BBQ, which catered the event. Ocala mayor Kent Guinn was in attendance, along with numerous media, restaurateurs and representatives of the Certified Angus Beef ® brand, the Florida Cattlemen’s Association and Sysco meat suppliers.

“Over one billion pounds of Certified Angus Beef ® were sold in 2017; the brand just keeps growing,” says Joy, who, along with her family is proud to be one of the many family-owned operations that help supply that tasty beef.