Walk through the door of Ocala’s Chocolate & Confections and you’re enveloped in the heavenly scent of chocolate and dazzled by row after row of hand-crafted creations.

It’s a visual and aromatic feast even before you enjoy the ultimate pleasure of tasting. 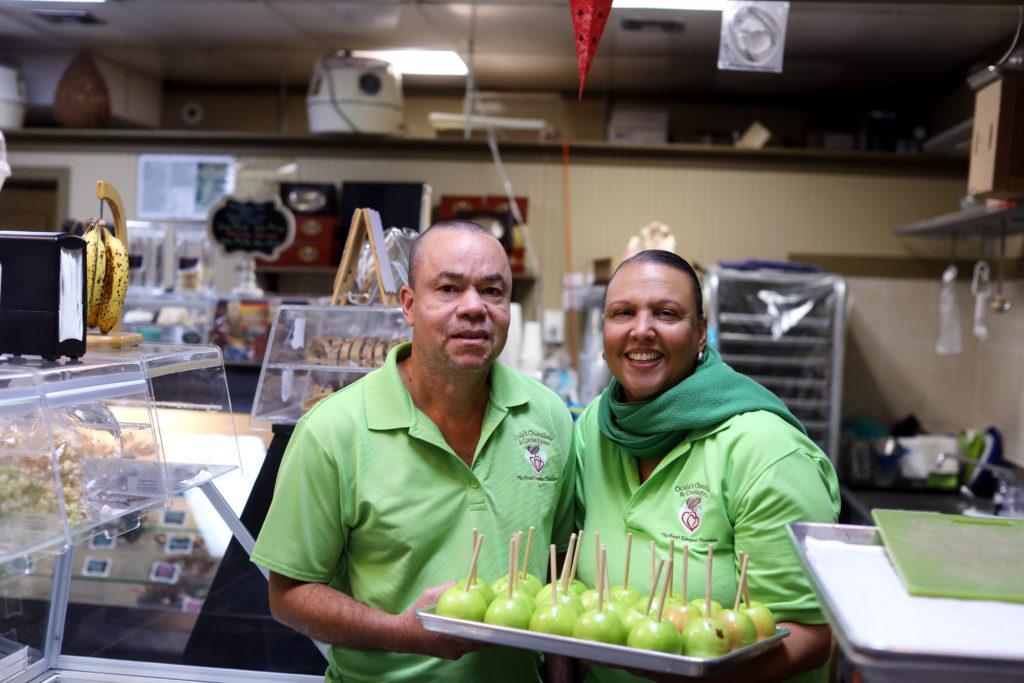 Owners Keith and Kerryann Terrelonge opened their shop for business on February 13, 2009, so Ocala’s Chocolate & Confections celebrates its 10-year anniversary this month.

It was Keith’s Jamaican heritage that influenced his eventual decision to go into chocolate as a career. His grandparents were coffee and cacao farmers in Jamaica, and it was from his family that he learned to make chocolate and ice cream. Keith studied agriculture and worked in the country’s dairy industry for a time before moving to the United States.

Having their own shop has given Keith the opportunity to hone his chocolate craft to perfection. Yes, it’s hard work and long hours, but for Keith, chocolate making is a passion. He relishes the opportunity to explore new ideas and come up with unexpected creations and combinations of ingredients. 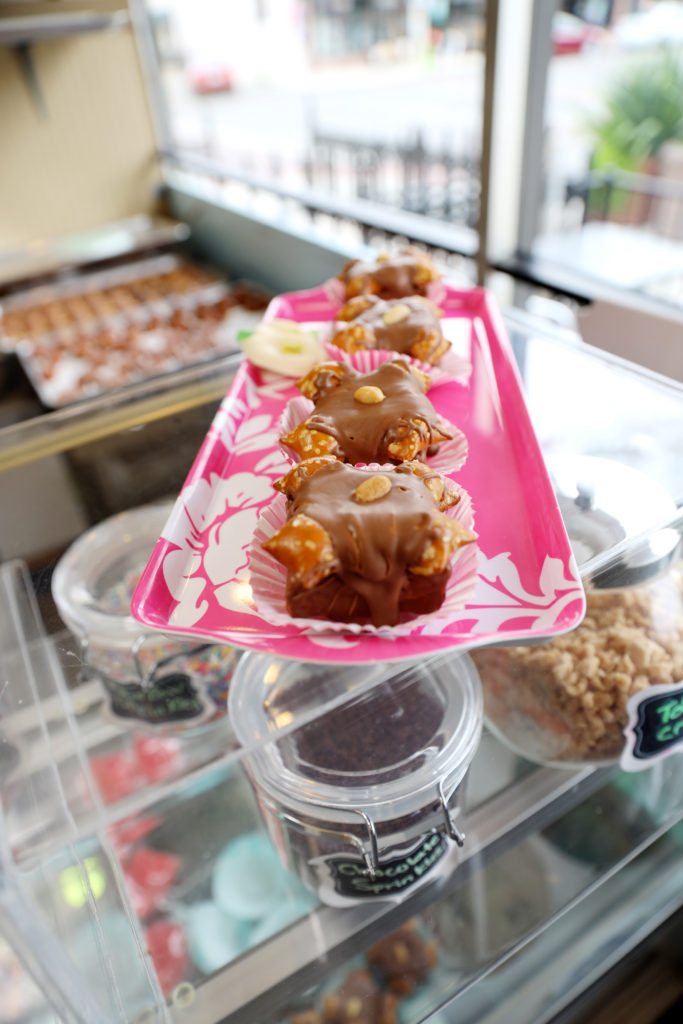 All of the decadent creations are handmade, and many of them require considerable time and effort before taking their rightful place in the gleaming glass display case.

Take, for example, the shop’s truffles, one of their best sellers. Making one painstaking batch at a time is a three-day process. Keith admits these are the most time-consuming of all his chocolates.

Because he doesn’t use flavored chocolate, it takes the entire process to get the finished product just right. The first step is making the milk-based filling, to which flavor is later added. Keith then makes the “cell” of the truffle, prepares the ganache coating and pipes the filling into the hollow truffle, each of which is coated twice in the rich ganache.

Bite into one of these lush treats and you’ll appreciate Keith’s dedication to detail.

“We’re known for our truffles and our fudge,” says Kerryann, adding that they both come in a variety of flavors.

For florists and chocolatiers, Valentine’s Day is one of the busiest times of the year.

“The No. 1 request we get is for chocolate-dipped strawberries, so we are continuously dipping fresh strawberries,” says Kerryann. 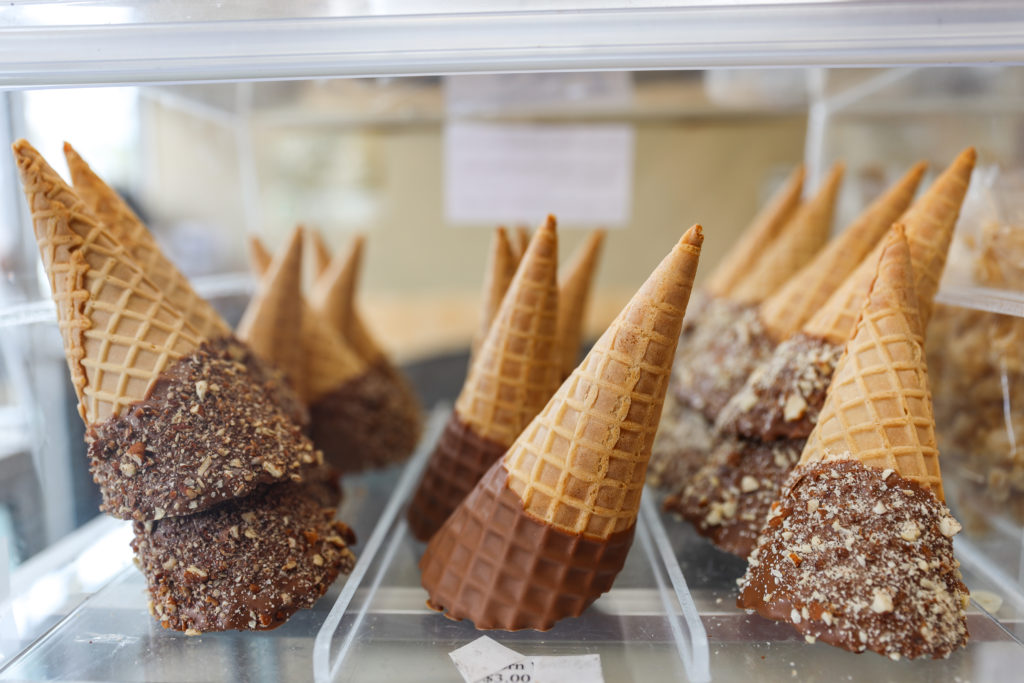 She notes that they’re happy to make special order chocolate items, whatever the occasion.

“We’ve made graduation caps out of chocolate, and even made chocolate statues that look like the Oscar for a customer who was having an awards dinner. Some companies like to promote their business with a logo made from chocolate.”

Virtually anything can be made with a little time, Kerryann assures.

Ocala’s Chocolate & Confections occupies a small footprint in downtown Ocala, but there’s plenty going on within its walls. Remarkably, there are close to 200 different products, and, of course, everything contains chocolate to some degree.

Keith uses European chocolate because it’s ranked among the best in the world, and he loves to put his own twist on everything he makes. Some of the treats are his own invention, such as the torch cone. Filled with marshmallow and covered in milk and white chocolate with a touch of sprinkles, it’s Keith’s own take on the torch held by the Statue of Liberty.

It’s impossible to pick one favorite from the dozens of beautifully presented chocolate delicacies. Customers have their preferences, of course. Many crave the peanut butter krispies, Keith’s upgraded version of the old childhood favorite that includes peanut butter, pretzels and sea salt.

Kerryann says the ever-popular peanut butter cups sell out as soon as Keith makes them. 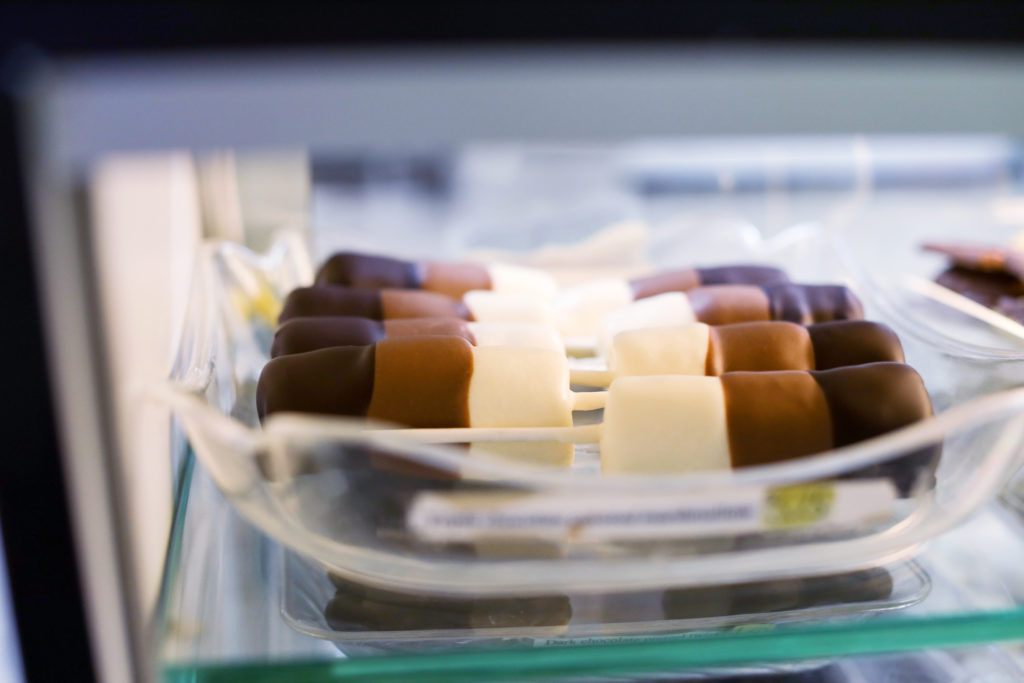 It can be overwhelming to choose just one thing. If you can’t make up your mind, Keith may offer you a sample taste to help you decide. He’ll also reassure you that good dark chocolate contains heart-healthy antioxidants—as if one needed encouragement to consume!

Keith and Kerryann are excited about the next phase of their business, which has been two years in the making and will be unveiled by mid-2019.

“We’re preparing a food truck so we can take our chocolates and ice cream and be mobile for catering,” says Kerryann, noting that their chocolate fountain is always a popular request. “We’ll be able to do private and business events on site. We’re happy to be here. Downtown is growing, and we hope to grow, too.”