Christie and Nick Carrera, the co-founders of Urban Asado, which makes handcrafted grills, will be bringing a unique grilling experience to the Ocala Culinary Festival as they participate in the Una Noche en Argentina feast on March 27th. The outdoor event, which will focus on the cuisine and wines of Argentina, will include four chefs from St. Augustine. 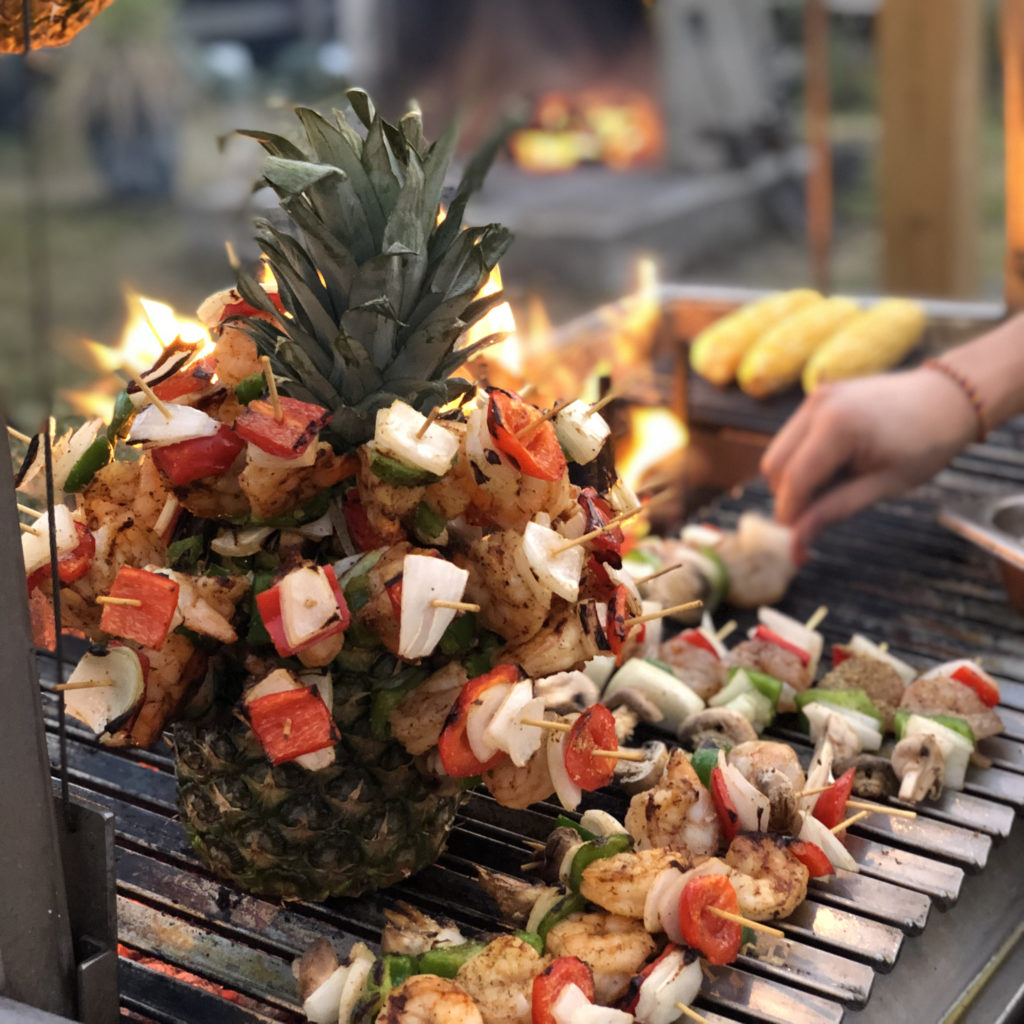 Until the mid-19th century, huge herds of wild cattle roamed much of the Pampas region of Argentina, with its especially fertile soil. In turn, an appetite for beef, especially asado—which is roasted beef, lamb or goat—grew among the inhabitants of the Río de la Plata, particularly the equestrian gaucho (traveling horsemen, similar to what we call cowboys).

But asado is more than simple grilling or barbecue, it is a beloved traditional form of roasting. Skewered on a metal frame called an asador, the meat, which often takes the form of a side of ribs, is roasted by placing it next to a slow-burning fire. Historically, metal “crosses” (asadores) were also employed to hold meats and vegetables vertically and still receive the heat from the fire, while grilling al asador. The original grills were portable and ideal for those who wanted to transport their BBQ wherever they pleased.

In addition to the grilled meats, an asado meal typically includes wine, a simple mixed salad, bread and grilled vegetables seasoned with olive oil and salt. Grilled or fresh fruit is commonly served for dessert. More than a heritage technique, the term asado also is used interchangeably to refer to the actual social event as well.

We caught up with the Carreras to learn more about the evolution of their brand and what they have in store for the festival.

How did Urban Asado come to be?

Christie: Nick’s dad is from Argentina, so he has memories of growing up with asados as a kid, at the house and with family and friends. We knew that was the life we wanted for our kids. We both had, what I would call, “grown-up” jobs. I was operations manager in the medical field and Nick was the director of operations in the building materials industry. Nick had always dreamed of owning our own business, but the opportunity had never presented itself. When we had our kids, we realized really fast where our priorities were and what we wanted to create for our kids. 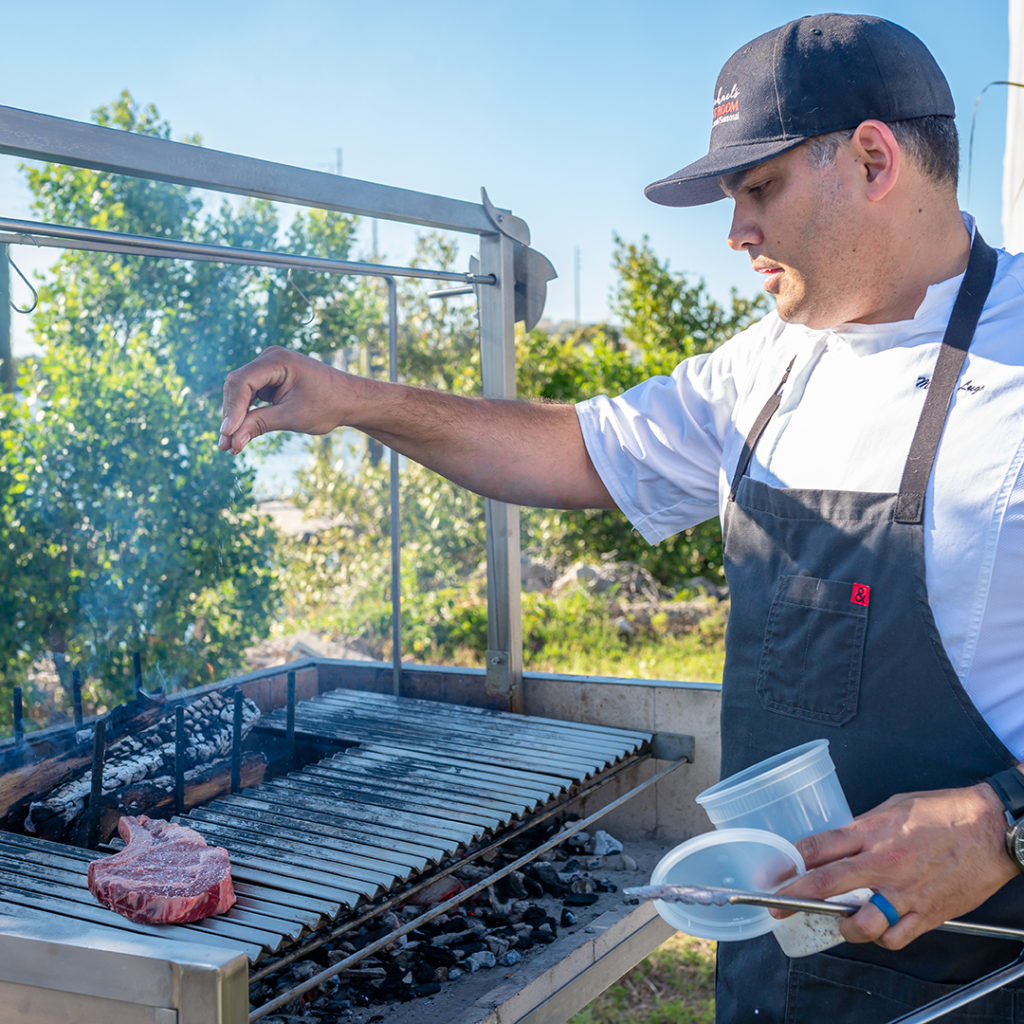 Nick: We really wanted to do something that was inspiring, for ourselves but also our kids. We talked about creating something more than a product, like…‘What does the product inspire?’ That helped us. It adds more layers to it, so it just doesn’t feel like work. You know the expression, ‘If you do something that you love, then you’ll never work a day in your life.’ It sounds wonderful and it’s kind of true, but it’s still a lot of hard work. This is something that we are very passionate about, seeing people’s reactions…grilling with customers, things like that. It’s always breathing fresh air into it. Once we decided to go for it, we saw that people would share in our passion.

Our first year, in our current fabrication studio, we went through two hurricanes. St. Augustine got pummeled. But, in a weird way, that helped solidify everything, because we ended up doing fundraisers, supporting other small businesses that were affected and so it spearheaded the communal side of building our business. It’s had its challenging moments, but we’ve been able to create what we wanted. It was more like creating a family, which is something that inspires people beyond just the idea of making a grill. ‘Experience Grilling’ is our big thing. I try to get people’s attention with that phrase, like, What does it mean? When they usually see the grills in action, they’re like, ‘Oh, OK, I get it.’

Tell us how you decided to create the Chefs Collaboration Series and what it entails.

Christie: We wanted to allow the community to experience these types of grills, so we wanted to work with local chefs. We wanted this social and collaborative thing. We met Chef Michael Lugo and explained our vision and he jumped on board. What’s really cool is that we’ll be bringing four chefs, including Chef Lugo, that represent three different restaurants in our city to the festival for our event. They all have their own restaurants and brands, but come together and create these big fun asados.  They also represent various heritages and lifestyles. Michael is from Puerto Rico. Marcel is from Peru. Norberto is Columbian. And Natasha is South African and she’s vegan. 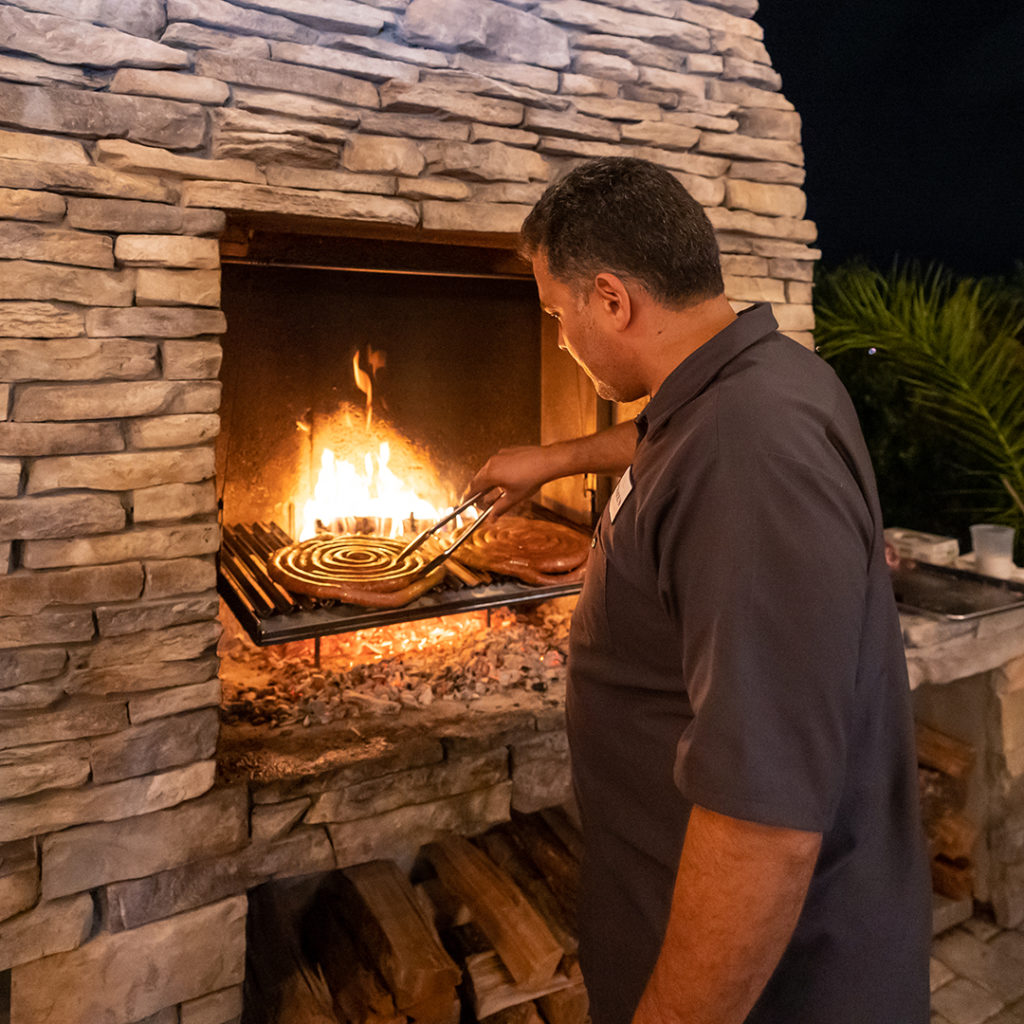 What’s the experience attendees can expect based on this style of grilling?

Nick: The signature component of our grills is the V-grate grilling surface. The Argentinian design is to capture the juices that would otherwise be coming out of the meat, hit the coals, and cause a flare-up or just get wasted. The design of our grill is to channel those juices to a drip pan, to eliminate the flare-ups that can negatively impact the flavor of the meat, but also to channel the juices into a pan so that you can baste the meat in its own juices.

The wood fire is the secondary aspect of it. With the fire basket, you’re able to burn the wood, and basically to create your embers and your coals to grill with for a prolonged period of time. You have this separate area for the wood to be able to burn through the bottom of the basket and you’re able to rake the coals into place and grill over freshly produced embers. So you get that really great flavor, that unmistakable wood-fire grilling flavor. But if you grill on a gas grill or any regulated-temperature type of appliance, you set that dial and you know that the temperature is consistent. When you do live wood-fire grilling, there’s a lot of personality that gets injected into it because there’s these little variations in temperature. As the coals are burning, you get this kind of variations. With vegetables and fruits, the sugars release at intervals, not consistently. And with meats, it’s the same thing. That’s where you can taste that difference.

Ultimately, we wanted to create a modern, stylish take on something that was very rustic and have it still feel at home, whether it’s on a rooftop deck in Brooklyn, a polo ranch in California, a beachside restaurant in Miami or a cul-de-sac neighborhood anywhere. This style of grilling also really does bring people together. It creates a very communal kind of atmosphere. We made it approachable because we like how it brings family and friends together.